The Challenge of New Immigration

The early years of the new century were marked by political unrest in Canada. Continued tension between Britain and the United States resulted in war in 1812. Relations between the old and new inhabitants of what had been New France remained uneasy. The struggle for responsible government led to armed rebellion in both Lower and Upper Canada in 1837-38 and to movements toward independence or toward annexation to the United States. The passing of the Act of Union in 1840 did not remedy these problems as evidenced in the burning of the parliament buildings in Montreal by an English mob after the signing of the Rebellion Losses Bill in 1849.

A change that would have more lasting significance, however, was the beginning of a vast increase in the population of Canada due in large part to immigration mostly from Ireland and Scotland. For many of these newcomers, emigration was a desperate attempt to escape from conditions of grinding poverty in their homelands. Between the end of the 18th century and the early 1860s the population of British North America went from a quarter million to more than three and a half million. In what is now the Province of Quebec the area most affected was Montreal whose population went from 9,000 in 1800 to 58,000 in 1852. Its geographical position made Montreal the communication and transportation centre of Canada. Its port grew in this age of the steamship and the new railways began to be built. The growing population found work in the lumbering and construction industries and in the new industries arising to support their needs.

The deprivations that had marked their lives in their homelands and the often horrendous conditions they faced on the voyage to Canada sometimes meant that these newcomers inadvertently carried with them diseases that then spread to the local population, like the cholera epidemic of 1832 and the typhus epidemic in 1847. 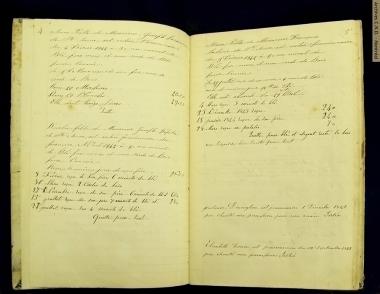 Pages taken from the record of accounts of the convent boarders 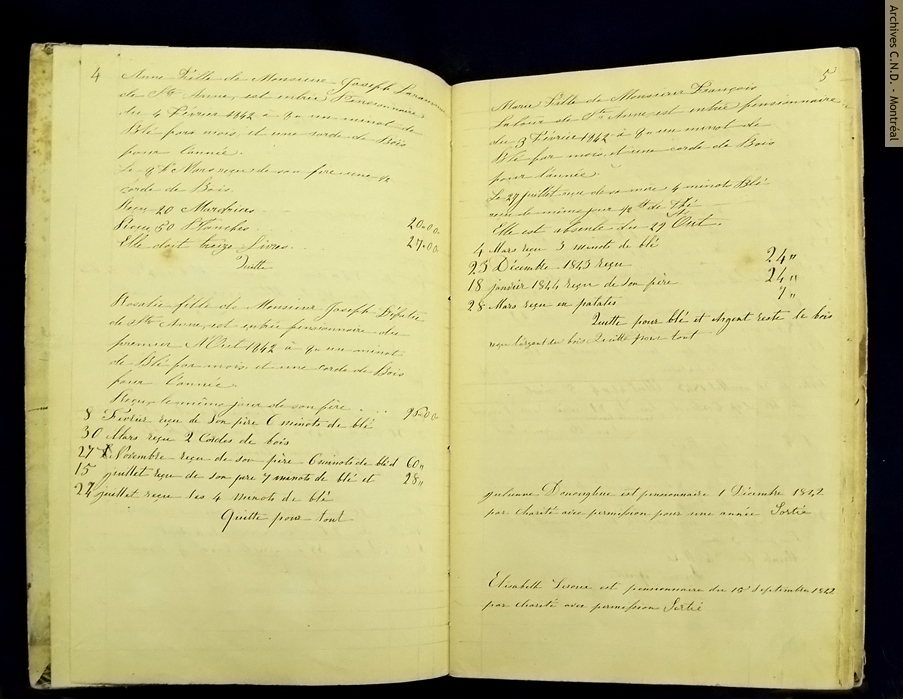 Pages taken from the record of accounts of the convent boarders, Terrebonne, Canada East (Quebec), 1842.

It was not unusual for families to pay their daughters boarding expenses in kind rather than in cash, especially in rural areas. On these pages are listed cash payments but also minots or bushels of wheat, cords of wood, boards, beams and tea. One student benefited from a year of free boarding.

The Challenge of State Regulation

State intervention in education, already a fact in Europe and other parts of North America, began in Canada in 1801. A law passed in that year was intended to create a kind of ministry of education in the attempt to establish a system of state-supported schools. That attempt and several that followed it met considerable opposition, in part because of the not unjustified suspicion that such schools were to be used to anglicize and Protestantize the population of Lower Canada. A new law in 1841 aimed at establishing a network of public schools to be governed by a Superintendent of Education appointed by the governor and municipal councilors some appointed, some elected. The following year the governor named two superintendents, one for Lower and one for Upper Canada. Finally, in 1846, a law that would have greater permanence came into effect providing for the election of all the councilors and, like the previous laws, maintaining the rights of religious minorities to their own schools.

Clergy and members of religious communities were exempt from the obligation to take qualifying examinations as teachers, as, at least initially, were female lay teachers. The authorities recognized the value of the long experience of both the Ursulines and the sisters of the Congregation in education and the informal training of teachers. Both groups had encouraged young women educated in their boarding schools to share the fruits of that education in their home villages. In 1836, therefore, the government agreed to pay for the education in the boarding schools of several young women preparing to be lay teachers, six with the Ursulines at each of Trois-Rivières and Quebec, seven with the Congregation in Montreal. 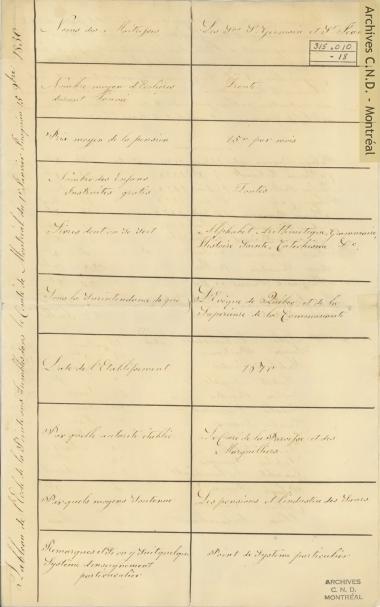 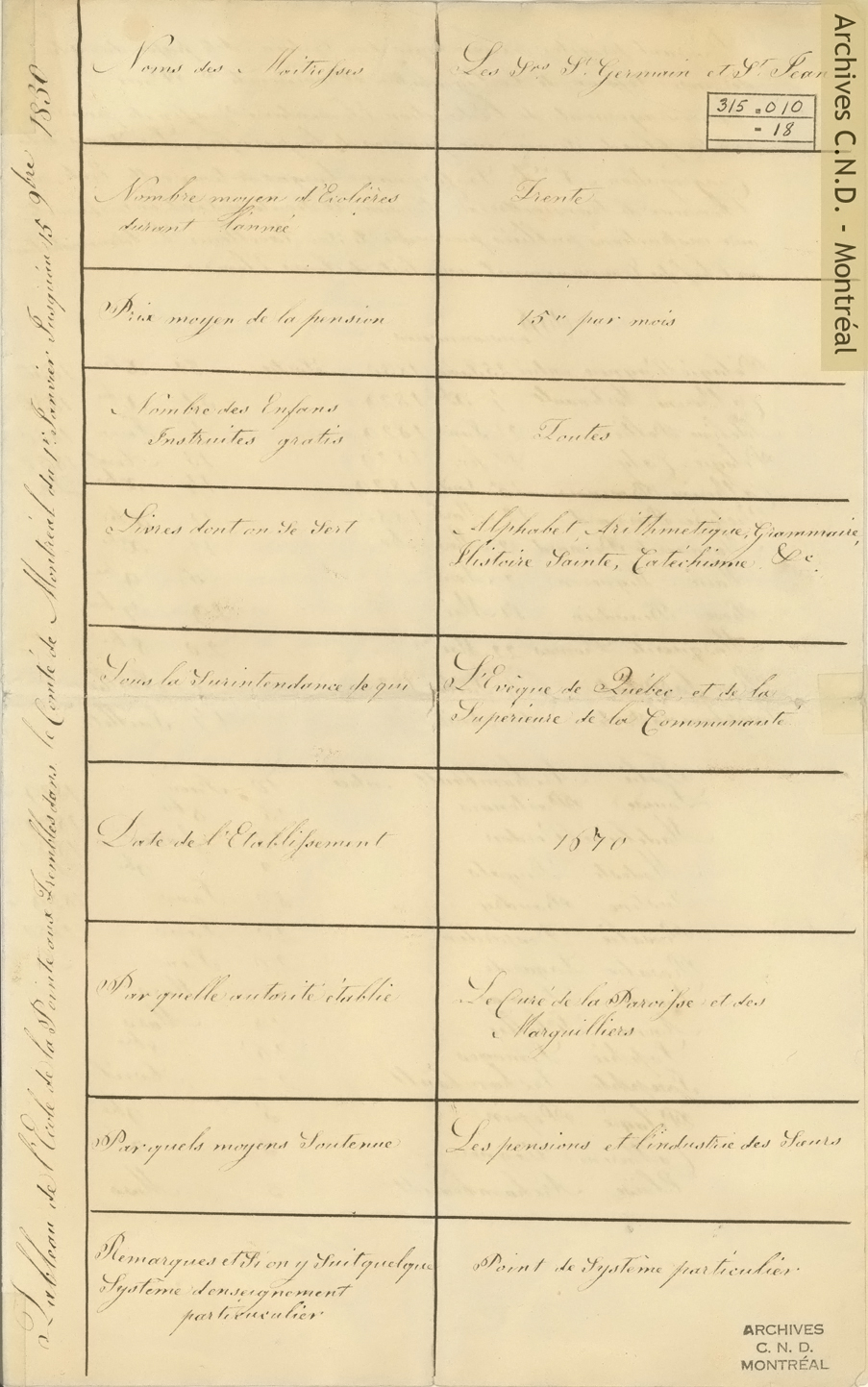 The Challenge of Expansion

In 1821 Montreal became a diocese separate from Quebec and in 1840 Ignace Bourget became its second bishop. In the wake of the failure of the 1837-38 rebellion, in the face of an increasingly mounting population, he faced an immense challenge. Although immigration made French-speakers a minority in Montreal for several decades, Catholicism remained the religion of the majority because so many of the English-speaking newcomers were Irish. Besides struggling to meet the religious, educational and social needs of his diocesans, Bishop Bourget’s policies during the years of his long episcopate were directed toward the preservation of the language and identity of French Canadians and of the Catholic faith. He adopted several means for the implementation of these policies, among them the establishment in the diocese of religious communities of men and women from Europe and the foundation of new Canadian communities. In 1843 he officially removed the regulation that had limited the Congregation to eighty members and by 1849 the community had 139 members.

Increased membership was a pressing need of the Congregation at this time as the sisters were undertaking the opening of new missions and schools at an unprecedented rate: three in the 1820s, three in the 1830s and eight in the 1840s. The changing population meant that there were new needs to be met. The boarding school in Montreal included an English class in its new building opened in 1823. The sisters of the Congregation did not limit their efforts to the education of the elite. In the 1830s they accepted responsibility for two free schools in Montreal established and supported by the Sulpicians. In 1838 they also became teachers in two classes opened in the building adjacent to Notre-Dame-de Bon-Secours Chapel for the children of Catholic soldiers in the British regiments stationed nearby. In 1849, two classes for the children of poor Irish families were opened at the Mother House.

The new missions undertaken at this time were located not just to the east of Montreal, like Sainte-Marie-de-Beauce, but also to the west in what is now Ontario. In 1841, in response to an invitation from Alexander Macdonnell, first bishop of Upper Canada, and with the consent of Bishop Bourget, they began to teach in Kingston, the capital of a united Canada. 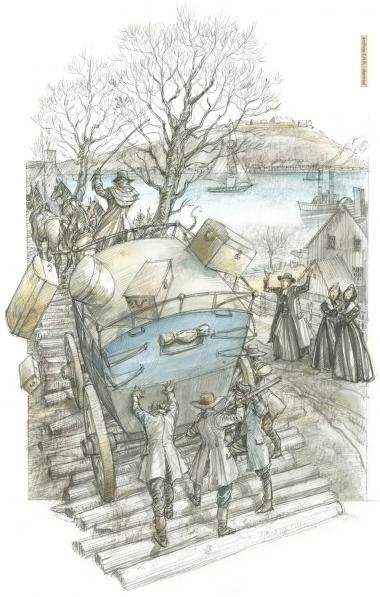 En route to found a mission 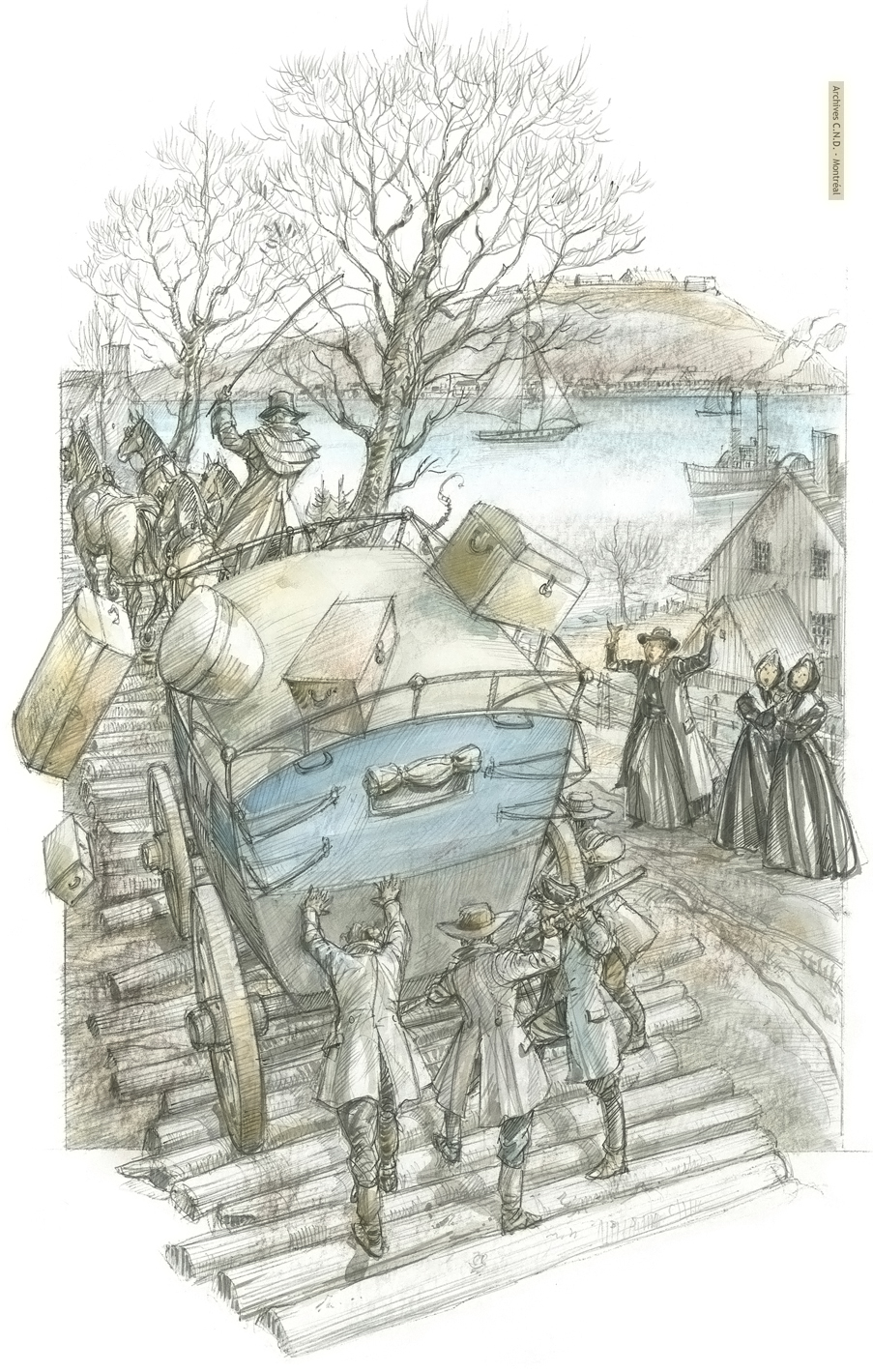 For many years, Msgr. Plessis, Bishop of Quebec and Msgr. MacDonell, Bishop of Kingston, had wished that the Sisters of the Congregation would establish themselves in Kingston, the city which was to become the capital of a United Canada. Two Sisters set up the Congregations first English-language school during this first venture in Upper Canada in 1841. The means of transportation were rudimentary at that time: it took three days for the Sisters to travel by stagecoach from Montreal to Kingston. The national capital from 1841 to 1843, Kingston, quickly lost its title to Montreal. Nevertheless, the Congregation was now firmly implanted in Ontario and would increase its presence there.

The changes taking place in local society as well as in the larger world were reflected in developments in the boarding school in Montreal. The families of its French-speaking students included both members of the old seigneurial class and also members of the rising professional and political class whose opinions were not always those of the bishop and clergy. Even before the introduction of an English class in 1823 there was an increasing number of English speaking students, many of them not Catholic, and these came not just from Montreal and the surrounding area but also from the United States. During this period, then, the Mlles D’Ailleboust, and Lanaudière, Papineau and Dorion, Panet and Deschambault, studied, lived and played with the Misses McGill and McCord, Griffin, Allen and McKenna. Among this diverse group were many future members of the Congregation.

Not just the clientele but also the curriculum of the boarding school underwent significant change at this time. Not just English but such subjects as geography, art and music were added. A prospectus for the boarding school enumerates the subjects taught as reading, writing, grammar, arithmetic, history, geography, rhetoric, the principles of chemistry and philosophy, sewing and embroidery. Music and art were extras. In so far as possible, these subjects were also taught in other boarding schools operated by the Congregation. 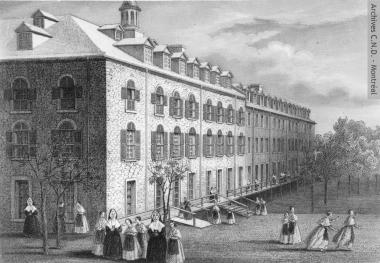 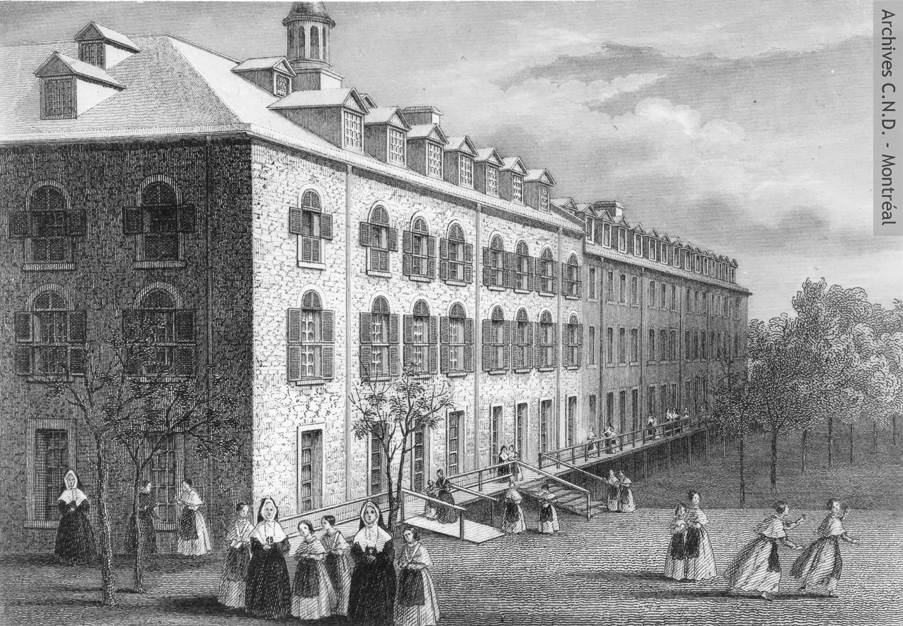 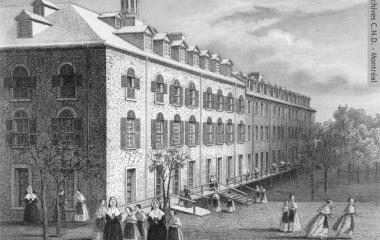 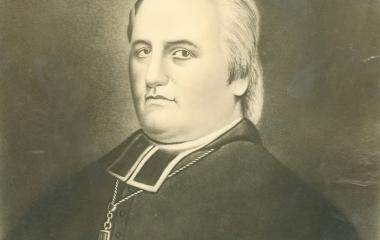 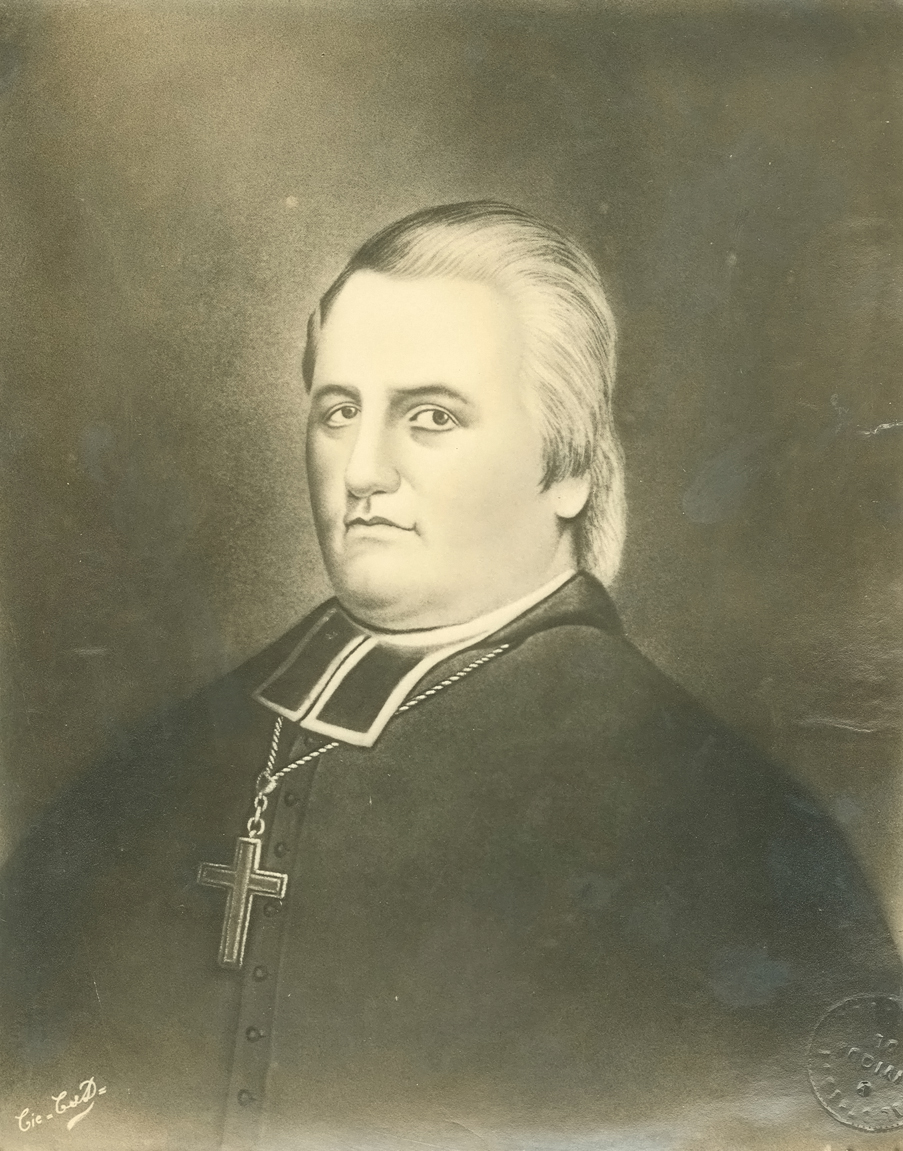 Joseph-Octave Plessis was born on March 3, 1763 in Montreal. Ordained priest in 1786, he was assigned to Notre-Dame Parish in Quebec in 1792, appointed Bishop Pierre Denauts coadjutor in 1797, and Bishop of Quebec in 1806. From 1814, he supported a drive by the Canadian party to obtain a new education act, of which a first version was approved in 1824. In 1817, he was named to the Legislative Council. He endorsed classical schools and colleges in urban centres as well as in rural areas. He died at the Quebec General Hospital on December 4, 1825. 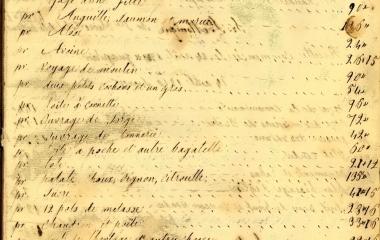 Pages taken from the expenditure record of the convent 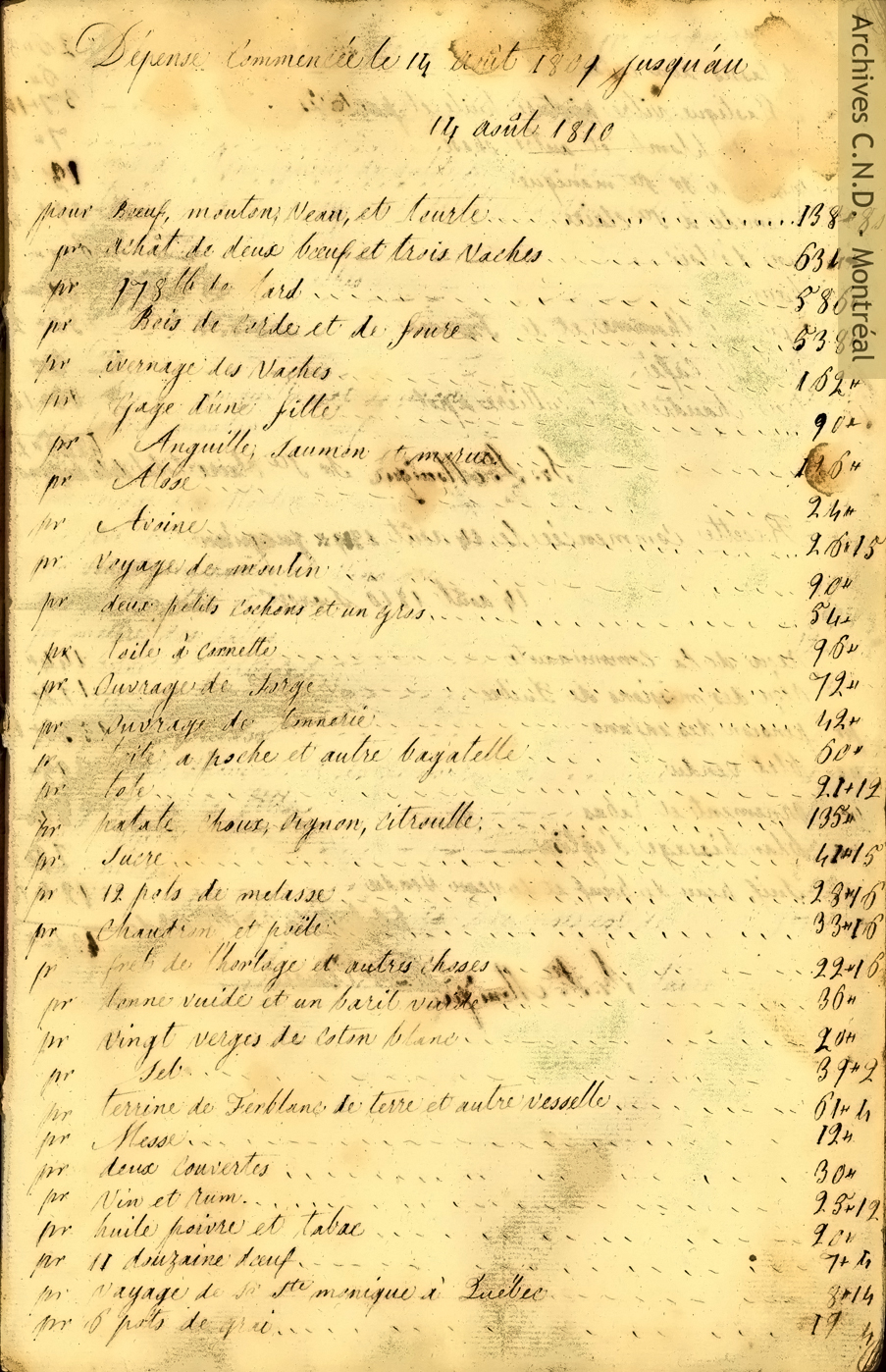 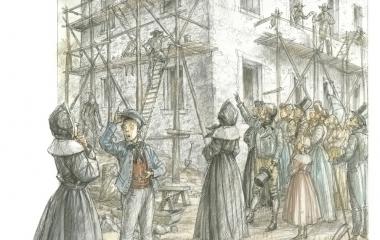 The Sisters are welcomed to a new mission 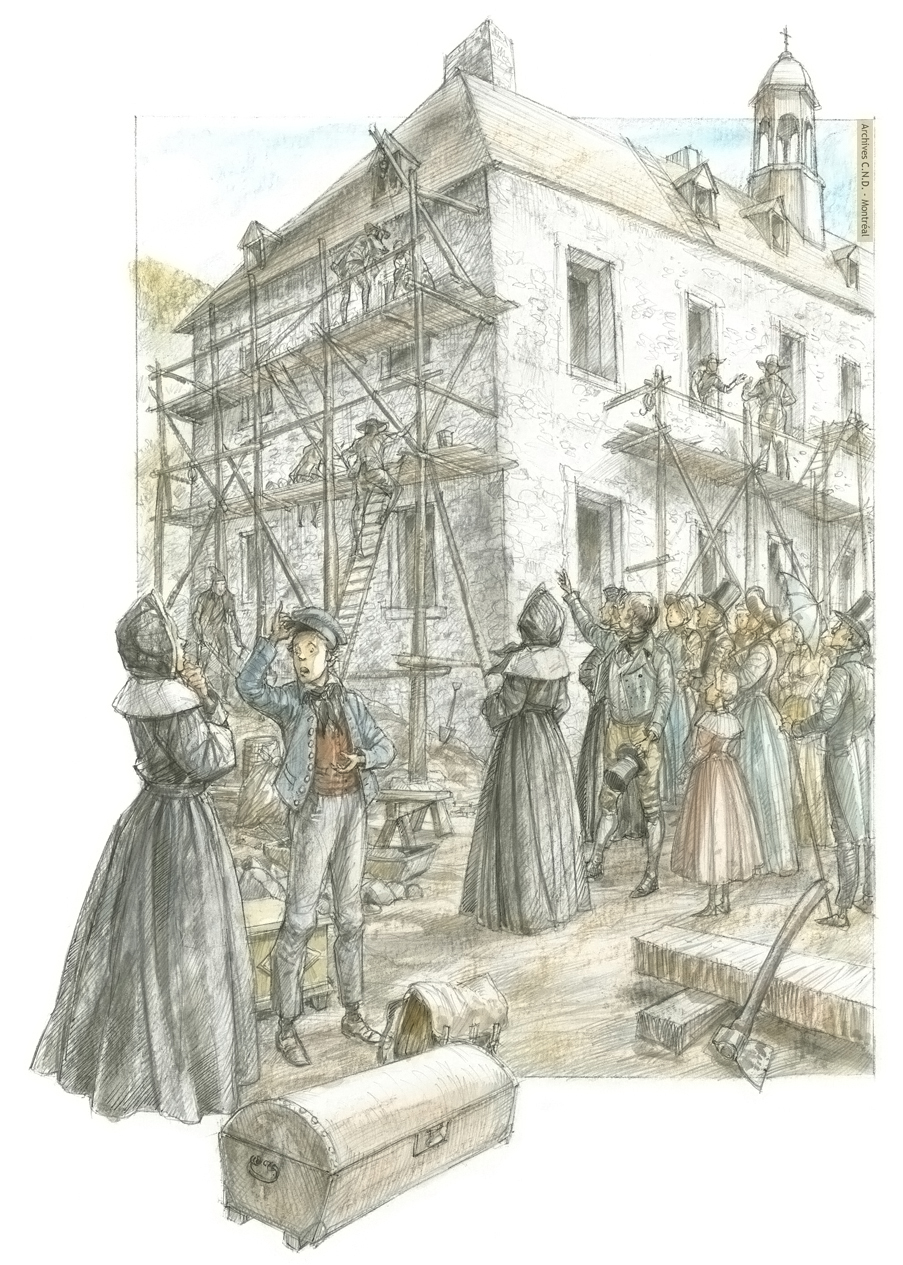 The Sisters are welcomed to a new mission, Sainte-Marie-de-Beauce, Quebec, 1823. Illustration : Francis Back.

In the 19th century more missions opened in Quebec. Pastors asked the Congrégation de Notre-Dame to provide teachers for their parishes. Often, because of a lack of available Sisters, many requests were refused and some parishes had to wait for several years. However, Msgr. Plessis, Bishop of Québec and Pastor Villade, began the construction of a convent in Sainte-Marie-de-Beauce. The parishioners participated in the financing and planning of the building which, when the Sisters of the Congregation arrived in 1823, was still not completed. But they achieved what they had been working toward: the daughters of Marguerite Bourgeoys took charge of the education of the children of Sainte-Marie-de-Beauce. 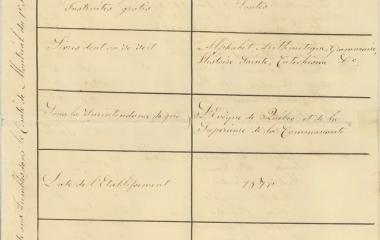 Pages taken from the record of accounts of the boarders 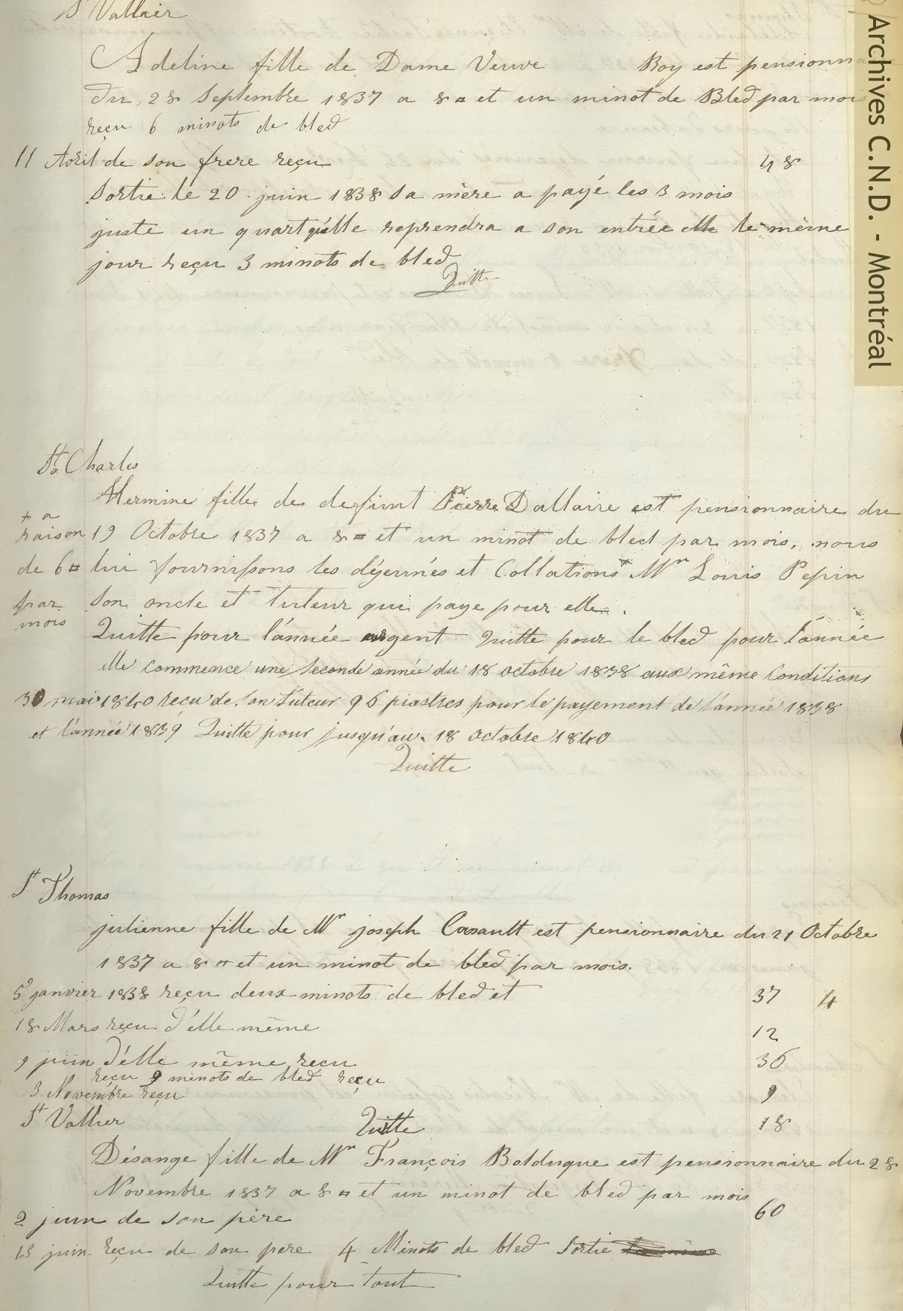 These pages from the record of boarder accounts show that students began classes at different times of the year: Françoise Garand entered the conventon September 28, Madeleine Colin, on February 1 and the two young Langlois sisters on August 22. At that time school calendars did not exist. Teaching was more personalized and the teachers moved around to meet the needs of small groups. Instruction began with learning how to read, which was closely connected to religion. Some children stayed in school only a few months, the time it took to receive their First Communion, learn how to spell, read prayers and write their names. Those who stayed longer, like the Langlois sisters, further developed their reading, writing and arithmetic skills as well as their ability to perform small manual tasks.