Unique Foundation in the New World

Ville-Marie, the tiny settlement from which would grow the city of Montreal, had its origins in the desire to communicate the Christian faith to the Native Peoples of New France. The Jesuits began their missionary work in what is now Canada in 1611; their written reports on that work soon began to circulate in France and to awaken a response especially among some of their former students. Among these was Jérôme Le Royer de la Dauversière, a layman, husband and father, who had already founded a community of nursing nuns in his native La Flèche and Jean-Jacques Olier de Verneuil, a young secularpriest. They gathered with them a group that included lay people and clerics, men and women, single and married, nobles, middle-class and working people to form the Société de Notre-Dame de Montréal. They believed that, as their ancestors had received the Christian faith through missionaries who had come to northern Europe in the early Christian centuries, so it was now their responsibility to share that faith with the Native Peoples of America. To realize this, they planned and financed the establishment of a settlement that would itself be a model of a Christian community. The site chosen for this settlement was the island of Montreal at the junction of the Ottawa and Saint Lawrence rivers. Colonists were recruited and two leaders were appointed to make the foundation, Paul de Chomedey de Maisonneuve, a young soldier, and Jeanne Mance, who became bursar of the expedition and was entrusted with the task of founding a hospital. Despite many difficulties, that foundation was made in mid-May 1642 by a group of about forty persons. 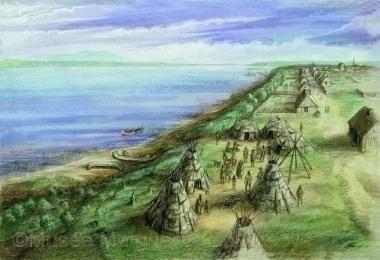 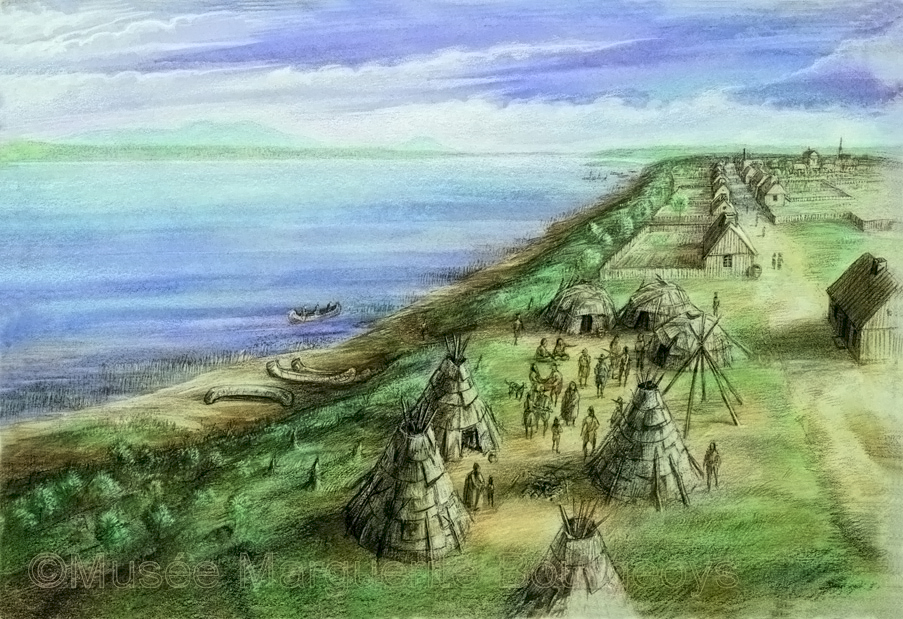 When the first colonists from France settled in Montréal in 1642, Hochelaga, the Iroquois village which Jacques Cartier visited in 1535, no longer existed. During the first months following their arrival, the settlers built a fort surrounded by a stake palisade. Houses multiplied through the years. Several Amerindian nations set up camp on the island and their members traded furs from the Great Lakes with the new settlers.

A Touch of Grace

In her later years, Marguerite Bourgeoys always associated an event that permanently changed her life with the foundation of Montreal. Born in 1620 in Troyes, the ancient capital of the province of Champagne in France, Marguerite was the daughter of a master candle maker who operated his own shop and held a position in the Troyes mint; her mother’s family was engaged in the textile trade. As was often the case for women in the class to which she was born, she learned not only the manual skills of the family trades but also the business skills of reading, writing, accounting and economic planning. Marguerite was gifted with both intelligence and a joyful and attractive disposition. In 1640 she experienced what she called a “touch” of grace that inspired her with the desire to give herself to God. When her attempts to enter a contemplative religious communitywere unsuccessful, she joined and eventually became leader of a group of young lay women who made it possible for the cloistered Congrégation de Notre-Dame of Troyes to reach out to the poor of that city. Marguerite began her work of education among the poor and dispossessed, trained by a group of women using the most advanced techniques of the time for the education of the ordinary people. Pierre Fourier who, with Alix Le Clerc, had founded the Congrégation de Notre-Dame, was a great innovator. His experience among the poor in his first parish had led him to the conclusion that almsgiving was not enough, that education was the means to allow the poor to improve their condition and to live with honour and self-respect. He gave himself to the invention of a pedagogy that would make that possible. The Congregation sister who directed the group in which Marguerite worked during these years was Louise de Chomedey, sister of Paul de Chomedey de Maisonneuve. Through her, Marguerite received the invitation to go and open a school in Montreal in 1653. 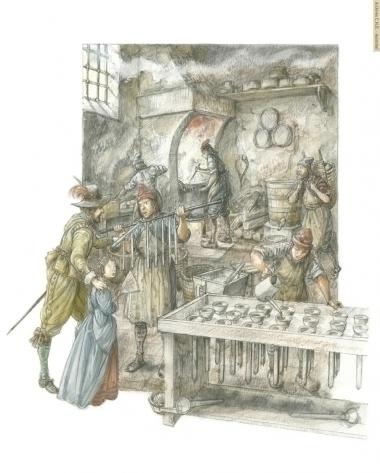 Marguerite Bourgeoys and her father at the candle workshop 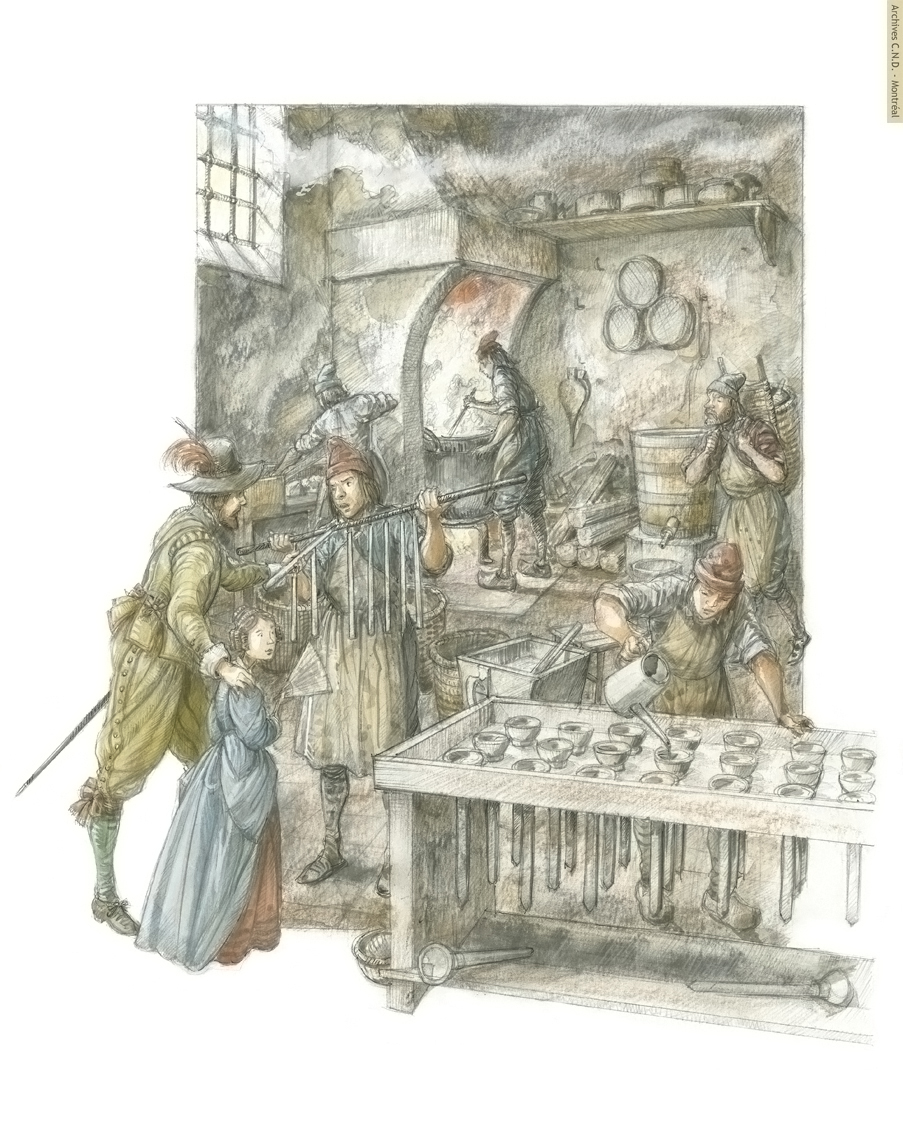 Marguerite Bourgeoys and her father at the candle workshop, Troyes, Grand Est, France, [163-]. Illustration : Francis Back.

Through both her mother, Guillemette Garnier, and her father, Abraham Bourgeoys, a master candle-maker and merchant of tallow candles, Marguerite belonged to the 17th-century French bourgeoisie. The candle store and workshop where the apprentices worked were within the family residence, making space limited for the Bourgeoys family of at least thirteen children. Abraham Bourgeoys was also a coiner in the mint, a mostly honorary position since royal currency in Troyes was produced intermittently. In this family environment, Marguerite developed her practical intelligence, her business sense and her leadership qualities

The 17th century saw the development of what is known as the French School of Spirituality, part of the movement of renewal associated with the Catholic Reformation. This spirituality has at its heart, the person of Jesus Christ whose life and missioncontinues in Christians through the presence of the Holy Spirit. The great feast of this spirituality is Pentecost, the day in which the Church came into being through the action of the Spirit of the Risen Christ. The sense of the missionary dimension of the Christian calling is apparent in the stated motivation of the Société de Notre-Dame de Montréal and in the writings of Marguerite Bourgeoys. The French Church of this period saw education as playing a huge role in this missionary activity from the education and formation of priests to the education by both word and example of the least members of society. The desire to work among the more disadvantaged in society led to a great desire among religious women to establish communities that would not be cloistered but would live close to and share the life of those they hoped to serve. Among the most important figures of the French School was Jean-Jacques Olier, founding member of the Société de Notre-Dame de Montréal and also of an association of priests known now as the Priests of Saint Sulpice. This group eventually assumed responsibility for Montreal and their support for the work of Marguerite Bourgeoys would become an important factor in its growth and survival. 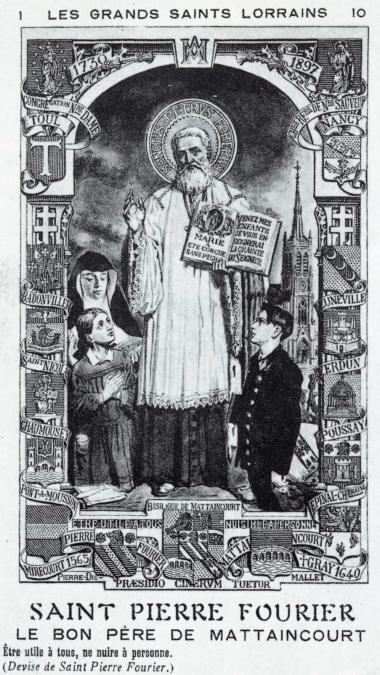 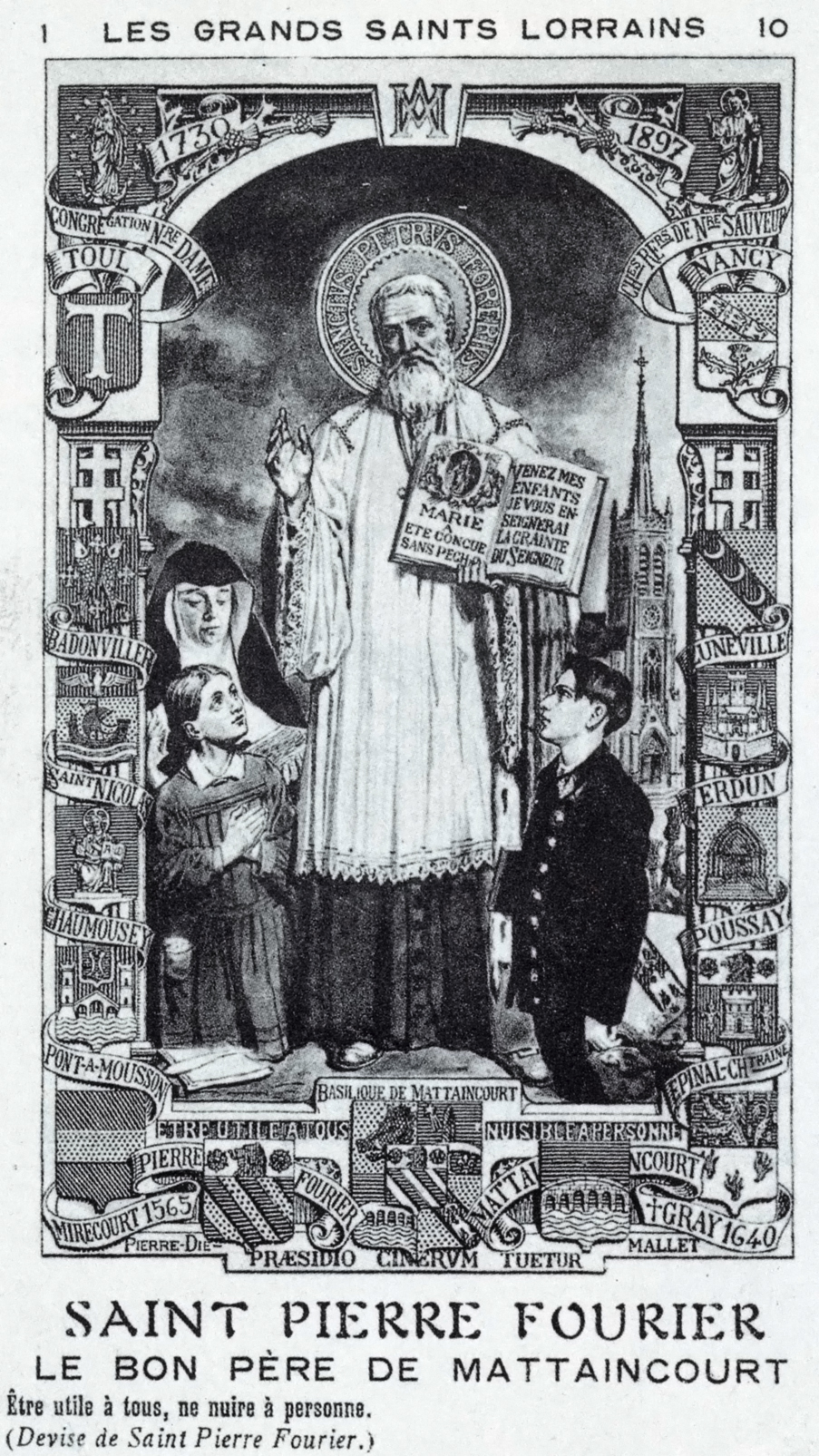 Born in 1565 in Mirecourt (France), Pierre Fourier studied at the renowned university of Pont-à-Mousson, which had been recently founded by the Jesuits. During a time of many upheavals, he undertook the reform of education and the improvement of the social condition of the masses, including providing education to girls and young women. In 1597, with Alix Le Clerc, he founded the Congrégation Notre-Dame and opened the first free school for girls in Poussay the following year. As pioneers in the field of education, Fourier and Le Clerc organized school activities and developed a programme adapted to the times which emphasized reading, writing, small manual tasks and Christian religion. 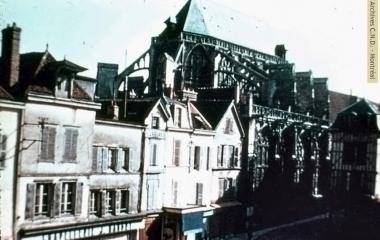 House where Marguerite Bourgeoys was born 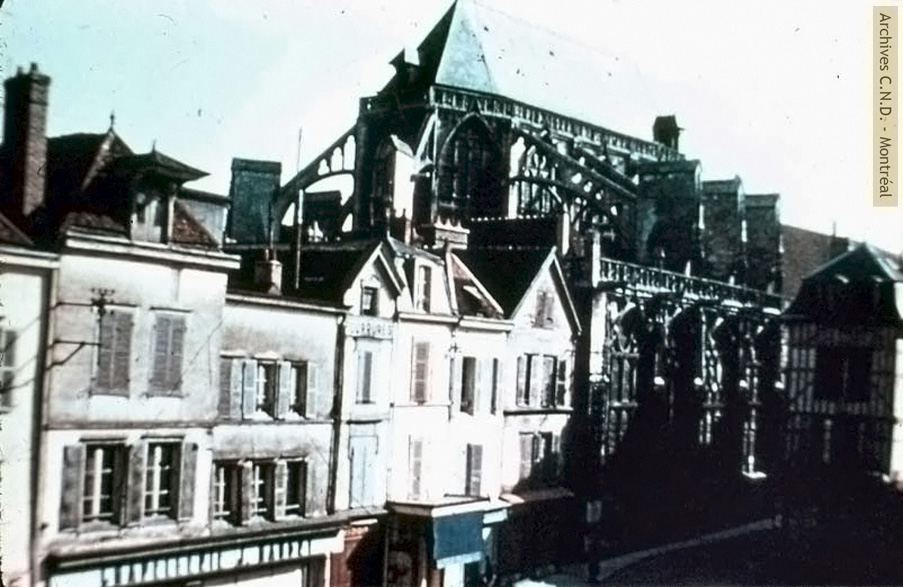 Marguerite Bourgeoys and her family lived at 19 bis de la Grande Rue on Belle Croix Square (today Alexandre-Israël Square) in the Saint-Jean district in Troyes, in Champagne (France). The house which saw her grow was probably built in the 13th century. It was demolished in 1977. 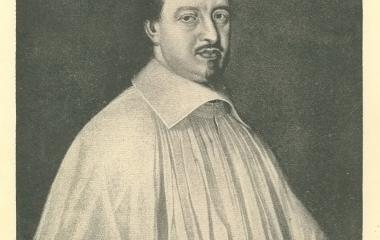 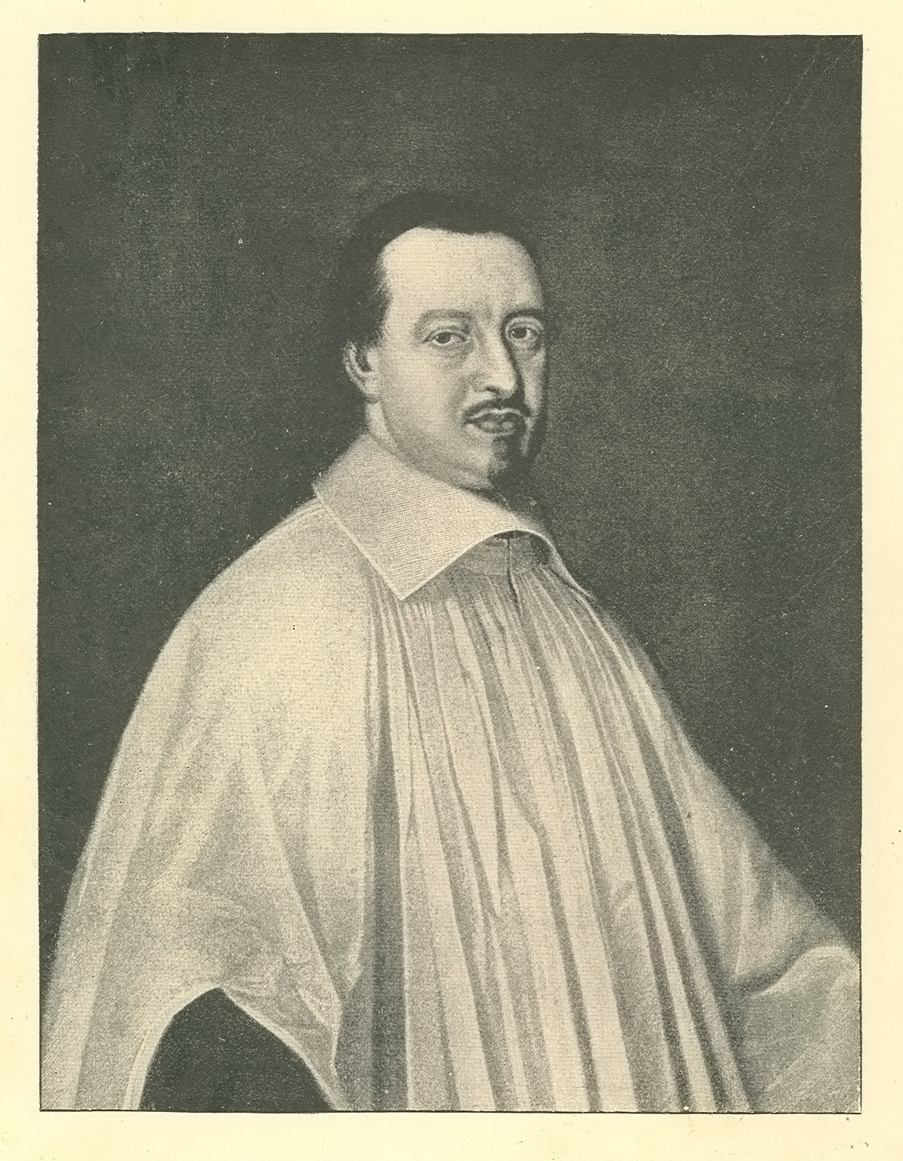 Jean-Jacques Olier de Verneuil was born in 1608 in Paris (France). Founding father of the Order of the Sulpicians, he became interested in the missions in New France after meeting Jérôme Le Royer de la Dauversière in 1639. With him and Pierre Chevrier, Baron de Fancamp, he co-founded the Société de Notre-Dame de Montréal pour la conversion des Sauvages de la Nouvelle-France (Society of Notre-Dame of Montreal for the Conversion of Savages in New France). In 1642, Olier selected Paul de Chomedey de Maisonneuve to found Ville-Marie (Montreal). Just before his death in 1657, he sent four Sulpicians to Ville-Marie, Gabriel de Thubières de Levy de Queylus, Dominique Galinier, Gabriel Souart and Antoine dAllet, who succeeded the Jesuits in the fledgling colony. 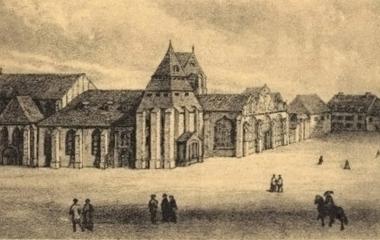 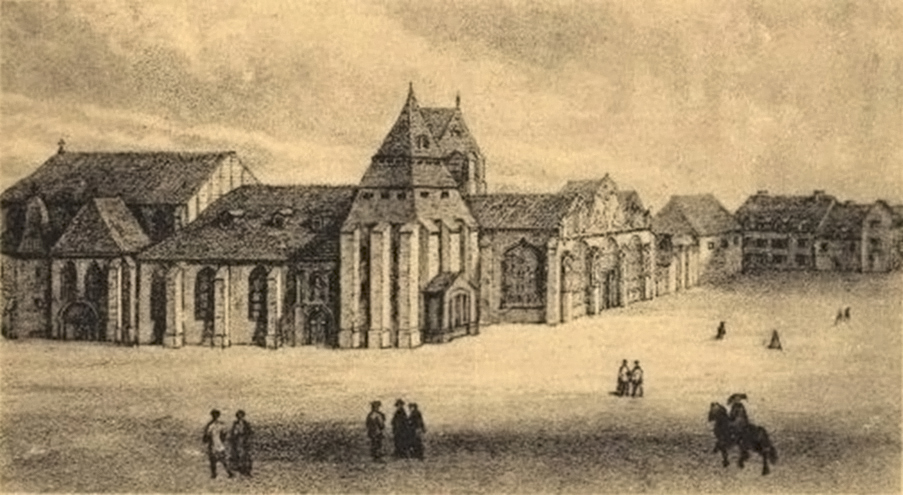 In 1640, during the procession of Rosary Sunday, Marguerite Bourgeoys passed before the portal of the abbey of Notre-Dame-aux-Nonnains, and looked up at the stone image of the Virgin above the door. She felt so touched and so changed that I no longer knew myself. This marked a turning point in her personal life and led to the foundation of the Congrégation de Notre-Dame. 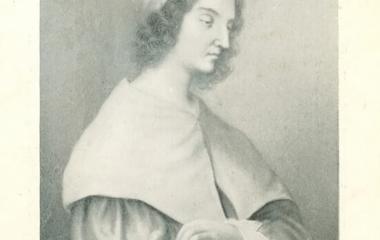 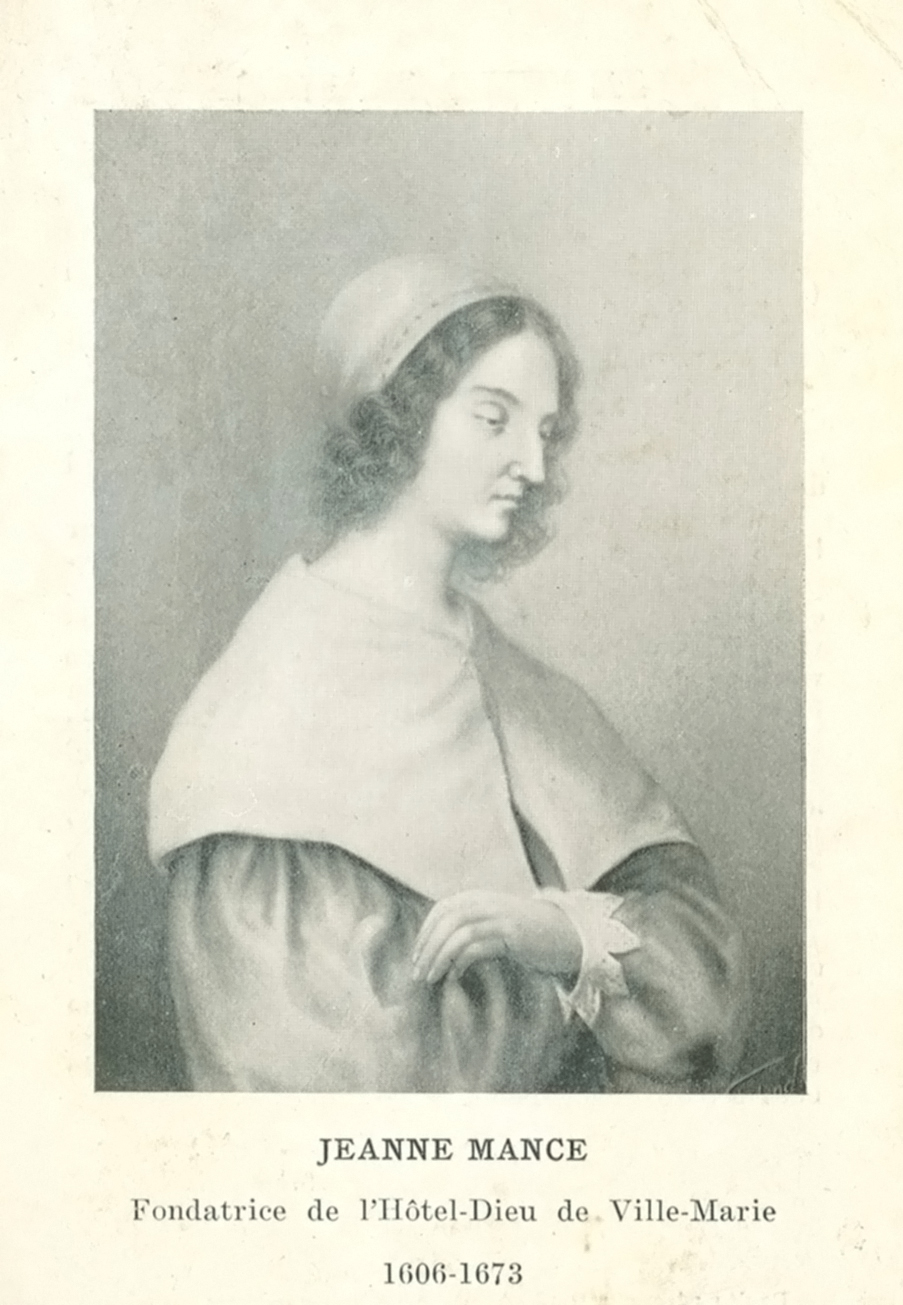 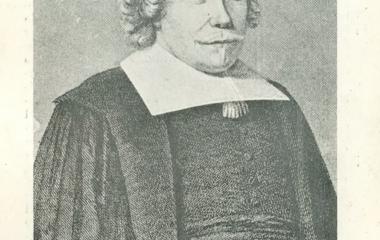 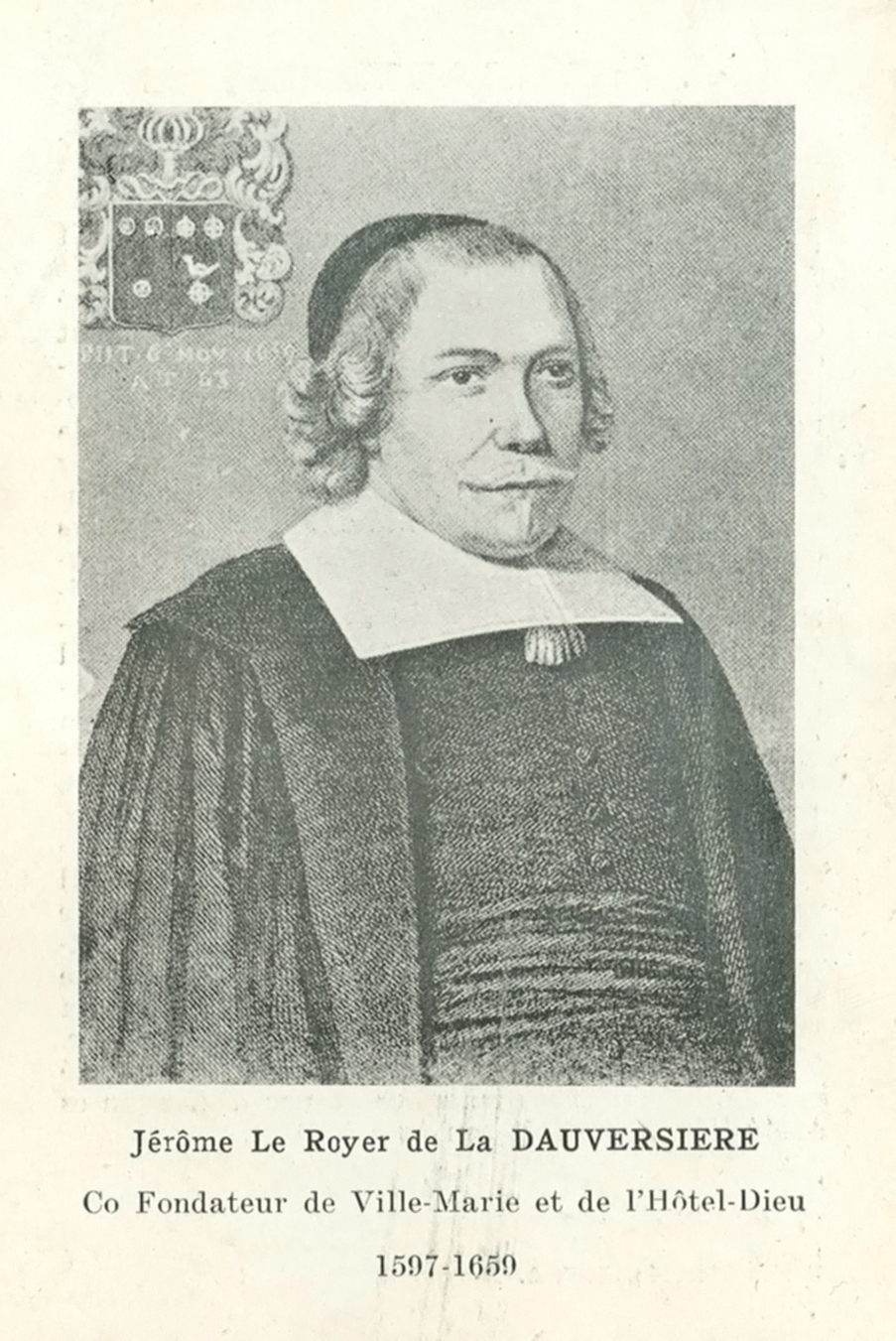 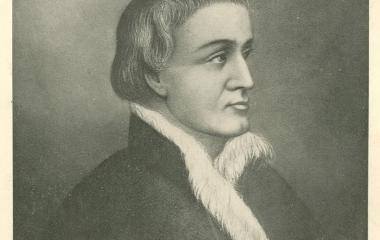 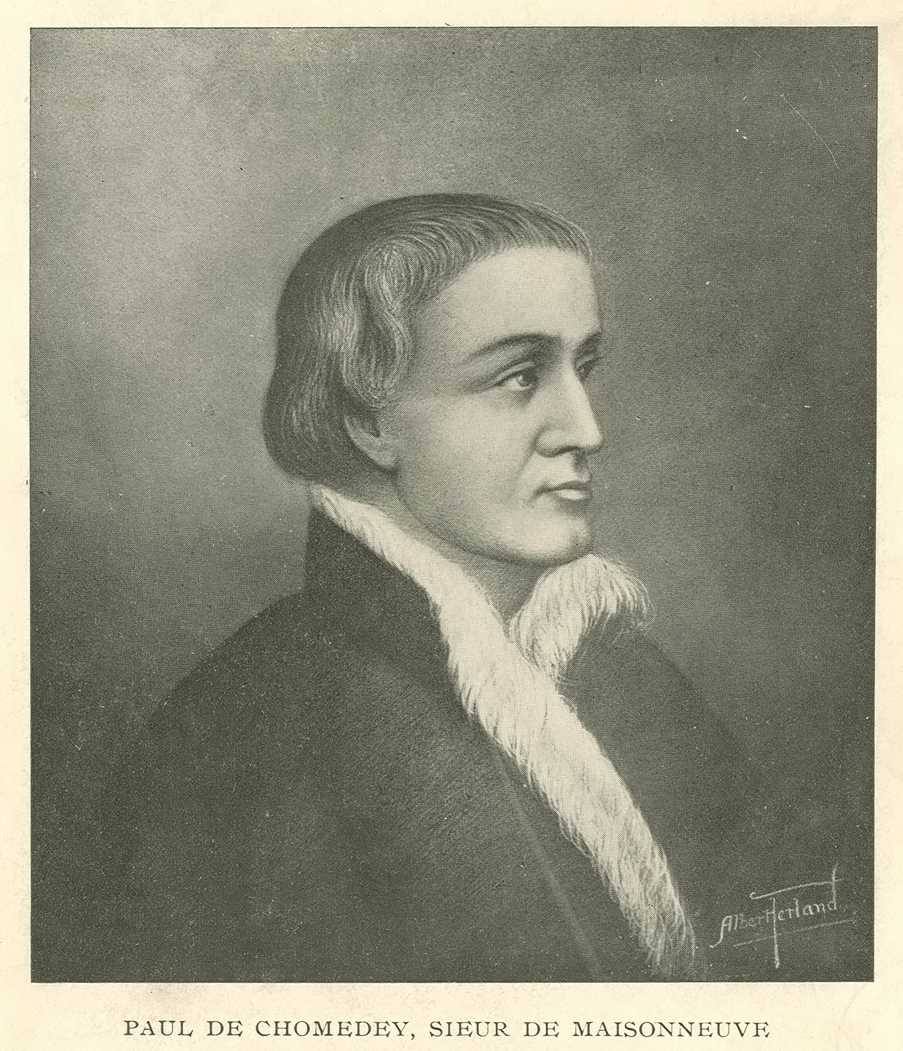 Paul de Chomedey de Maisonneuve was born on February 15, 1612 in Neuville-sur-Vanne (France). Gentleman, officer, member of the Société Notre-Dame de Montréal, he founded Ville-Marie in 1642 and was the first governor of the island of Montreal. Following the advice of his sister, Louise de Chomedey, Directress of the extern congregation of the Congrégation Notre-Dame à Troyes, he recruited Marguerite Bourgeoys to teach the children of the new colony. De Maisonneuve fully supported this first teacher of Ville-Marie and her community: the Congrégation de Notre-Dame. Recalled in France en 1665, he retired in Paris where he died in 1676.