Sainte-Catherine Convent was officially established in 1861 by the Congrégation de Notre-Dame as a result of many years of involvement in the Montreal area known as Au Pied-du-Courant or Faubourg à m’lasse (today Sainte-Marie district). Indeed, the sisters had been present there since 1853. At the request of Father Augustin Campion from Saint-Sulpice Seminary, sisters commuted from the mother house on Saint-Jean-Baptiste Street to provide education to the youth of the area. After eight years, they finally rented a small wooden house on Sainte-Marie Street (today Notre-Dame Street). The modest school had four rooms: three classrooms; one room served to accommodate the sisters. The building was not weatherproofed and did not provide protection against the elements and Montreal’s cold winters. Nevertheless, in 1861, one hundred seventy-five girls were received. The founding sisters were Sister Sainte-Domitille (Marie-Sophie-Hombéline Larochelle), the director, Sister Saint-Charles (Esther Lemire) and Sister Sainte-Henriette (Marie-Darie-Aurélie Lemire Marsolais). Because of difficult conditions in the school, there were frequent changes in personnel. In 1865, after having relocated twice, the sisters moved to 18 Fullum Street in an allegedly haunted house. The institution was named Sainte-Catherine School. Life was hard there and the school was often targeted by thieves who stole the teaching sisters’ supplies. In 1867, while Saint-Vincent-de-Paul Parish was being built, the Sulpicians withdrew from the area. Some years later, the responsibility for Sainte-Catherine School was given to the Montreal Catholic School Commission. Finally in 1881, Father Moyse Lavallée, pastor of the parish, built Sainte-Catherine Convent on Sainte-Catherine Street East. The large three-storey stone building received only girls. The school was divided into two sections: Académie Sainte-Catherine for day students; the boarding facility which received thirty-eight boarders when it opened. In 1889, the school already numbered some one hundred boarders and four hundred day students.

In 1894, due to lack of space, an annex was built. This addition enabled the sisters to receive six hundred sixty students. In 1906, a second annex was built on Dufresne Street. Eleven additional classrooms were made available for the students. The sisters taught French, English, music, and sewing. Eight hundred fifty-seven students from grade 1 to grade 8 were enrolled in Sainte-Catherine Convent’s eighteen classes. In 1924, the Notre-Dame-de-l’Immaculée-Conception Alumnae Association was officially formed with one hundred seventy-five former students. In 1961, important celebrations were organized to mark the 100th anniversary of the convent’s foundation. During the two-day festivities, guests enjoyed a grand banquet and attended a Mass presided by Cardinal Paul-Émile Léger. That same year, the School Commission decided to close the boarding school in order to build a classical high-school. When the changes were made, Sainte-Catherine School numbered one thousand eight boys and girls. The teaching staff included eleven sisters. In 1974, the School Commission permanently closed the school. The students and the sisters were transferred to the new Champlain School. This time, the convent took the name Sainte-Catherine Residence. In 1975, the Congrégation de Notre-Dame bought back the land and the convent from Saint-Vincent-de-Paul Parish. Not at all discouraged by this closing of the school, the sisters implemented a multitude of projects in order to continue their mission of education in the area: Some taught in other schools; one sister worked with abused women and children; another held meetings for couples in difficulty; adult education was offered; the outreach project called La Relance was created in order to guide and assist neighbourhood parents in the education of their children. In 2004, the sisters permanently left Sainte-Catherine Street. Several of them moved into Catherine-Crolo Residence on Bagot Street in the Rosemont area. The building now serves as a seniors’ residence. 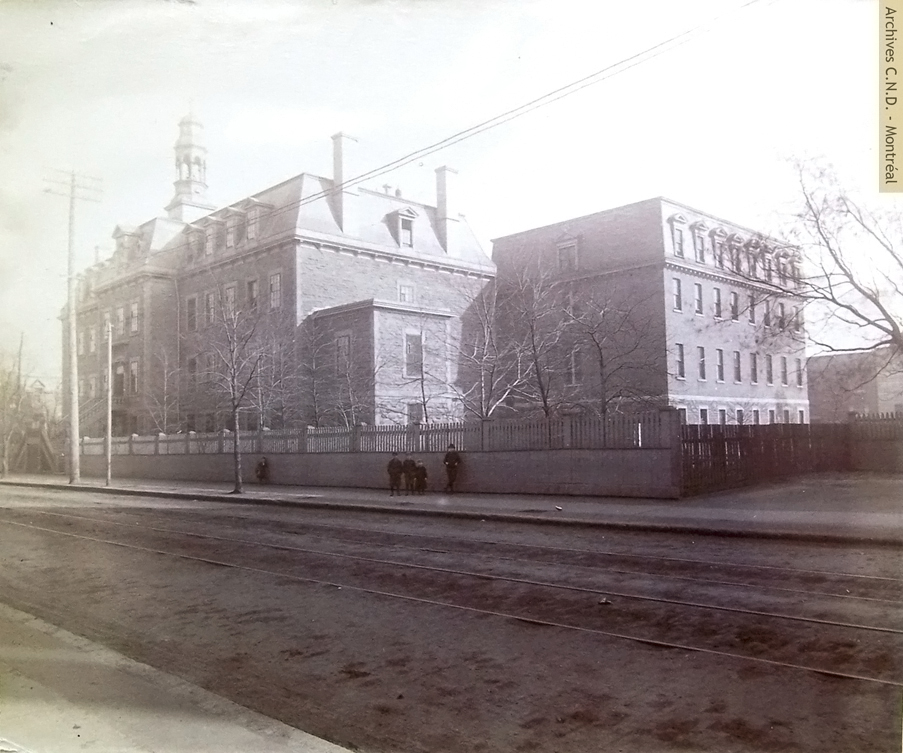