In August 1955, the direction of the future University of Ottawa School of Domestic Sciencewas entrusted to Sister Sainte-Marguerite-des-Vertus (Marguerite Ouellet), then teacher at the School of Domestic Science in Quebec City. With Sister Sainte-Thérèse-de-la-Foi (Marcelle Olivier), Director of Laval University School of Domestic Science, she developed a curriculum that met the demands necessary to obtain an Undergraduate Degree in Domestic Science as well as the general knowledge required for this level of higher education. Oblate Father René Lavigne, Dean of the Faculty of Arts at the University of Ottawa helped revise the curriculum. The school was officially founded on February 29, 1956. It opened on September 18, 1956 in the renovated quarters of an older Faculty of Arts building on Waller Street, which also served as the Sisters’ residence. The staff was made up of six Sisters and five lay teachers. The school received eighteen regular full-time students and seventeen students of various categories, including nine Sisters. The four-year courses were given in three different pavilions. Theoretical and practical instruction was provided. The curriculum included such courses as The Rational Kitchen, Menu Planning, Nutritional Chemistry, Biology, Bacteriology, Nutrition, Cutting and Sewing, History of Clothing, Economics, Physics, Mathematics, French, English, Religion, and Philosophy.

In 1959, the school added two new programmes: an Undergraduate Degree in Domestic Science and a Bachelor of Arts Degree with a minor in Domestic Science. In 1967, the school became the Nutrition and Domestic Science Department. Following these changes, the Sisters moved to a new residence on Chapel Street, named maison Jeanne-Brulé. From 1975 to 1977, two Sisters still taught in this Department and lived in communauté Marius-Barbeau. In 1979, the Department was integrated with the Department of Biochemistry; Sisters are no longer part of the teaching staff. In 1994, the residence moved on East Laurier Street and closed in 1996. 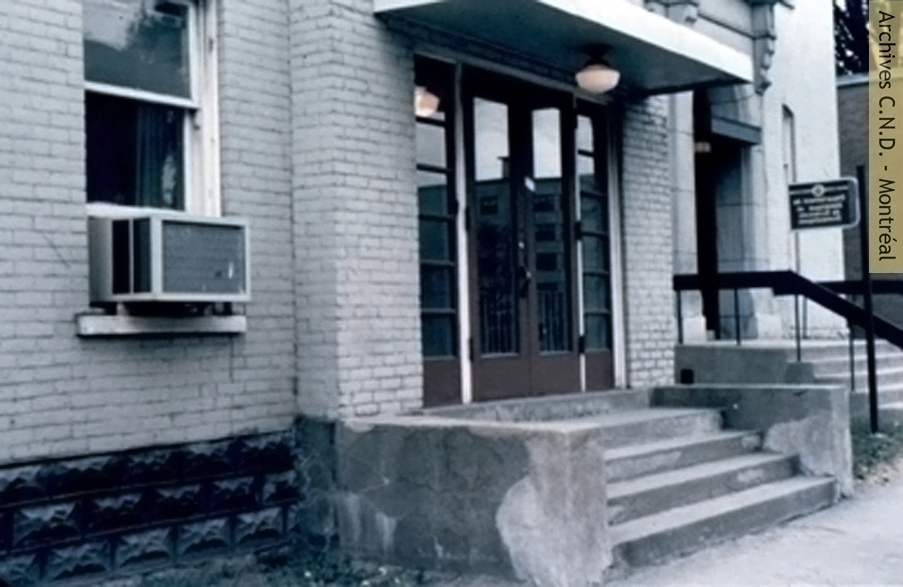 Dernière adresse : At the corner of Waller Street and Séraphin-Marion Street

At the corner of Waller Street and Séraphin-Marion Street