On March 25, 1902, Most Reverend Paul Larocque, Bishop of Sherbrooke, assigned Father Joseph-Siméon Larocque to the parish of Bromptonville. Upon his arrival he wished to establish a parish school. Because there already were, at that time, three Congrégation de Notre-Dame schools in the area (in Richmond, Windsor and Sherbrooke), the Congregation was selected to establish the Bromptonville Boarding School. On September 2, 1903, five sisters, among them Sister Sainte-Aimée-de-Marie (Marie-Anne-Agnès Bernardin), Sister Sainte-Victorine (Marie-Rose-de-Lima Sheedy) and Sister Sainte-Marie-de-Massabielle (Mary Kurrle) opened the Brompton mission. On September 10, two hundred students, both boys and girls, registered at the school. Two lay teachers joined the sisters to provide education to the young girls. The students were divided into three classes and a class was added for the English-speaking students. On September 15, the school received its first forty-seven boarders. In September 1904, the boarding school was named Marie-Immaculée. That same year, various associations were organized: Société des Enfant-Jésus, Société des Saints-Anges-Gardiens, Société des Enfants de Marie and Cadets du Sacré-Cœur.

In September 1936, the boarders could no longer be received since the increased number of students required that all rooms be converted into classrooms. The boarding school thus officially became Marie-Immaculée School. In the spring of 1948, the Saint-François River overflowed and flooded the town of Bromptonville. Over thirty houses were destroyed and some one hundred people were left homeless. The school, which had been built on the top of a hill, was spared. The sisters therefore sheltered several families while the village was being rebuilt. On September 25, 1949, about four hundred former students gathered for the first meeting of the Alumnae Association, Notre-Dame-de-Beau-Voir. In December 1952, an annex was built next to the main building in order for the school to be able to receive an ever-increasing number of students from the now booming town. A contract was signed for the sale of the convent and the school property to the Brompton School Board, which became the owner. The sisters permanently left the school in June 1967. 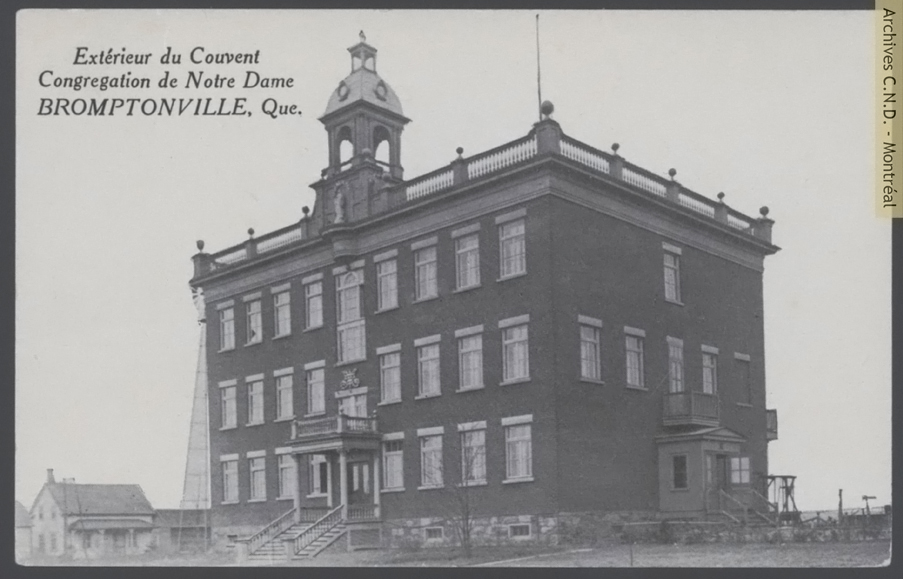