Notre Dame Residence was established following the relocation, in 1965, of parts of Notre Dame Convent in Ottawa. The institution left the outdated buildings on Gloucester Street and moved to the new Campanile Campus on Heron Road, in the Alta Vista district. The school complex, designed by Murray & Murray, architects and urban planners, was built in collaboration with the Ottawa Separate School Board. It welcomed many organizations and services. One building was reserved for Notre Dame High School, for the education of English speaking girls, grades 9 to 13. Students in grades 9 and 10 were administered by the School Board while those in grades 11, 12 and 13 were governed by the rules of private instruction. The Anglophone novitiate, which was formerly housed in the Mother House, was moved to the campus and was directed by Mother Saint-Maurice-du-Sauveur (Mary Farrell). There were also the offices of the Provincialate, Marguerita Hall Residence, which welcomed student boarders and the Sisters’ residence. One of the building was reserved for the School Board. The campus included a cafeteria, a gymnasium, an auditorium and a chapel. As of 1967, Saint Patrick’s College High School, governed by the Oblates of Mary Immaculate, established itself on campus. The official opening of the Campanile Campus took place on June 4, 1967. It was situated beside Queen of the Angels Elementary School, which had been annexed to it since 1960. The Sisters of the Congregation were active in all these institutions, in addition to working in Saint Theresa and Saint Patrick’s schools, and in other annexes, as required.

In 1968, the celebration commemorating the one hundred years of the community’s in Ottawa took place. At the beginning of the 1970’s, many changes occurred in the School Board’s school system. These changes also impacted on the schools situated on the campus. The complex closed in 1973 and the property was sold to the Government of Canada. Until 1974, the Sisters rented a pavilion while they waited to receive their new missions or to transfer to other residences in the area. Some moved to Visitation House on Bronson Drive or in an apartment. Along with the offices of the Provincialate, most of the Sisters moved to the residence on Baycrest Drive, formerly occupied by the Francophone community living in Ottawa. A wing was added to this building in 1975 to accommodate the offices of the Provincialate. The Sisters continued to teach and work in pastoral and spiritual ministries. They also welcomed boarders in the residence, which was now a multifunctional centre. Between 1981 and 1983, part of the local community’s efforts focused administering and operating the Centre for Spiritual Growth. The organization then moved on Chapel Street. In 1983, Sister Louise Dunn and Ms. Alexa Smith, consultant specializing in addiction, established Serenity Renewal for Families. This organization, among the first of its kind in Canada, offered workshops and support to people with problems of addiction and to their families. It was incorporated as a non-profit organization in 1987 and became the building’s raison d’être in 1989. The sisters left the Residence in 2009. 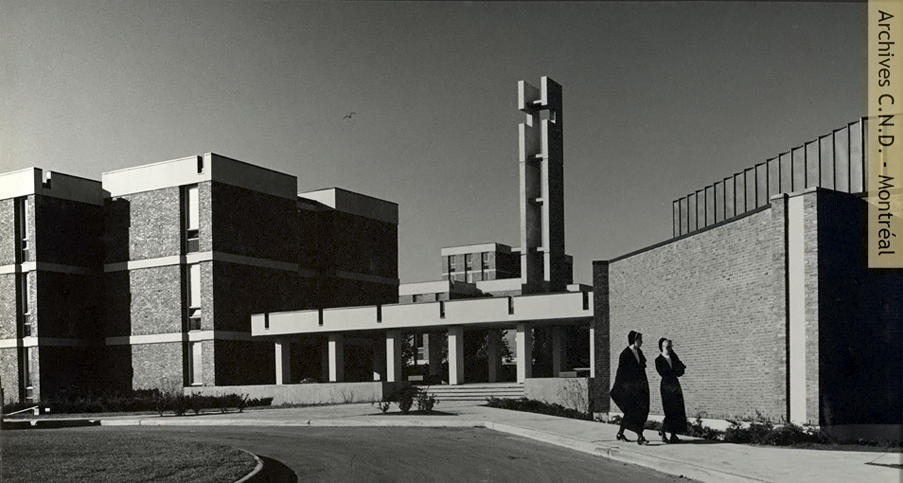