Saint-Antonin Elementary School, previously named Saint-Dominique School, was founded in 1915 and was built by the Notre-Dame-de-Grâce School Commission. It had fourteen classrooms, a reception hall (deemed unique in Montreal at the time) and two gymnasiums in the basement. The view of the Saint Joseph’s Oratory, on the side of Mount Royal, was especially beautiful. During the first years, both Saint-Dominique School and Notre-Dame-de-Grâce School were under the same direction; the person responsible was Sister Saint-Thaddée (Marie-Victoria Côté). When it opened on September 6, 1915, seventy-four students were under her supervision; she was assisted by Sister Saint-Siméon (Marie-Eveline-Rachel Therrien). From 1915 to 1930, the student population was not very large; it averaged about fifty students. The large school was expensive to maintain and heat for such a small number of students. When the districts merged in 1917, the Montreal School Commission nicknamed it the “White Elephant” because of the large sum of money it needed to maintain it.

The Congrégation de Notre-Dame sisters taught French-speaking girls, while lay teachers taught the boys and English-speaking students. The sisters commuted daily from their residence to the school which was somewhat problematic. They even considered selling it to another religious institution, but the Congregation reconsidered. In 1926, the situation improved when the new Saint-Dominique mission was created. It attracted new parishioners and, consequently, new students for the school. Three years later, the mission became Saint-Dominique Parish and the school was renamed Saint-Antonin. By 1931, the number of students had increased to two hundred forty-four and a grade eight class for girls was opened. After years of commuting morning and night from their residence, the sisters finally moved to the school’s available premises. In addition to providing the regular academic program, they offered drawing lessons, manual training and history and geography classes. Students could also participate in religious groups, such as, Eucharistic Crusade, Children of Mary, the Anges gardiens and theAspirantes. In June 1959, the sisters left Saint-Antonin School, with regret. After having been under the direction of the sisters for over forty-four years, the school was passed on to lay personnel. The sisters were reassigned to the new Saint-Luc High School in Montreal. 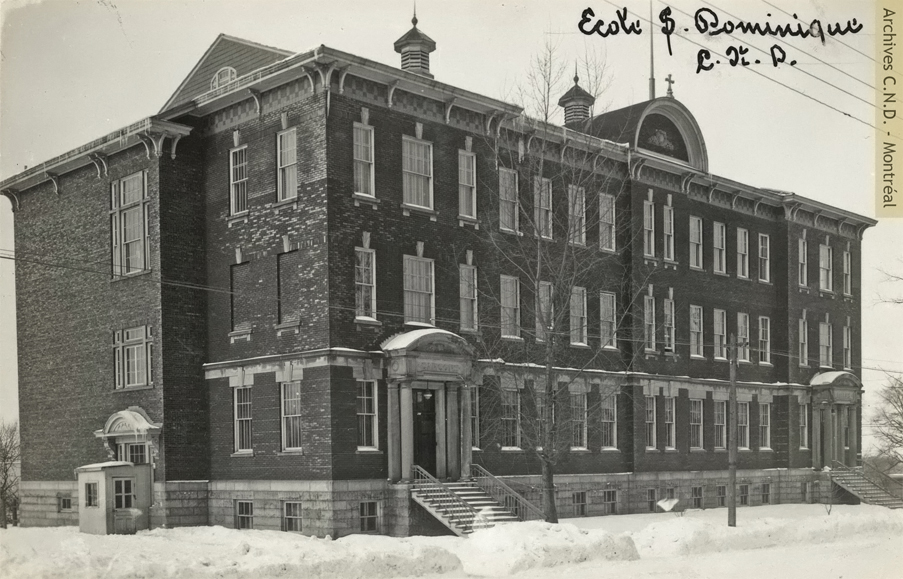