Saint-Malo Parish was established in 1899 when Saint-Sauveur de Québec Parish was divided. Immediately after Father Joseph-Herménégilde Bouffard’s nomination to the parish in 1900, he approached the Sisters of the Congrégation de Notre-Dame and asked if they could open a school for girls. In view of this, the Quebec Catholic School Commission purchased a piece of land on April 12, 1901 and the new building was blessed on August 18, 1902. The founding Superior, Sister Sainte-Concorde (Marie-Justine Brien-Desrochers) and her two companions, Sisters Sainte-Edwin (Mary McInnis) and Saint-Gérard (Clarisse-Anna Cournoyer), moved there the very next day. When it opened, Saint-Malo convent-school received about two hundred and sixty students divided into six classes. In 1914, thanks to the financial support provided by the School Commission, Domestic Sciences were added to the academic curriculum. The students were introduced to sewing, cooking, laundering, ironing and housekeeping. In 1918, classrooms were opened in various locations in the area in order to receive all the young women who had registered. Because the lack of space had become a serious problem, the School Commission built in 1924 a three-story annex with twenty-four classrooms and a chapel which was on the ground floor. It was situated at 286 Marie-de-l'Incarnation Street. The older building was renovated and served as the Sisters’ residence. In 1929, Notre-Dame-Médiatrice Alumni Association was established to bring together all the students who had attended the convent-school. This association organized the institution’s Golden Jubilee celebrations which took place in 1953. In 1966, Saint-Malo convent-school became an elementary school. The residence welcomed Sisters who taught in other schools, for example, Jacques-Cartier School, Saint-Thomas-d'Aquin School and Marguerite-Bourgeoys High School. The Sisters’ residence closed in 1976 because the Commissioners, the building’s owners, estimated that the rent was too high. The Sisters moved to other residences and only lay teachers taught in the school. 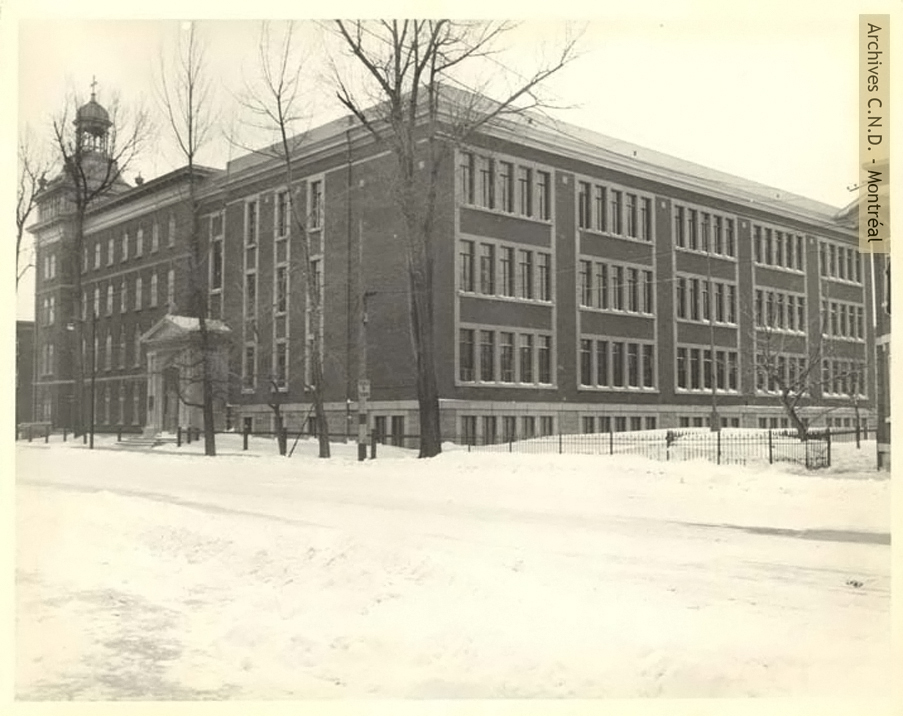 Dernière adresse : At the corner of rues Marie-de-l'Incarnation and Raoul-Jobin