As early as 1670, the sisters were present in Lachine by way of their travelling missions. They journeyed in pairs outside Ville-Marie to develop religious and educational services for the colonist families. In 1676, Bishop de Laval erected the small community into a parish. In the 1680s, the sisters were invited to teach and live in the wood presbytery situated inside the fort. The sisters and their students were thus spared the Iroquois attack of August 5, 1689 (known as the “Lachine massacre”). They found refuge in Montreal while they waited for the situation in the settlement to improve; they returned in 1692. In 1707, Sulpician Father Pierre Rémy built a stone house for the sisters and their students. In 1714, he rewrote his will and testament in order to be able to bequeath the house and adjacent land to the sisters who were already the occupants. Hence, in 1726, when Father Rémy died, the sisters became the owners. However, some fifty years later, the convent was in ruin and the village in decline.

In 1784, the mission moved from Lachine to Pointe-Claire in order to meet the needs of a larger population of settlers. The founders were Sister Sainte-Marie (Marie-Julie Martel) and Sister Saint-Amable (Marie-Marguerite Couturier). The sisters temporarily lived in a house to the East of Sainte-Anne Street. In 1787, the construction of a first convent on Sainte-Mathilde Street was completed. The stone structure was 64 feet long by 54 feet wide. In the mid-19th century, the parish fabrique or governing committee wished to build a larger church. They proposed to the sisters an exchange of properties as the convent required important repairs. On June 8, 1866, the sisters ceded their house and land to the parish governing committee in exchange for a piece of land known as Pointe-du-Moulin. In 1868, The sisters moved into their newly-built and more spacious convent designed by Henri-Maurice Perreault. The convent was located at 1 Saint-Joachim Street. It was on the same lot as the windmill which had been built in 1708-1709 at the request of the Priests of Saint Sulpice. It is one of the oldest remaining vestiges of colonization on the banks of the island of Montreal. Over time, the windmill underwent several modifications and, in 1911, was adopted as the official emblem of the City of Pointe-Claire.

On May 22, 1900, fire damaged or destroyed more than twenty buildings on Saint-Joachim and Sainte-Anne Streets. The convent was spared but their outbuildings were destroyed. Between 1900 and 1902, as a sign of gratitude for the safeguard of the convent, Sister Sainte-Olive (Julie Girard) had a new “mission cross” erected in memory of the wooden cross which had been planted in 1784 by Mr. Pierre Sartelon, the Sulpician parish priest. In his time, he had erected the cross as a tribute to the first priests who went on mission to evangelize the Amerindians. Damaged many times, it was reinstalled or replaced in 1942, 1963 and 2002.

On March 20, 1930, Notre-Dame-du-Vieux-Moulin Alumnae Association was founded. In 1934, a statue of Saint Joseph, offered by former students on the 150th anniversary of the sisters’ arrival in Pointe-Claire, was installed at the convent’s entrance. On March 13, 1936, Action sociale féminine of Pointe-Claire was established; and many women attended the meetings held at the convent.

In July 1937, a stained-glass window representing Marguerite Bourgeoys was placed in the hall of the convent. In 1947, the ice breakup on Lake Saint-Louis caused considerable damage: it washed away a stone rampart which served to protect the shoreline. The structure was solidified with materials recuperated from what remained of Mont Sainte-Marie Boarding School, which had been destroyed by fire some years earlier. A grotto of Lourdes was erected that same year thanks to donations from the 1946-47 and 1947-48 graduating students. In the spring of 1966, the installation of windmill blades required that that the grotto be demolished. It was rebuilt northwest of the convent

Between 1961 and 1963, major renovations were undertaken to expand the convent: two perpendicular wings were added. Indeed, in 1962, the convent was renovated in order to fulfill its new mission as an assisted living facility. In September 1963, the sisters joined the population to celebrate the 250th anniversary of Saint-Joachim Parish. Former students participated in these grand celebrations. At the same time, a new school opened in the convent: Vieux-Moulin Secretarial School. In its first year, the school received twenty-eight students and remained open until 1967. The sisters in Pointe-Claire were often solicited for missionary ministries. They participated in such activities as Le Moulin Missionary Workroom, founded on January 5, 1965 by a number of former students under the direction of Mlle Camille Dagenais. Its purpose was to help the missions and the families of the parish in tangible ways. From 1971 to 1976, the sisters living in the convent were divided into two communities: Notre-Dame-du-Cénacle Residence (first floor) and Notre-Dame-du-Lac Residence (retirement home on the second floor). In 1976, the two communities were merged into Résidence de Pointe-Claire.

The sisters continued to teach in schools administered by the school commissions and were involved in various activities in the community of Pointe-Claire. For instance, some taught music, others offered courses to new Canadians, others still served as education assistants. They gave spirituality courses in the parish, taught catechism classes in schools until the 2000s and offered homework assistance until 2014. During this last year, the sisters departed from Pointe-Claire and the property returned to Saint-Joachim Parish. In 2015, in order to highlight the two hundred thirty years of presence of the Congrégation de Notre-Dame, the City of Pointe-Claire commissioned a commemorative art work. It was placed between the convent and the church and evokes the sisters’ ministry of education. 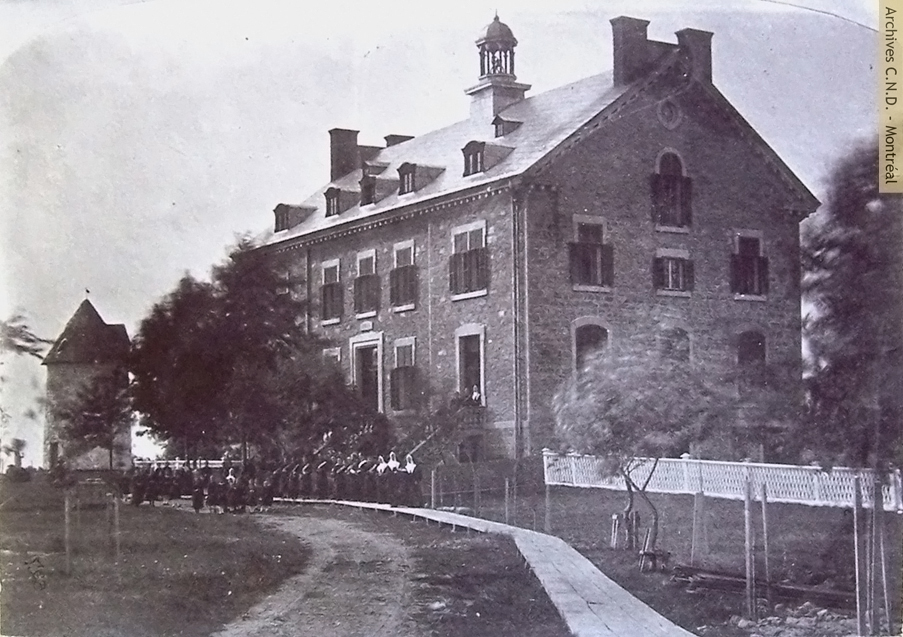