Pointe-aux-Trembles Convent was one of the first permanent schools founded by Marguerite Bourgeoys and her companions on the island of Montreal. From 1678, the Congrégation de Notre-Dame sisters contributed to the development of the community’s religious and educational services. At that time, the more than four hundred inhabitants of Saint-Jean Fort (today Pointe-aux-Trembles) formed about eighty families. At first, because they had to travel by canoe, two sisters made intermittent trips in the summer. They were: Sister de l’Assomption (Marie Barbier), herself from Pointe-aux-Trembles, and Sister Sainte-Ursule (Ursule Gariépy). In 1690, at the request of the first parish priest of Pointe-aux-Trembles, Sulpician Father François Séguenot, the missionary sisters settled permanently in Côte Saint-Jean Parish. The sisters’ first ministry was established in a modest wooden house topped by a wrought iron cross. In 1754, the house was replaced by a more solid and larger one facing the Saint Lawrence River. This stone building consisted of a ground floor, an upper floor and a mansard roof. At the time, the Congregation acquired property adjacent to the residence. In 1850, nearly one hundred years later, another floor was added to the house. In 1878, because of the ever increasing number of enrolled students, a larger convent-school was finally built on the adjacent property which the sisters had purchased years earlier. The convent-school received boarders and day students. The sisters provided education to French-language and English-language girls of the area. They offered such courses as drawing, piano and history. In 1881, the sisters received forty-one boarders. On October 5, 1896, a first gathering of former students and retired teachers was held. Three hundred persons attended this grand event, which was covered by the local press. For the occasion, the former students offered a Way of the Cross and two candelabra to adorn the convent-school’s chapel. At the turn of the twentieth century, the City of Pointe-aux-Trembles began to urbanize. In November 1896, the sisters witnessed the very first electric tramway to reach Pointe-aux-Trembles. This period was also marked by a population increase. In 1902, because the number of boarders had reached one hundred twenty-one, the building of an annex became inevitable if they were to receive all registered students. It was completed in 1909.

With regard to the built heritage of Pointe-aux-Trembles, the 20th century proved to be devastating. On June 28, 1912, the citizens were afflicted by a major fire which destroyed more than fifty buildings. The church and the convent-school were among the buildings which were spared. In April 1922, after having been granted a short respite, the convent-school was ravaged by a violent fire. The fire, which started in the attic, completely reduced the building to ashes. Immediately it was decided that a new convent-school, a fourth, would be built. Courses resumed rapidly since temporary classrooms were organized in City Hall and in Académie Roussin, under the direction of the Brothers of the Sacred Heart. The new convent-school was completed in 1924. In 1929, Notre-Dame-de-la-Réparation Alumnae Association was established; it numbered over two hundred former students. On June 8, 1940, the convent-school in Pointe-aux-Trembles celebrated its foundation’s 250th anniversary. A special Mass was presided by Archbishop Georges Gauthier of Montreal. Five hundred guests attended the concert and banquet. In the early 1950s, the boarding school, still an important part of the community, combined eight classes of boarders and five classes in the parish school. From 1952, lay teachers joined the ranks of the teaching staff. In 1954, the convent-school officially took the name Notre-Dame-de-la-Trinité. Six more classrooms were also temporarily set up in the church basement until the opening of Saint-Enfant-Jésus School on December 11, 1955. The Congrégation de Notre-Dame took over its direction. In 1959, a commemorative monument was inaugurated on the boarding school grounds. A cupola made of field stones, in which stood a statue of Marguerite Bourgeoys and the very first convent-school’s wrought-iron cross, was graciously offered by the townspeople. Regarding the educational aspect, in 1961, classical courses were inaugurated. Notre-Dame-de-la-Trinité Convent-School numbered two hundred seventy-one enrolled students, of whom ninety-two were boarders. From the 1960s, the students were offered classes in film. In 1963, a gymnasium was added to the convent-school. Two years later, in 1965, when the institution was associated to Le Royer Regional School Commission, it became a high school. The students were offered several options: General Curriculum, Sciences and Letters and Sciences and Mathematics. When the boarding facility was closed in June 1967, the dormitory was transformed into five additional classrooms. These renovations enabled the school to receive a record number of five hundred fifty students. Until the 1970s, the Congregation sisters continued to teach in Paul-Gratton and Saint-Enfant-Jésus schools, both co-ed.

After having provided education in Pointe-aux-Trembles for almost three hundred years, the sisters withdrew from teaching in June 1975, when their teaching contract with Le Royer Regional School Commission expired. In 1977, important renovations were undertaken in view of changing the premises into a retirement home for the elderly sisters. Some sisters continued their pastoral ministry in the parish. In June 1990, the 300th anniversary of the arrival of the Congrégation de Notre-Dame sisters in Pointe-aux-Trembles was celebrated. These celebrations were so important that the organizing committee called on the media to find as many former students and teachers as possible. On the program: a large reception preceded by a Mass, accompanied by a choir of thirty-five sisters, in Saint-Enfant-Jésus Church. Lastly, a vin d’honneur and a buffet were offered to the many guests. In 2004, the monument offered by the townspeople in 1959 was vandalised. The statue of Marguerite Bourgeoys was somewhat damaged and the iron cross from the first convent-school, dating back to 1690, was stolen. In November 2009, the sisters permanently left the convent located on Notre-Dame Street East, on the corner of Saint-Jean-Baptiste Boulevard. In June 2011, the building was sold to the Rivière-des-Prairies–Pointe-aux-Trembles Borough. In January 2016, after major renovations, the Maison du citoyen, which combines the Town Hall, several municipal services and a public hall, opened. 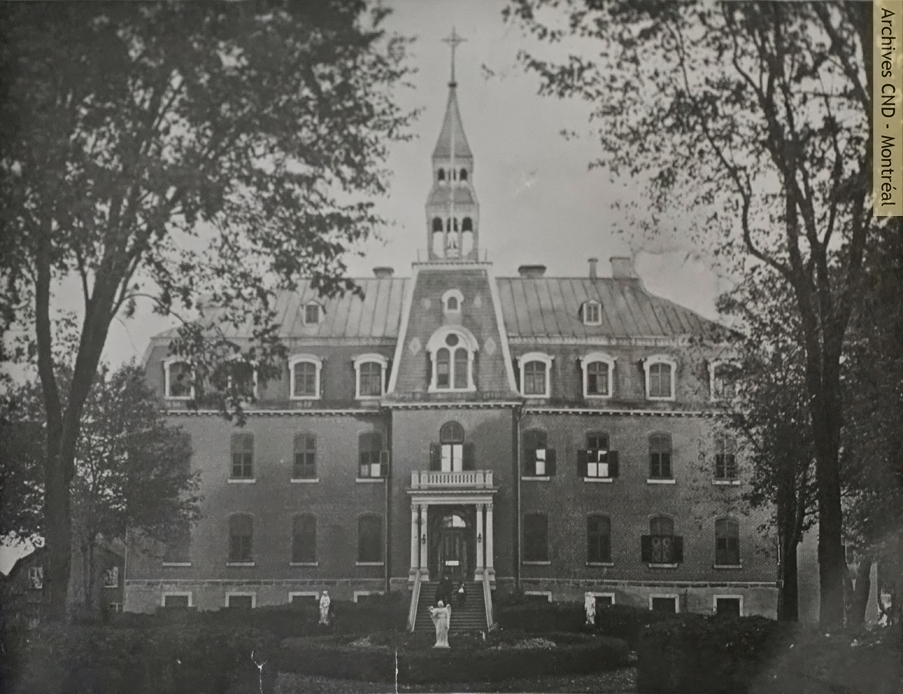 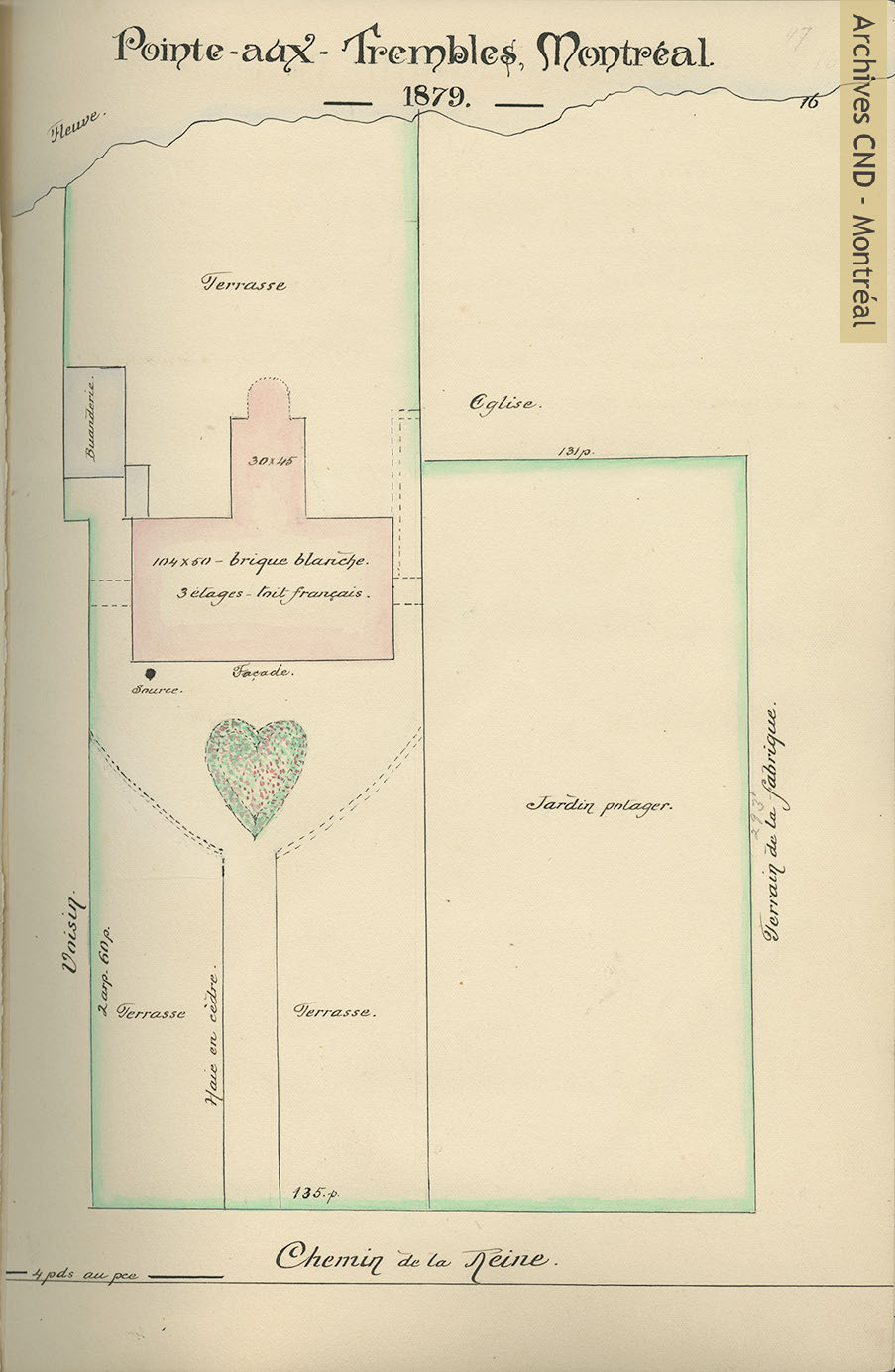 Plot plan of the Sisters of the Congregation, Pointe-aux-Trembles (Montreal), Quebec, [between 1879 and 1903]. 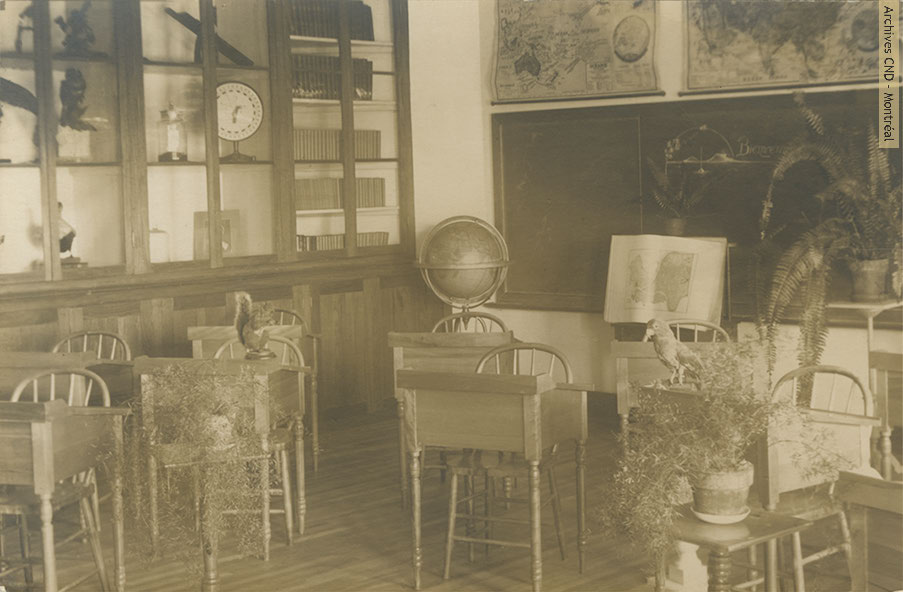 First class of the eighth and ninth grade, Pointe-aux-Trembles (Montreal), Quebec, [between 1920 and 1922].

Plot plan of the Sisters of the Congregation, Pointe-aux-Trembles (Montreal), Quebec, [between 1879 and 1903]. Archives Congrégation de Notre-Dame - Montréal.