The establishment of Mont Notre-Dame de Sherbrooke was the result of the initiative of Mrs. Clara Lloyd Felton, who had wanted the opening of the first Catholic school for girls in the region. In 1850, she launched a fundraising campaign to finance her project. When she first undertook this endeavour, the town was experiencing a population increase. The construction of the St. Lawrence and Atlantic Railroad linked Sherbrooke and Montreal. It was a few more years before the first Catholic bilingual school opened in Sherbrooke. In 1857, Father Alfred-Élie Dufresne, the parish pastor, entrusted the school’s direction to Les Soeurs de la Congrégation de Notre-Dame de Montréal. While waiting for the Congregation sisters to arrive, his sister, Luce Dufresne, taught the convent-school’s very first class. On November 21 of that year, the three founders, Sister Saint-Louis-de-France (Nathalie Lahaye), the superior, Sister Saint-Irénée (Ann-Bridget Phelan) and Sister Saint-Athanase (Louise Drolet), officially opened the school. When they first arrived, the building was only partly furnished and a low enrollment made the first years difficult. The school received weekly boarders and day students, and few fulltime boarders. Nevertheless, in 1857, the sisters opened in the same building another school for elementary level French-and-English-speaking students of the Saint-Michel Parish. Early on, the sisters of the Congrégation de Notre-Dame’s convent-school in Sherbrooke purchased two pianos. At that time, a lay teacher gave singing and piano classes and from the 1860s, art classes were offered. Here, young women students developed their drawing and painting skills. Around 1870, the reputation of the school began to spread both inside and outside the city. More and more young women from the United States, namely Vermont, Maine, New York and even Illinois, enrolled. At that time, six sisters taught approximately two hundred students, divided into five classes. In August 1874, the Diocese of Sherbrooke was established and the Most Reverend Antoine Racine became the city’s first bishop. The following year, he established Saint-Charles-Borromée Seminary (Seminary of Sherbrooke), an all-boys school. For its part, the all-girls boarding school, whose student population was ever-increasing, needed to be enlarged. Consequently, in 1875, an annex was built which doubled the school’s surface area. From 1880, the City of Sherbrooke, which was in full expansion, due to industrialisation, was equipped with an electrical utility. As the city expanded, so did the school. When enrollment doubled, ten sisters received about four hundred young women students, of whom more than sixty were boarders. As the Sherbrooke student population increased, building new schools became imperative. First, district schools opened, and later, more specialized ones. The convent-school’s administration fully understood these new requirements, and many schools were established. In addition to opening Saint-Michel Parish School in 1857, the sisters established Académie Sainte-Marie in 1886, an elementary school for girls located at the intersection of Murray and du Conseil Streets in Sherbrooke’s East district. In 1901, the Congregation sisters opened a co-ed school known as Du Petit-Canada School (later named Notre-Dame-du-Cénacle) in Sherbrooke’s South district, on the corner of Galt and Belvédère Streets. From 1903, the sisters of the Mont commuted daily by streetcar to Lennoxville, where they taught at Saint-Antoine-de-Padoue School. At the same time, before the beginning of the 20th century, the Congrégation de Notre-Dame sisters opened new schools in four other towns in the Eastern Townships: Stanstead (1875), Richmond (1884), Windsor (1886) and Lac-Mégantic (1895). Other than courses in Music and the Arts, the convent-school’s students also were offered classes in Literature, Arithmetic, Home Economics, Geography, History and Diction. From the 1890s, because of its geographical proximity to the Sherbrooke Seminary, male teachers taught Chemistry, Physics, Latin and Philosophy to the young women students. In 1901, the Congrégation de Notre-Dame’s convent-school in Sherbrooke was expanding and new construction was undertaken; hence, a second four-story brick annex was built. The original building was renovated in order to house the new chapel. In 1902, when this work was completed, the school officially took the name Mont Notre-Dame. From that time, thirty-five teaching sisters taught approximately five hundred students. Proud of its now established reputation, the Mont received many prestigious guests through the years. In February 1903, the school welcomed soprano Emma Albani, who performed to the delight of the students. In 1908, the Marguerite-Bourgeoys Study Circle was inaugurated and its members were invited to participate in debates and conferences on such varied subjects as literature and missionary life. In 1914, the students received the visit of Arthur Connaught and Louise-Margareta of Prussia, the Duke and Duchess of Connaught, who were passing through Sherbrooke. 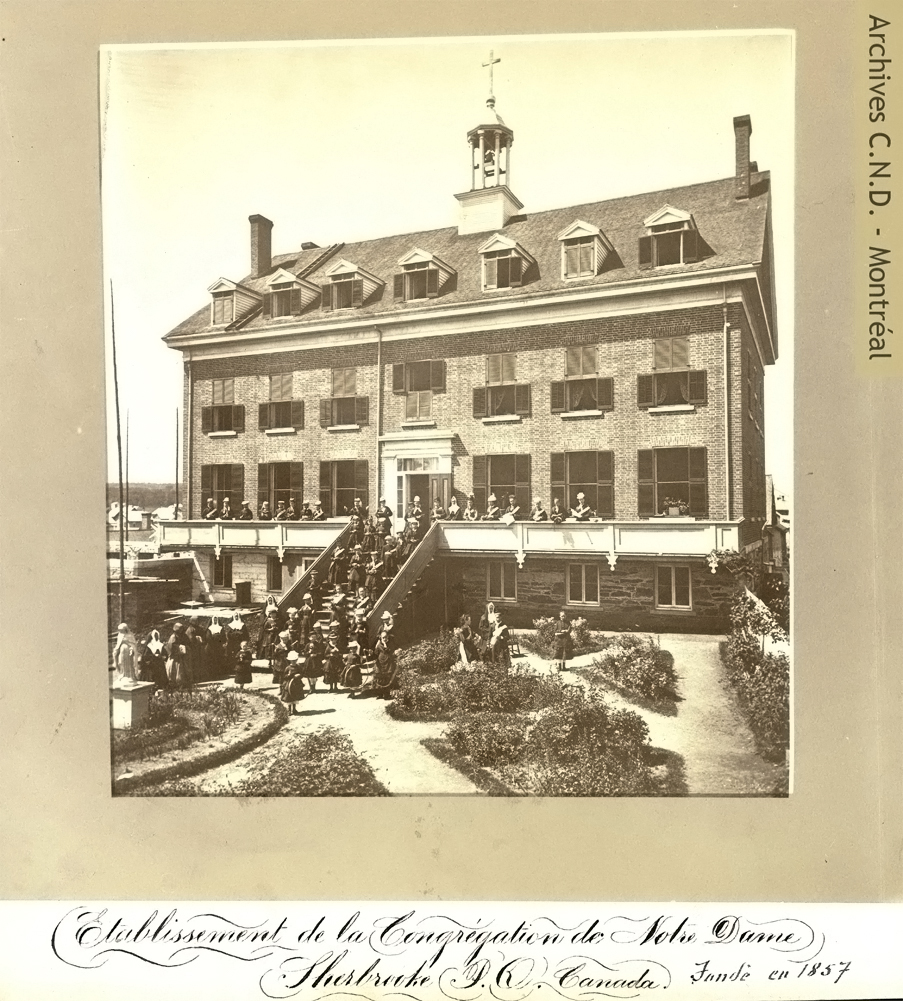 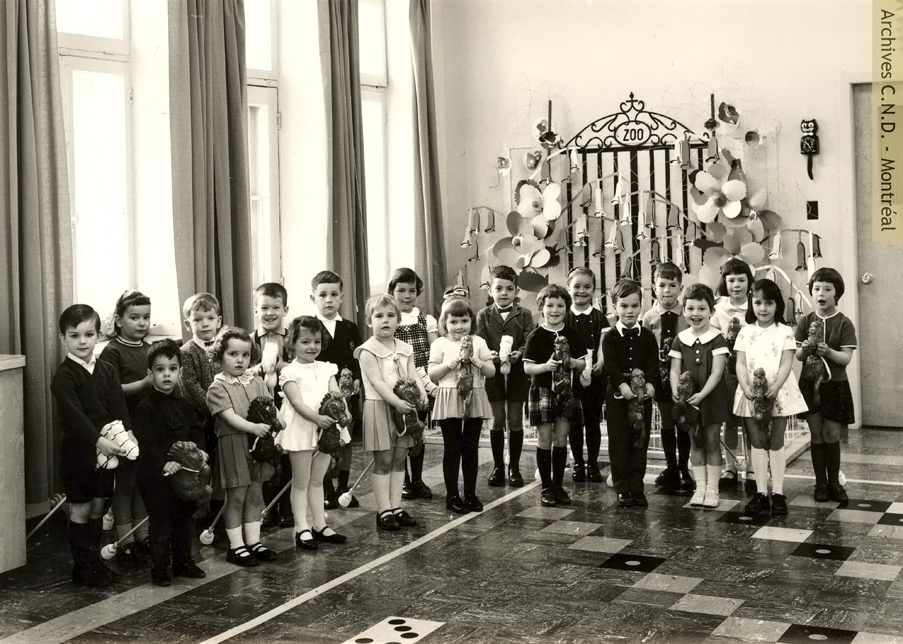 Group of three and a half and four year old children at Collège Mont Notre-Dame, Sherbrooke, Quebec, [1964 or 1965]. 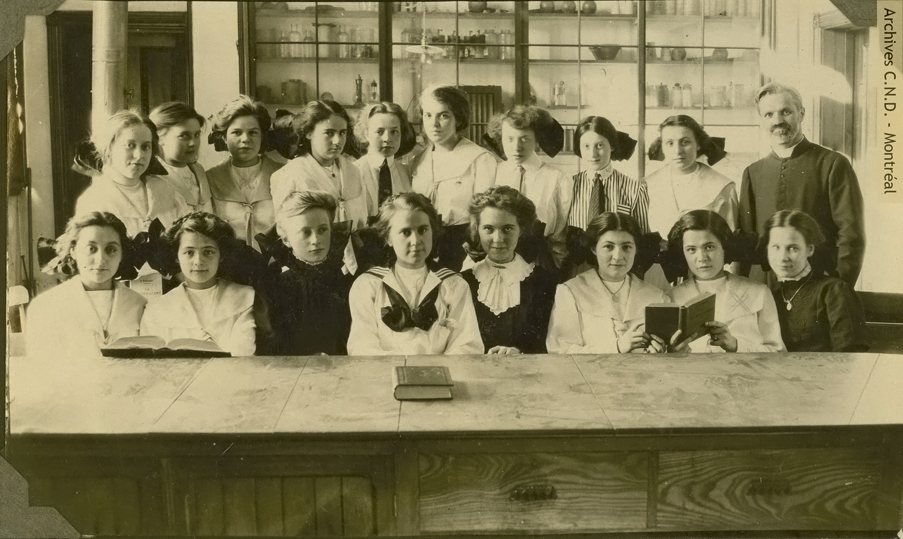 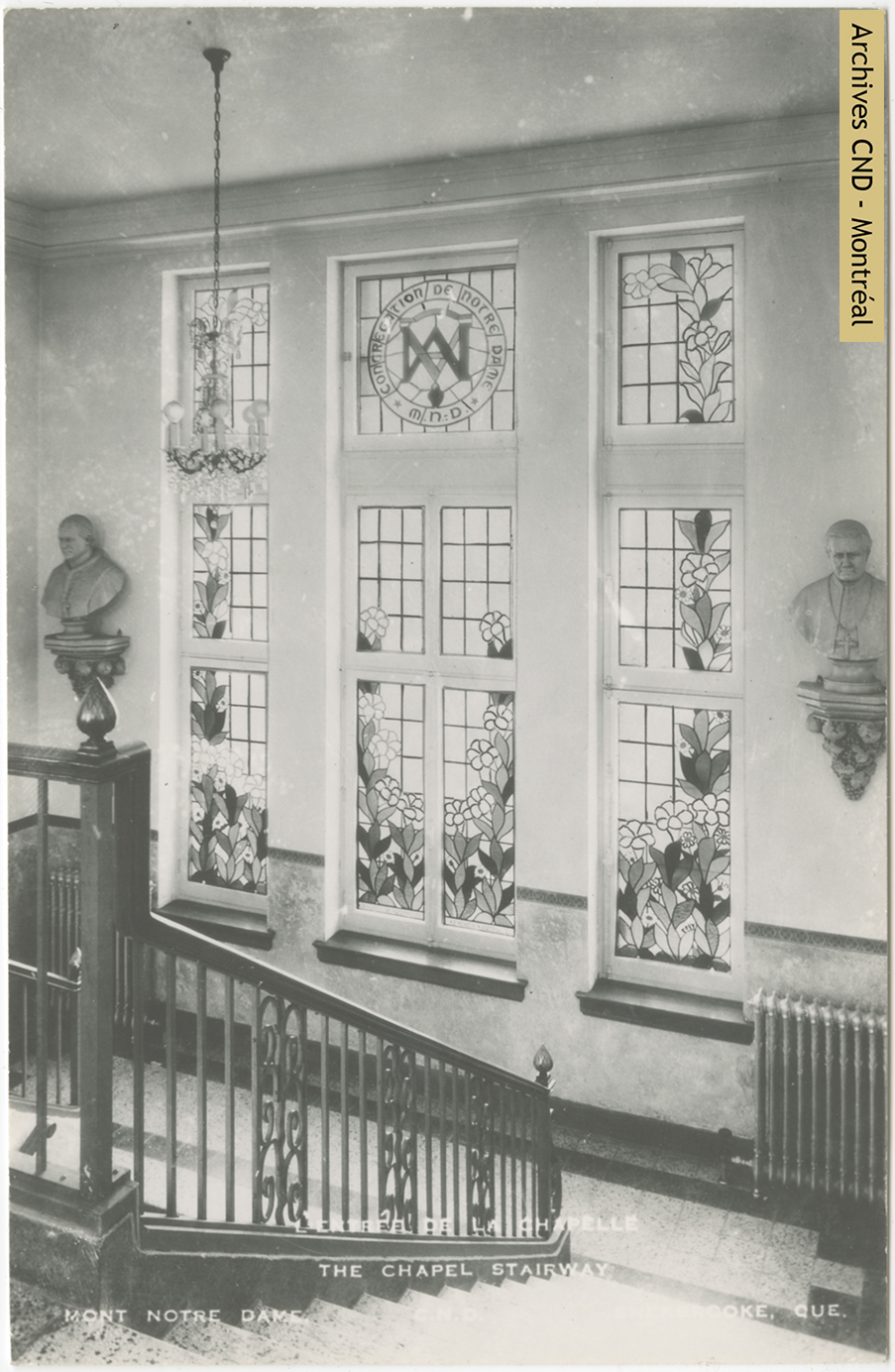 Entrance to the chapel of the convent of the Congrégation de Notre-Dame / Mont Notre-Dame, Sherbrooke, Quebec, 1929. 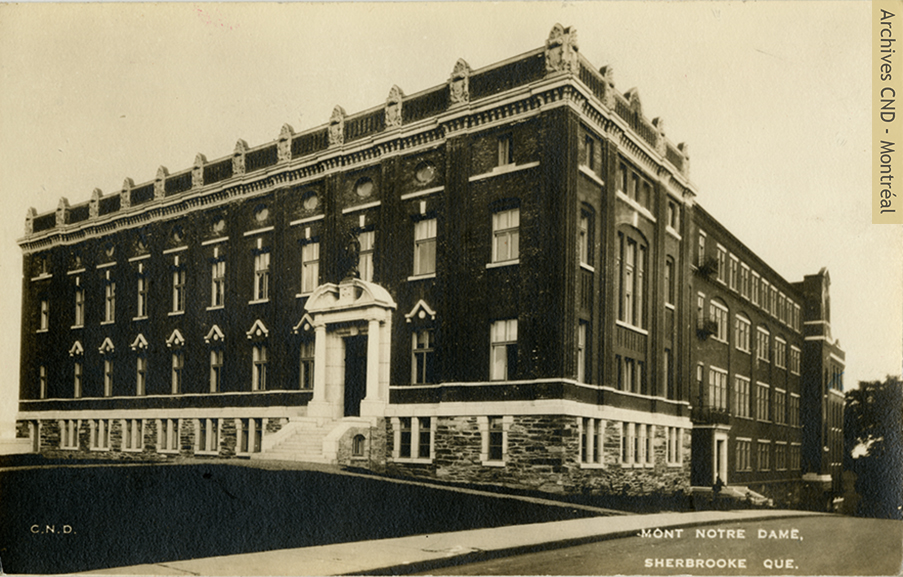 Group of three and a half and four year old children at Collège Mont Notre-Dame, Sherbrooke, Quebec, [1964 or 1965]. Photography : Studio Roland.