In January 1943, following measures undertaken by the parish priest, Father Stanislas Ferland and the General Council, the Congrégation de Notre-Dame arrived at Marguerite-Bourgeoys School in Baker Brook. Father Ferland wanted to entrust the direction of the school to the sisters. In 1943, his wish became a reality: The Congregation sisters signed a contract with the Village of Baker Brook School Board, which promised to provide the sisters accommodations including heat and electricity. In July, three sisters arrived in Baker Brook: The Superior, Sister Sainte-Marguerite-Marie (Émilia Chicoine), with Sister Saint-Antoine-de-Milan (Marie-Dora Daigle) and Sister Saint-Augustin-Marie (Marie-Germaine Blanchard). Unfortunately, there were some difficulties in the beginning. The sisters were not familiar with the New Brunswick studies program nor did they have their licenses to teach the higher grades. In September 1943, two qualified teachers, Sister Sainte-Valérie-de-Milan (Marie-Émilie Cormier) and Sister Sainte-Marguerite-d’Antioche (Mary Florida Pitre), took over in time for one hundred fifty boys and girls to begin the school year.

Because the sisters could no longer remain in their dwelling, they planned to move at the end of the school year. In 1945, they attempted to build a permanent residence beside the school, but the project could not be carried out right away. It was only in 1959 that the Congrégation de Notre-Dame purchased the land and proceeded building a convent. With regard to the school, it did not last very long; it was demolished in September 1951. In its place, a new twelve classroom-building was built. The students were very fortunate to benefit from a library, a music room, a cafeteria and an auditorium. In addition, two types of programs were offered: industrial and domestic. Outside the classrooms, several associations allowed the students to gather: the Croisillons, Croisés andJécistes, the Children of Mary, the Postulants, the Congréganistes, the Marian Union and the Cadettes. In 1975, because there was no one to carry on, the Congrégation de Notre-Dame took steps to sell the sisters’ residence. Early in 1976, the building was sold and in August the sisters permanently left Baker Brook. 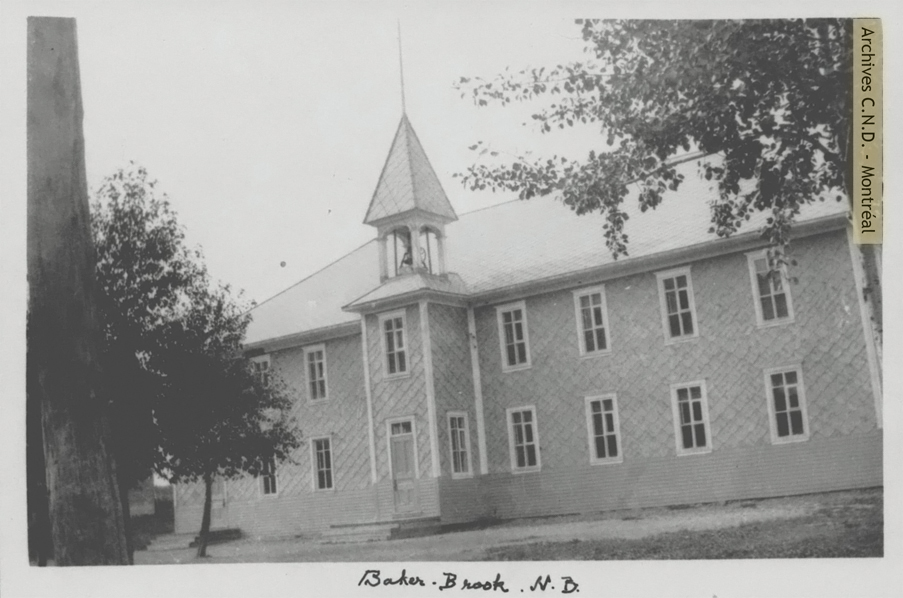