On October 3, 1868, the foundress and superior, Sister Sainte-Marie-de-la-Victoire (Marie-Louise-Rebecca Breadon) and Sisters Sainte-Catherine-de-Suède (Marie-Eliza Carbray) and Sainte-Berthe (Marie-Caroline Leclaire) arrived in Summerside and were received by Bishop Peter McIntyre of Charlottetown and Father James McDonald, pastor of Saint Paul Parish. On October 10, the sisters moved into the unfinished convent and began teaching twenty-five girls of which fourteen were Protestant. From 1878, at the request of the pastor, the boys received religious instruction on Sundays. Living conditions were very difficult and the winters were harsh in this first convent situated on the corner of Summer and Convent Streets. In 1882, Mr. Ronald McDonald donated a building. Because it was too far from the church, the sisters organized a lottery and used the $1,800.00 collected to build a new and closer convent on Central Street. Building began in 1884 and ended the following year. In 1891, the convent and the land were ceded to the Congrégation de Notre-Dame with a legal deed signed by Bishop Peter McIntyre. Reverend Joseph C. MacLean donated a church bell to the Congregation with which the sisters rang the Angelus for the parish three times a day. In 1942, to meet the needs of the school, the parish bought and placed at the sister’s disposal the house and land of Mr. Ulric Arsenault. On February 3, 1945 a fire destroyed the parish church. A new school was built using the same foundations. This school, which opened in 1946, included six classrooms, a large auditorium, and a gymnasium. The number of students progressively increased; in 1958 there were seven hundred seventy students. The sisters taught up to Grade 10, offered business courses to girls and taught the boys up to Grade 4. The sisters also offered private classes and taught music to both Catholic and Protestant students.

From the end of the 1950s to the end of the 1960s the Congregation was unable to have their school recognized by the Summerside School Council, a Protestant entity. This was because the authorities did not endorse instruction given by religious teachers in public schools. After much negotiation, the government of Prince Edward Island finally agreed to pay the teachers’ salaries. In 1961, there were only two hundred registered students as Saint Mary Convent only offered instruction from Grade 6 to Grade 10. Lack of space brought about the end of the business classes. In 1965, following a meeting between the sisters and the School Council, instruction provided by religious teachers in public schools was finally approved. Saint Mary School closed the following year. During the summer of 1966, the convent was demolished to build a residence for the sisters. In 1968, the sisters began the Headstart Program, a pre-kindergarten, in Saint Paul’s Parish Centre. The same year, the convent became an examination centre for the Toronto Conservatory of Music. Toward the end of the 1980s, most of the catechism classes were given by lay persons and in 1988 the Headstart Program ended. In 2003 the convent became a multipurpose centre and in 2006 was renamed Marguerite Bougeoys Centre. Since then, the building has been used by community organizations like the Latin American Mission Program Committee, the Family Violence Prevention Board and the Christian Life Community Group. The sisters are still very active. For example, they offer second-language courses, visit the needy and the elderly and work with the Associates of the Congregation. 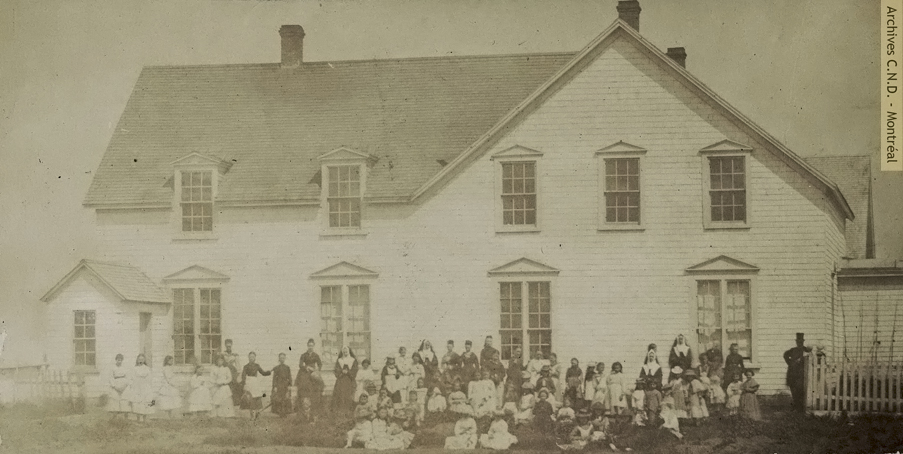 Dernière adresse : At the corner of Summer Street and Convent Street