From 1851, Father Cyprien Tanguay, pastor of Rimouski, wanted to have sisters to provide education to the girls of his parish. His wish became reality four years later, following the decision made by the General Councilof the Congrégation de Notre-Dame. The community was the first to send teaching sisters to the area. Sister Superior Sainte-Victoire (Julie-Adélaïde Rainville) and her companions, Sister Sainte-Marthe (Adélaïde-Restitue Morin) and Sister Saint-Ambroise (Marie-Élisabeth Dumas), moved into a one-storey wooden house with outbuildings. This structure, built in 1845, was named Maison de la Fabrique and served as a public hall and school. At the beginning of the 1855 school year, the sisters received forty-seven girls, both boarders and day students. In 1856, the building was renovated and a floor was added, permitting the structure to house a chapel. The first Masswas celebrated in 1858.

In 1871, the Congregation decided to build a bigger school. The sisters exchanged part of the school’s property for four acres of land near the church which belonged to the Saint-Germain Parish Council of Rimouski. The solemn blessing of the cornerstone took place on May 31, 1873. By the beginning of the 1875 school year, the three-storey stone and brick building was ready to receive students, even if it was not thoroughly completed. The former school was ceded to the Sisters of Charity. The costs associated with the building were higher than anticipated and, because of a recession in the region, the school received an ever-decreasing numbers of students. To overcome this financial challenge, the sisters asked the Department of Public Instruction if they could open a normal school. It was refused. In 1879, they asked Rome if they could sell their building. They asked Bishop Langevin of Rimouski to find a congregation that would replace them or that would buy the building. No community was able to help. In 1881, a fire destroyed the Seminary of Rimouski. The corporation of the Seminary bought the boarding school in 1882 and the sisters permanently left the town. 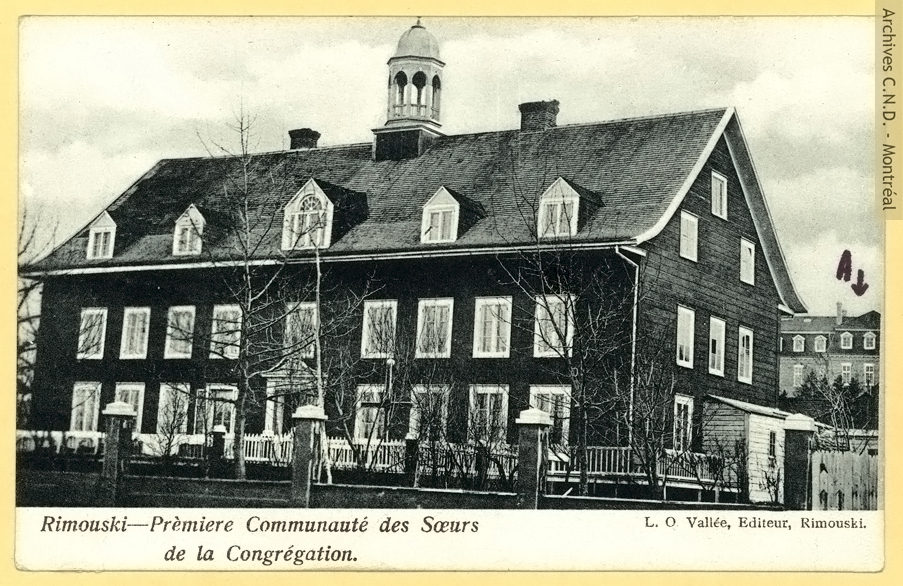