On August 15, 1881, five Congrégation de Notre-Dame sisters were sent to open a mission in Lewiston, Maine. They were: the Superior, Sister Saint-Marie-Françoise (Catherine Deane), Sister Saint-Marie-de-Lourdes (Frances Rebecca Honey), Sister Saint-Marie-Angèle (Mary Hawkins), Sister Saint-Wilhelmine (Agnes Fraser) and Sister Saint-Ermelinde (Mary Murphy). At that time, the town was rapidly developing and its mostly Protestant population had reached 20,000 people. The mission was located in Saint Joseph Parish, the English-language section of Lewiston. The Sisters of Charity (Grey Nuns) of Saint-Hyacinthe who had been there for three years lived in the French Canadian sector. At first, the Congregation sisters lived with the Grey Nuns. Father Thomas H. Wallace, who had started this initiative, acquired the Bonnallie property at 249 Main Street (corner of Bates Street) in order to transform the 1870 four-storey building into a school. From the beginning, more than three hundred students were received at Saint Joseph Parochial School. They were divided into six classes; the two boys classes were taught by lay teachers. Father Wallace also purchased the Lowell property located on Main Street (corner of Hammond Street), a few minutes on foot from the school. It became the first sisters’ residence. In 1884, the sisters moved to the presbytery which was located on the same street and had been formerly occupied by Father Wallace. In 1894, as the number of Catholics increased, Saint Joseph Parish was divided, and the new Saint Patrick Parish was established. The sisters moved into a new residence on the corner of Bates and Walnut Street, adjacent to the newly built church. Their new premises were in a wood cottage which had been enlarged to accommodate them.

At the beginning of 1896, the school was completely destroyed by fire, but this did not discourage the Sisters from teaching. They opened two classrooms in the sub-basement and sacristy of the church and four other classes in a public hall. In 1898, the local community numbered eight sisters who were responsible for eight hundred fifty girl students. Until 1905, the sisters received the children from both parishes. That same year, they left the school to the Sisters of Mercy. The Congregation sisters were entrusted with the mission of teaching in a new school founded by Father Wallace in his own parish. Saint Patrick Parochial School, located on Bates Street, near the sisters’ residence, was also known as Wallace Grammar School in his honour.

Bishop Walsh, with the new parish priest who replaced Father Wallace after his death, decided to build a larger convent for the sisters. The building designed by architect Timothy G. O'Connell of Boston was located on Blake Street (corner of Walnut Street) and, in September 1913, received the sisters. The chapel had five stained glass windows made by the O‘Neil Co. factory in Boston. In 1915, at the request of Bishop Walsh, music, drawing and sewing classes were added to the curriculum. Over the years, many students distinguished themselves in both arts and sciences. In 1930 and 1931, four students were awarded literary awards. School life was disrupted by the food rationing program, a consequence of World War II. In 1946, the Junior Daughter’s Solidarity study club was formed. In 1951, the students performed “God’s Way”, a two-act play on the life of Marguerite Bourgeoys; it was highly praised.In 1953, the school was completely renovated. On June 20, 1967, after 86 years of commitment to teaching, the sisters left Lewiston. 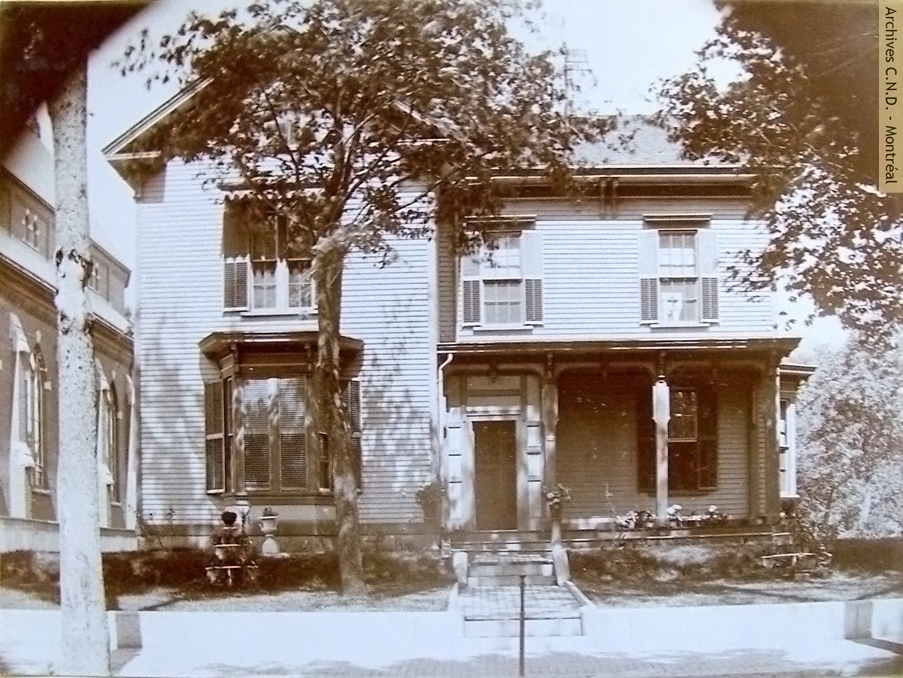