On July 9, 1955, the province superior of the Sisters of the Congrégation de Notre-Dame, Sister Saint-Charles (Mary Winnifrede Gillis), received a telephone call from Bishop John R. MacDonald of Antigonish inviting her to meet him in Larry’s River in the county of Guysborough, Nova Scotia. Once there, Father Neil MacKinnon and Bishop MacDonald advised her that they wanted to establish a convent-school in order to provide quality education to the children of this small isolated fishing town. The inhabitants of Larry’s River and Charlo’s Cove, the neighbouring town, were mostly of Acadian and Irish descent. Four sisters were assigned to establish the new convent-school. They were: Sister Saint John of Lorraine (Marie-Rosella Arsenault), Sister Saint Virgilia (Gertrude Eliza Williams), Sister Saint Ian Marie (Catherine Clare MacKinnon) and Sister Saint Rose Miriam (Mary Levangie). To help them settle into the parish, the Murphy family ceded them a house where they established Mount Carmel Convent-School. Bishop MacDonald also offered them an automobile so that they could travel to the neighbouring towns to teach. On September 24, 1955, the new convent-school was blessed by Father MacKinnon.

Throughout Mount Carmel Convent-School’s existence, the sisters were involved in the community and religious life of the neighbouring towns. The sisters participated in various organizations, for example, the Adult Religious Education Discussion Group, the Young Christian Students (1971) and the town’s 4-H Club. At the beginning of the 1958 school year, there were sixty-six students enrolled in the convent-school. During their annual vacation, the sisters of Mount Carmel Convent-School would join those of Mont Saint Bernard School in Antigonish. In 1966, when the School Commission decided to close Charlo’s Cove School, the students were transferred to Mount Carmel Convent-School. The number of enrolled students increased to ninety. In 1970, the building was declared too unsafe for the sisters to continue teaching there. The students were transferred to other schools in the county. The convent served only as the sisters’ residence. Even though the school was closed, the sisters continued to teach in other schools in the county. In 1989, the religious community in Larry’s River contributed to the establishment of the Guysborough Adult Literacy Association whose mission was to help adults learn how to read or improve their reading skills. In 1991, the Congregation received the Canada Literacy Volunteer Award for its participation in this organization. In 2004, the sisters of Mount Carmel Convent, always close to the Acadian community, contributed to the World Acadian Congress and participated in celebrations commemorating the four hundred year presence of the French-language Acadian communities. The convent permanently closed in 2007.

Mount Carmel Convent-School was established in 1955 in order to provide education to girls and boys from grade 1 to grade 10 in the small town of Larry’s River, Nova Scotia. The sisters’ mission of education extended to the towns of Lincolnville, Lundy, Seal Harbor and New Harbor. They contributed to community events in the towns as well as in the organization of parish picnics. The school was at first under the administration of the parish and later of the Guysborough School Board. The teaching sisters were under the direction of the General Council of the Congrégation de Notre-Dame. 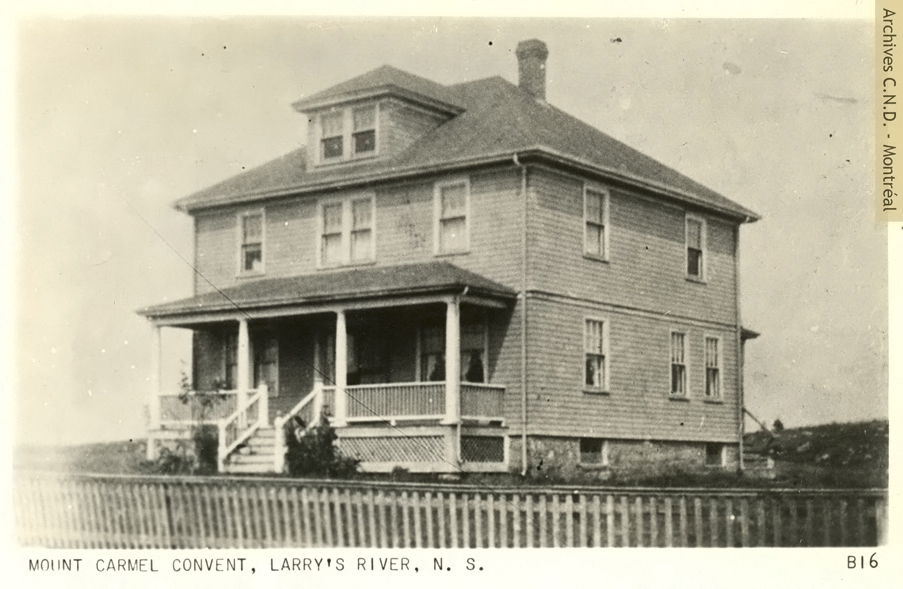