Saint-Roch Convent was established at the request of Jean-Baptiste de La Croix de Chevrières de Saint-Vallier, Québec City’s second bishop. In 1686, he acquired a house in Québec City’s Upper Town and offered it to the sisters of the Congrégation de Notre-Dame so that they could settle there. Thus was founded Maison de la Providence, a place of gathering intended to train young women in certain trades that would enable them to earn a living. This place was meant to mirror the Ouvroir de la Providence, established in 1663 in Montréal by Marguerite Bourgeoys. The building quickly changed its vocation to one of education. Notre-Dame-des-Victoires Convent was officially established in 1688. The following year the Bishop of Québec City asked Marguerite Bourgeoys to found a second hospital in Québec City. Although this request did not correspond with the community’s mission of education, the Congregation agreed and L’Hôpital général de Québec was founded within the convent. In 1692, some months after the official establishment of this institution by letters patent from King Louis XIV, the hospital’s direction was offered to the Augustines who, since 1639, had been working at L’Hôtel-Dieu de Québec. The hospital was transferred to the former convent of the Récollets, to the South of the Saint-Charles River. The sisters of the Congrégation de Notre-Dame were now able to concentrate on their role as teachers. In 1692, the convent that had been founded four years earlier was transferred to a new house, this one located in Québec City’s Lower Town, on Saint-Pierre Street. This school was partially destroyed by fire during the 1759 siege of Québec City and was rebuilt in 1769. For seventy-five years, the sisters – who numbered three or four depending on the year – continued their work as teachers there.

In the mid 19th century, the sisters moved to the Saint-Roch area. Construction of a larger convent began in 1842 and lasted two years. In 1844, the convent on Saint-Pierre Street closed and the sisters moved into the new Saint-Roch building, founded by Sister Sainte-Élisabeth (Marie-Louise Dorval), Superior, Sister Saint-Alphonse-de-Liguori (Marcelline Marsolais-Lemire), Sister Saint-Stanislas (Marie-Rosalie Plamondon) and two lay teachers, were responsible for the boarders. Sister Saint-Louis-de-Gonzague (Marie-Luce Proulx), Sister Saint-Pierre (Marie-Louise Leduc), Sister Sainte-Blandine (Marguerite Fontaine-Bienvenu) and a lay teacher were responsible for the day school. On the first year, there were over three hundred enrolled students. In addition to the regular program offered in French and English, the young women, boarders and day students were offered singing, and music theory classes and watercolour and painting classes. Most students were from Québec City, but others were from distant places like Percé, Lac-Saint-Jean, Mégantic, and several cities in the United States.

In 1862, to accommodate the growing number of students, a new wing was built on Saint-Joseph Street. It housed the chapel, the day school and a few dormitories. Later, in 1890, Saint-Roch Academy, a parish school subsidized by the school board, was built on Saint-François Street to accommodate a larger number of day students. In 1897, two sisters from Saint-Roch Convent moved to teach in a small school located on Anderson Street (today 3e Rue) in the Limoilou area. Two other sisters went to teach at Stadacona School. Two years later, the direction of the school was taken over by the Sœurs Servantes du Saint-Cœur de Marie.

From its establishment, the teaching of music was always of great importance at Saint-Roch Convent. In 1864, the convent already has six pianos for the music classes. The Société des Enfants de Marie was established in the convent in 1867.

From 1873, in addition to being a place of education and a place where the sisters and boarders resided, the convent also housed, a "Procure des missions," a kind of store that distributed textbooks, educational and religious material to schools of the Congrégation de Notre-Dame in Québec City and to those of the neighbouring cities. The convent also held an administrative function from 1880, the year after the Congrégation de Notre-Dame divided its territory into five vicarships. Saint-Roch Convent thus became the administrative centre of these vicarships in Québec City. Then in 1888, when the vicarships were being transformed into religious provinces, Saint-Roch Convent became the province’s administrative centre in Québec City.

From 1893, the school offered students a graduate-level course. In 1912, not only was Saint-Roch Convent falling into disrepair, it no longer had enough space to accommodate the approximately three hundred fifty students and thirty-nine sisters. As a result, in June 1912, the convent was demolished and the building of a brand new convent began on the same site. During construction, Saint-Roch Academy on Saint-François Street served as the sisters’ residence where a temporary chapel was set up. Classes were relocated to two nearby schools run by the Frères des Écoles chrétiennes. Eleven classes were temporarily transferred to Saint-Roch School (Saint-François Street) and three others to Sacré-Cœur School (Grant Street). The sisters moved into the new convent in May 1913.

In 1914, the convent-school became affiliated to the Université Laval. In 1924, the convent-school and the academy had forty-four sisters and more than nine hundred sixty students in twenty-five classes. In 1929, former students established Notre-Dame-du-Sacré-Cœur Alumnae Association. June 1944, marked the 100th anniversary of the establishment of Saint-Roch Convent. Current and former students, friends and members of the clergy were invited to three days of festivities. In the 1940s, the sisters offered courses from Grade 1 to Grade 7, and the first four years of Classical education. The sisters also gave courses in diction, Latin, Greek and English. For the 1956-1957 school year, there were about eight hundred enrolled students, of which more than three hundred thirty are boarders. They were encouraged to become involved in various groups such as Jeunesse étudiante catholique (J.E.C.), Cercle des jeunes naturalistes (C.J.N.) or Légion de Marie.

During the 1960-1961 school year, Saint-Roch Academy on Saint-François Street was put up for sale because of costly repairs to the building. About four hundred students, girls and boys, were transferred to other schools in the city. In 1966, the school was sold to the Saint-Roch Church Council.

In 1958, the Congregation received permission from the Department of Public Instruction to open, within Saint-Roch Convent, Notre-Dame-de-Québec Normal School, a teacher training institution. Renovation work was undertaken in order to receive new students. Three new classes, additional dormitories, a new library and offices were set up. The main entrance was also redone. In its first year, the school received sixty-five students. In 1962, the convent permanently ceased to offer Classical-level courses in order to devote itself to training the students enrolled at the Notre-Dame-de-Québec Normal School. In 1963, the province’s administrative centre, which had been established more than eighty years before, was transferred to Collège Notre-Dame-de-Bellevue. As a result, the school population was comprised of two hundred seventy students, of whom more than one hundred were boarders, about thirty teaching sisters and some lay men and women teachers.

During the year 1960, the Parent Commission, who proposed that teacher training be provided by universities, put normal schools into question. Therefore, the school permanently closed and, in 1970, the sisters left the building in the Saint-Roch area.

Shortly afterwards, the Classical-level day school, Saint-Jean-Eudes, a co-ed high school which had been previously situated in the Limoilou area, moved in the former sisters’ convent. Only two years later, the building was empty once again. Having launched a neighbourhood large-scale revitalization project with the construction of the Saint-Roch Mall, Québec City bought the convent. In the mid-1970s, the building was finally destroyed to build a Holiday Inn Hotel (which became a Ramada Inn and, in the 2000s, Hôtel Pur). The sisters were transferred in several residences and continued their community work in the area until their permanent departure in 2002. 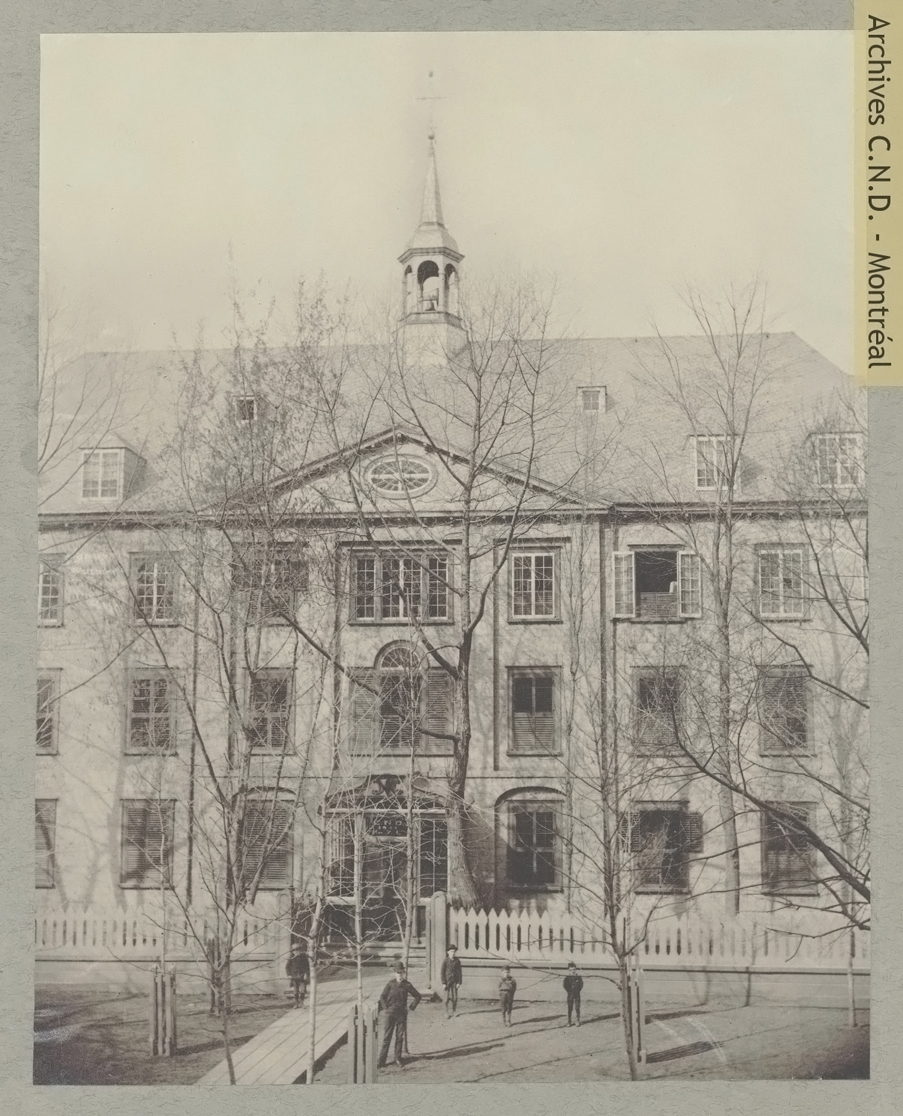 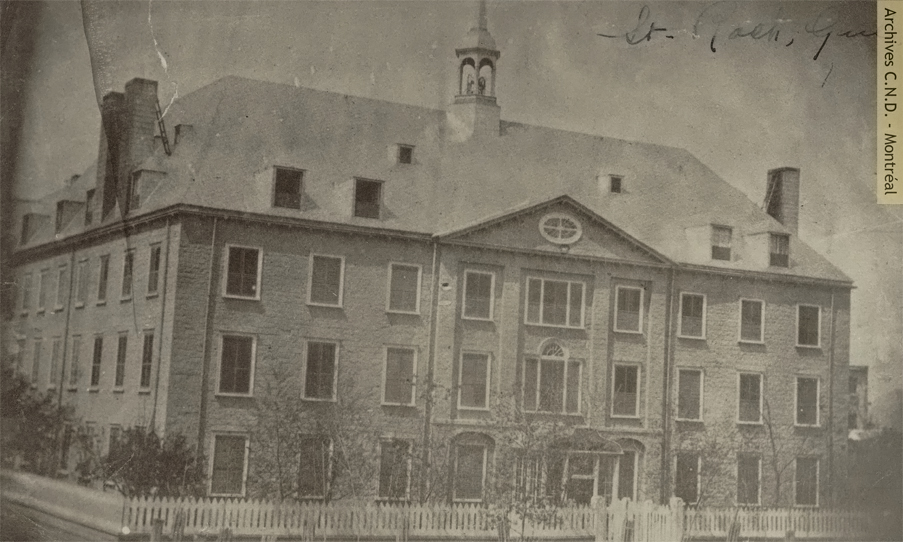 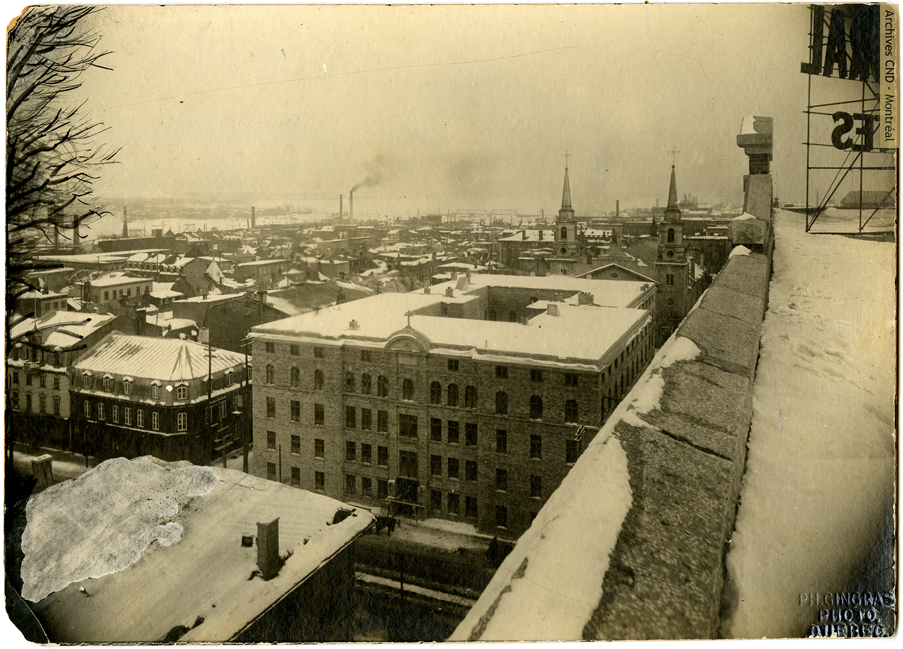 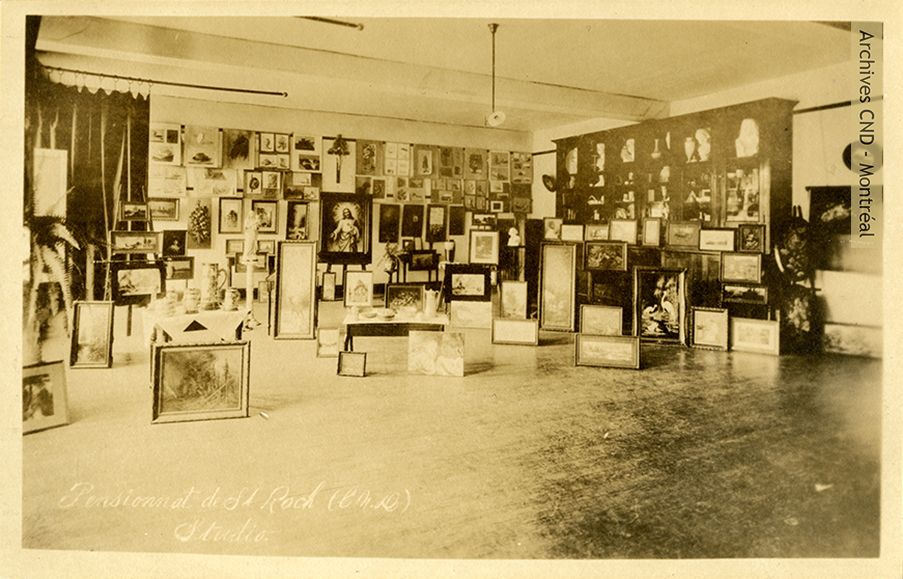