In 1908, after some years of effort to try to persuade education officials, the Congrégation de Notre-Dame opened École d’enseignement supérieur for young women (also known in English as Superior School and Notre Dame Collegiate Institute), the first Catholic classical women’s college in Quebec. From 1910 to 1925, it was the only French-language centre for higher education for young women in Quebec, and from 1910 to 1932 the only one in Montreal. Many Montreal women, such as Marie Gérin-Lajoie (Lacoste), appealed to the Congrégation to establish a university-level institution. The options for Catholic young women in Quebec who wanted to pursue studies at this level were either to move abroad or enroll in Protestant institutions. From 1904, many Congregation sisters were in favour of this initiative which promoted higher education. Among them were: Sister Sainte-Olivine (Marie Antoinette Adélaïde Trudel), assistant to the superior at Villa-Maria, Sister Sainte-Agnès-Romaine (Ann Ursula Campbell), also of Villa Maria, and Sister Sainte-Euphrosine (Marie-Louise-Léontine Gauthier-Marsan-Lapierre), head mistress of studies. However, the project was shelved as the Catholic Committee for the Council of Public Instruction ruled that "it was not appropriate to propel young women into the spheres of higher education." In the spring of 1908, the Montreal daily newspaper, La Patrie, announced the September opening of the first secular (or neutral, from a religious standpoint) institution of higher education for young women. The time had come to once again approach the religious authorities with an official request, an initiative in which participated Sister Sainte-Anne-Marie (Marie-Aveline Bengle), superior of Mont Sainte-Marie and her colleague, Sister Sainte-Sophronie (Marie-Elmina Gagnon), among others. Thanks to these efforts, on June 16, 1908, École d’enseignement supérieur for young women was approved by Bishop Bruchési and, on September 11, 1908, became affiliated with Université Laval de Montréal. Thus on October 8, the first Catholic classical college for young women was inaugurated on the Congrégation de Notre-Dame’s mother house premises at 3040 Sherbrooke Street West. In 1909, the business program which had been given at Saint-Charles School (1907), moved to the mother house and was integrated with École d’enseignement supérieur. It was named Notre Dame Ladies College. Education provided to French and English language students at École d’enseignement supérieur was divided into three sections: Letters, Sciences and Business. In addition to sisters, lay teachers were hired to teach the regular curriculum and other specialized courses, making it possible for students to obtain diplomas and certificates. In 1922, the institution became affiliated with Université de Montréal and took the name École d’enseignement secondaire. In 1926, it was renamed Collège Marguerite-Bourgeoys (The English section kept the name Notre Dame Ladies College.). In the summer of 1926, the school (except for the business program which became private) moved to the new building which was constructed to house Institut pédagogique (Institute of Pedagogy) at 4873 Westmount Avenue. Institut pédagogique was a teacher training university whose purpose was to provide the most complete pedagogical formation to persons who aspired to become teachers; it granted university teaching diplomas and university degrees. In 1912, Sister Sainte-Anne-Marie, then head mistress of studies, outlined to the religious and civil authorities the need for such an institution. From September 8, 1916, a course in post-school teaching was offered on Saturdays at the mother house. This is the basis on which École normale supérieure was officially established thanks to An Act Respecting the Establishment of an Educational Institute in Montreal (Act 42, 1st session, 16th legislature, 14 George V) voted on February 13, 1924, sanctioned by the Lieutenant-Governor on April 13, 1924 and effective on March 15, 1924. The provincial government provided financial support. On April 17, 1925, the construction of a new building began and on October 8, 1925, the corner stone was blessed. In December 1925, Sister Sainte-Anne-Marie and Sister Marie-Élisa (Adelaïde Sophie Anna Marie Lavergne), her collaborator for the English section, travelled to Europe to visit major pedagogical institutions and to find out about the most recent teaching methods and professional teacher training requirements. They returned for the opening of the building. On October 29, 1926, Institut pédagogique (in English sometimes called Teacher Training College) opened. The institution offered a regular curriculum called Cours régulier fermé which contained a range of formation and programs which ran parallel to those of Collège Marguerite-Bourgeoys. There was the arts section known as École normale de dessin (1925); some of its courses were given by professors from École des beaux-arts de Montréal. There was also the music section known as École normale de musique (1926); its impact would be remarkable. On March 10, 1927, Institut pédagogique became affiliated with Université de Montréal. This affiliation charter enabled the institute to grant university diplomas and degrees in teaching: Bachelors, Licenses and Doctorates. Summer courses were also offered in order to encourage the development of religious and lay teachers.

Over time, the school continued to grow. On November 22, 1928, Institut pédagogique’s École de chant liturgique (School of Liturgical Song) offered courses; it closed in 1969. On March 15, 1929, the university diploma granted by Institut pédagogique was officially recognized; it was equal to the teaching licenses which were granted to young men in the normal schools. In 1931, Marie Gérin-Lajoie, one of the first students to obtain a Bachelor degree, opened Institut pédagogique’s École d'action sociale (School for Social Action); it remained open probably until 1943. In 1932, Institut pédagogique’s Homemaking section was established and would become École supérieure des arts et métiers (College of Arts and Crafts). This school, located at 3433 Stanley Street, was a branch of Institut pédagogique until the 1950s, when it changed its vocation in order to offer adult students courses in personal development; it took the name École d’arts et métiers. From 1935 to 1937, the Business section was named Notre Dame Secretarial School (also known as The Mother House). In 1936, a specialized teaching course was established. It focused on teaching preschool children, and intellectually and physically challenged children; it closed in 1954. In 1937, Sister Sainte-Théophanie (Marie Anne Graziella Janvière Gauthier), an early collaborator of Sister Sainte-Anne-Marie, became director of Institut pédagogique. In 1943, Collège Marguerite-Bourgeoys’s English-language section became private and took the name Marianopolis College. As Institut pédagogique continued to grow, space began to lack. In the 1950s, the building was enlarged with the addition of wings in order to house classrooms, art studios, bedrooms, a chapel, an auditorium and an amphitheatre. In June 11, 1953, following the Department of Public Instruction’s 1953-1954 reform and by ministerial decree, the teacher training section known as cours régulier fermé gained a new legal entity and became École normale de l’Institut pédagogique. Its first principal was Father Georges Levasseur. On February 10, 1955, Collège Marguerite-Bourgeoys was incorporated (Provincial Legislation, 3rd session, 24th legislature, 3-4 Elizabeth II, chapter 143). In September 1955, a kindergarten demonstration class was annexed to the pre-school teacher training section. In 1965, after the publication of the Parent Commission Parent, Université de Montréal announced the foundation of a Faculty of Education; from 1965 to 1969, École normale of Institut pédagogique became affiliated. It was later absorbed when Institut pédagogique, the teacher training college, closed. On January 11, 1968, Collège Marguerite-Bourgeoys, Institut pédagogique (including École normale de musique) combined into one corporation registered as Institut Marguerite-Bourgeoys (3-4 Elizabeth II, chapter 143, decision of the Council no. 59). This denominational school offered a general curriculum at the pre-school (Kindergarten classes were organized so that teachers in training could observe and experiment.), pre-college, college and university levels. With regard to École normale de musique, it was in full expansion and, in July 1969, became affiliated with Université du Québec à Montréal (UQAM) under the terms of a service contract in accordance with the recommendations of the Rioux Report. The program was organized as a music module for the formation of teachers. In 1969, Collège Marguerite-Bourgeoys was declared of public interest by the Ministry of Education. The first diplomas of collegial studies were granted in June 1970 and, in September 1971, the private college for young men opened. In 1972, the Congregation requested a new incorporation for Institut Marguerite-Bourgeoys under the legislation modifying the charter of the Sœurs de la Congrégation de Notre-Dame (11-12 Elizabeth II, chapter 124 of laws of 1963, session 1; registered November 8, 1972, Libro 1536, Folio 48). Two years later, Institut pédagogique permanently ceased all its activities and École normale de musique was absorbed by UQAM in 1976. 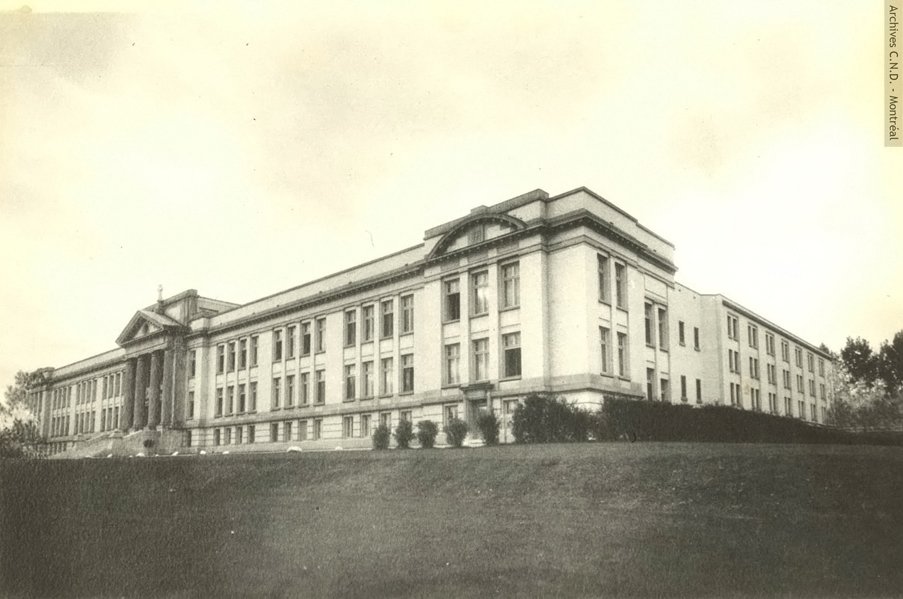 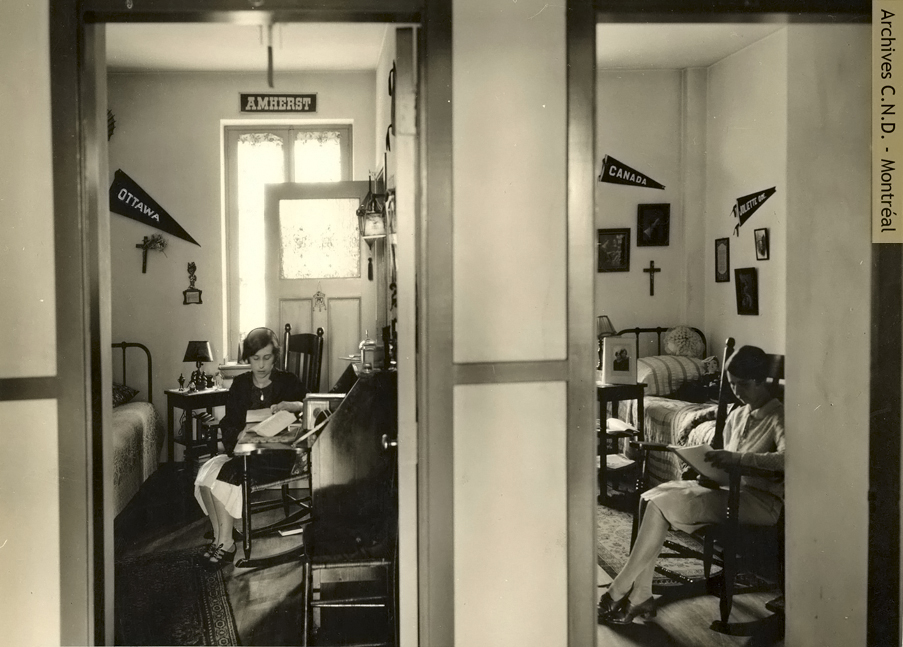