In 1904, Father Alexander L. McDonald asked for the Sisters of the Congregation to teach the children of the newly established parish in Inverness, Cape-Breton. The mission in Inverness, Nova Scotia, began on November 30, 1904 with the arrival of Sister Sainte- Angélina, Superior(Marie-Caroline Bellemarre), accompanied by Sister Saint-Jean-du- Cénacle (Henriette-Anne Joyce). There was as yet neither church nor convent in Stella Maris parish. A small house, on the site where the future church would be built, was first used as the convent. On December 6, 34 girls and 31 boys arrived for their first day of school. The number of students doubled in a few days. In January 1905, Sister Saint- Bernard (Agnès Gaudet) joined the mission to teach music, with the help of a piano that came from Halifax. In 1909, Holy Family Convent was completed. In the mid 1930s, a house was built near the convent for the domestic science classes. In April 1940, the Alumni Association was begun, directed by Mrs. Mullins of Sydney. The 50th anniversary of Holy Family Convent was celebrated in 1954. From 1910 to 1960, an average of 500 students per year attended the school from the primary grades to Grade 12. Music, arts and crafts, domestic science and physical education were also taught.

In 1964, Inverness Consolidated School was established to receive the students from the two local schools, Inverness Academy (Protestant) and Holy Family Convent (Catholic). Among the schools’ eight hundred students many belonged to groups started by the Sisters: a 4-H Club, a Young Christian Students group, a Glee Club (which often appeared on television) and even a team for the nationally broadcast television show, “Reach for the Top.” On August 28, 1970, the Sisters moved to a new residence built across from the former convent on MacIsaac Street. In the same year, the house where domestic science had been taught was offered to the Knights of Columbus and a new residence was built close by. Toward the mid 1970s, some Sisters offered health care services in the brand new hospital. In the 1980s, the number of Sisters was decreasing while the orientation of the mission at Inverness centered on community work in the parish and religious education. Holy Family Convent was sold to Stella Maris Parish in August 1992 and the two Sisters still living at the residence moved to Hillcrest Street. This house closed on July 20, 1993. The two Sisters went to live in Saint Joseph Convent in Mabou while they continued to visit the community in Inverness. 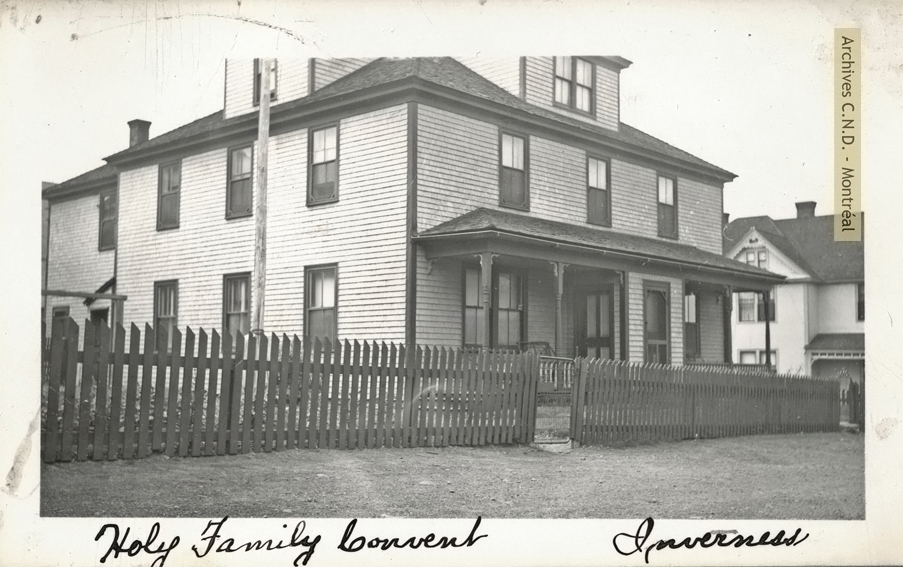