The year 1885 saw the return of the Congrégation de Notre-Dame sisters to Cape Breton, Nova Scotia. Indeed, one of the Congregation’s very first missions – from 1727 to 1745, and later from 1749 to 1758 – had been in Louisbourg. Over a century later, at the request of Father James Quinan, pastor of Sacred Heart Parish in Sydney, the sisters took on the direction of the boarding school for girls. In return, Father Quinan bequeathed to them the building he constructed for them. On October 29, 1885, the founding sisters were nominated for this new mission in Nova Scotia. They were: Sister Sainte-Domitille (Marie-Sophie-Hombéline Larochelle), Sister Sainte-Macrine (Marie-Louise Martin), Sister Sainte-Hélène-de-la-Croix (Marie-Anne-Donalda Poirier) and Sister Sainte-Marie-Alexis (Marie-Héloïse Tremblay). The arduous winter slowed their journey. They stopped in Quebec City and in Antigonish where they met Bishop Cameron of Arichat. On December 29, 1885 the convent was blessed during the first Mass in the small chapel. Many benefactors offered gifts and services to the sisters who moved into the convent on George Street, Sydney.

A Catholic boarding school in the region was not always met with positive reactions. Indeed, some citizens opposed the project and demonstrated their disapproval with acts of vandalism against the convent. Also, the opening of the school was postponed because of a small pox epidemic. On January 6, 1886, despite the difficulties, the beginning of the school year proceeded well with ninety-four enrolled students; of these only nine were boarders. In 1887, there were four filled classes; five years later, day students numbered about one hundred and boarders, twenty. At first, only elementary level classes were offered; later high school level courses were added. In December 1892, the classes of the convent-school, which had been private, were brought under control of the government and were subsidized by the municipality.

That same year, students were invited to participate in the Chicago World’s Fair with their classical lessons. In 1897, modernity arrived at the boarding school when electricity and the telephone made their appearance. Over time, the number of students – mostly Catholic, but also Protestant – continued to increase. In 1902, there were three hundred six enrolled students of whom forty studied piano. Students often participated in academic competitions with the Protestant schools and regularly gave concerts. In 1907, the province’s Department of Education decided to close the high school classes. This was not well received by the students of Holy Angels Boarding School because it meant they would have to attend the Protestant school. To be able to continue offering high school level courses, the sisters refused to adhere to the public school curriculum. Consequently, the school became private once again and was no longer subsidized nor administered by the School Commission. In June 1907, an annex was added.

In October 1924, the Holy Angels Alumnae Association was established and from 1947, there was also an alumnae association for junior grades. Students were encouraged to join such associations as the Missionary Crusade, Guardian Angels Society and Children of Mary, and to participate in competitive sports, such as basketball. Many Holy Angels Convent-School students chose religious life and entered the Congrégation de Notre-Dame novitiate in Montreal.

Academically, during the 20th century, Holy Angels Convent-School offered, in addition to regular classes, courses in art, music, science, history, Latin, English, French, and, from 1952, a business course. In 1959, important construction work was done at the boarding school: a brand new school completed the old convent; the convent was entirely renovated. From that time, the convent was named “Holy Angels High School” and became public once again. From the early 20th century, branch schools succeeded one another: Saint Joseph School, Constantine School, Sacred Heart School, Saint Anthony Daniel School and Sheriff Junior High School. The focal point of all these schools was Holy Angels Boarding School, where resided many of the sisters who were working in these branch schools.

In 1967, a Household Arts Department was added to the convent-school. Students annually prepared sewing, embroidery and knitting exhibitions. Plays and recitals, meetings and guest speakers were presented at the convent-school auditorium. In 1973, for the very first time, boys were admitted to Holy Angels High School. At the turn of the 21st century, there were thirty sisters at the school – one of whom was the director – but they no longer taught on a full-time basis. In 2011, there was only one sister employed at the school. That same year, the school was put on sale and the sisters moved from the convent to a new residence. In 2013, New Dawn Enterprises acquired the Holy Angels property. 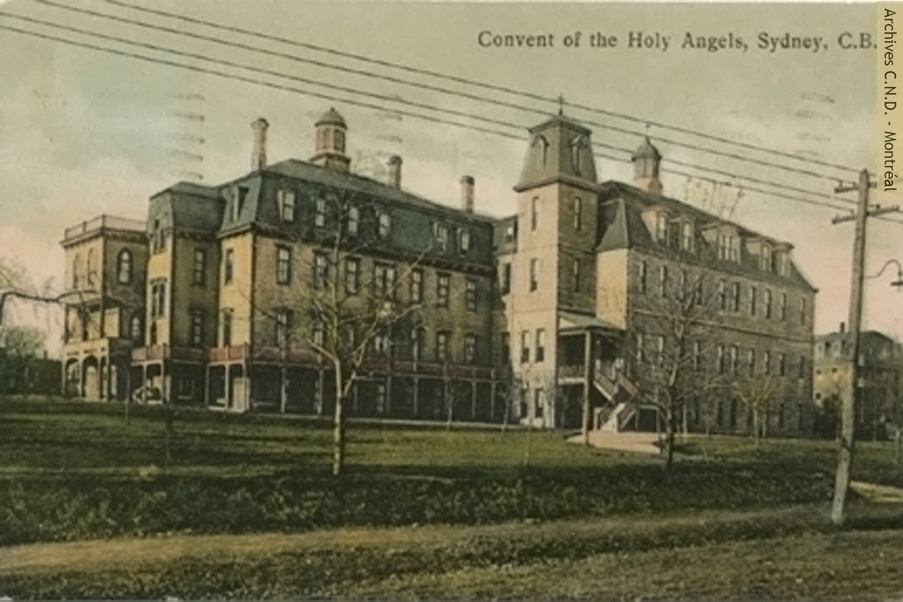 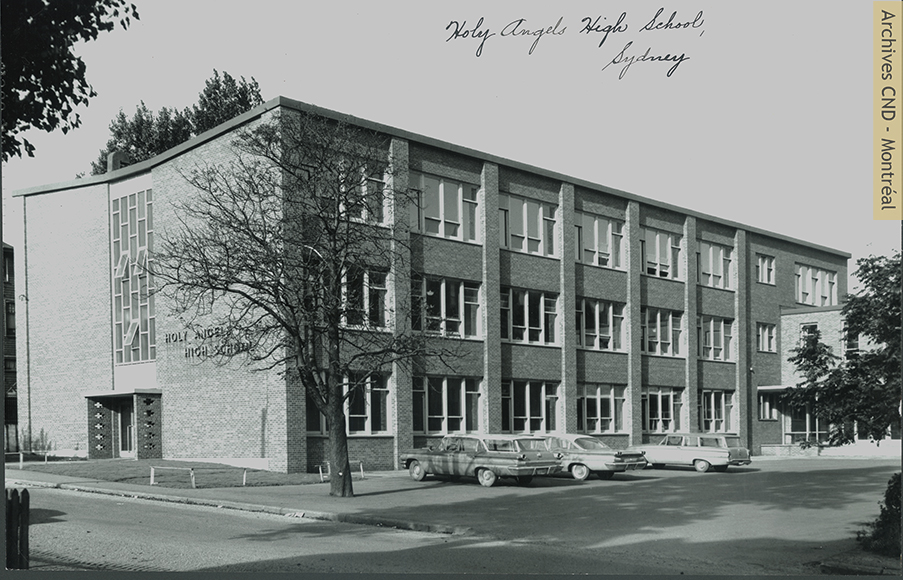