Saint-Luc High School was established in 1959 in Notre-Dame-de-Grâce Parish in Montreal. The director and founder was Sister Sainte Marie-Mathilda (Cécile Boileau) of the Congrégation de Notre-Dame; she was accompanied by eleven sisters and eight lay teachers. In September, the teachers and their three hundred ninety-eight registered students were temporarily housed in Saint-Antonin School, a public school, since construction of a new Saint-Luc School on Côte-Saint-Luc Road was not completed until April, 1960. During the first year, the sisters commuted to school every day while their residence was being built on Côte-Saint-Luc Road; they moved into the new building in November 1960. The following year, five hundred thirty young women arrived for the first day of school. They were divided into sixteen classes from grade 7 to grade 12; this last one focused on science. In 1962, a business course was opened. In September 1964, the Montreal Catholic School Commission decided to transfer the grade 11 class to Esther-Blondin School. Two months later, the students took, for the first time, Quebec Ministry of Education exams, a ministry which was established that same year.

In September 1965, the direction of the school was passed on to lay personnel; some sisters of the Congrégation de Notre-Dame continued to teach there while others left the school to pursue other missions. The teaching staff was at that time made up of fourteen sisters and twenty-two lay teachers. In August, the school’s sewing room was replaced by a game room; a ping-pong table was installed. In July 1966, the sisters of the Congrégation de Notre-Dame dropped their religious names and used their civil names; the students, lay personnel and the sisters themselves slowly became accustomed to this change. In September, the school became co-ed.; a woman assistant director was named for the girl’s side and a man, for the boy’s side. In January 1967, Catholic school teachers in Montreal went on strike; students did not have school for five weeks. In June, the sisters’ residence closed; the building became a branch of Saint-Luc School. The sisters who continued to teach there lived at Villa Maria College. 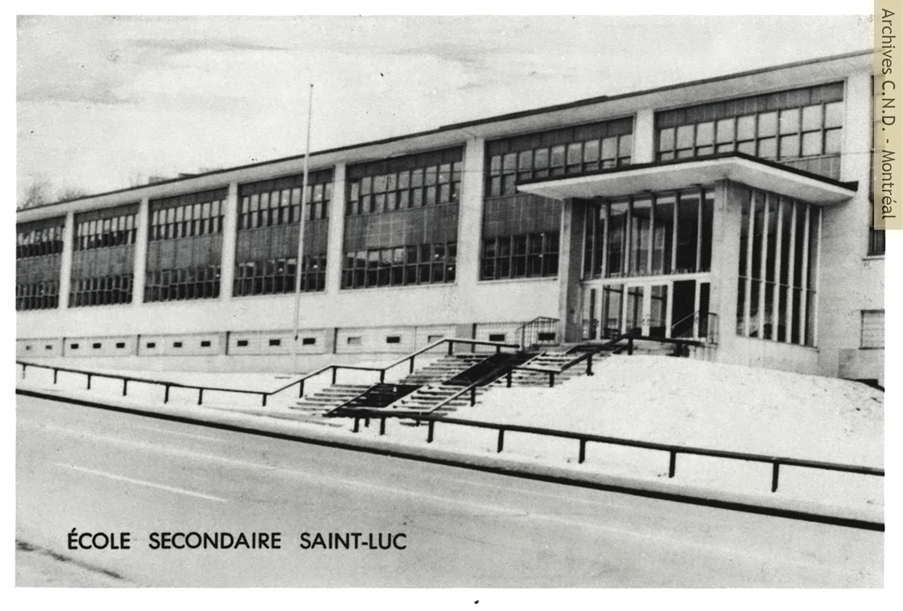