Shortly after his arrival in Sainte-Hélène Parish, Father Napoléon Dubuc requested that the Montreal Catholic School Commission establish a school for girls. In 1905, the school commission agreed to provide rooms for the following school year and Father Dubuc made a request to have teaching sisters from the Congrégation de Notre-Dame. Sister Saint-Anatole (Marie-Joséphine Perrier) and Sister Saint-Jean-du-Désert (Marie-Louise-Antonia Baril) were sent to establish the mission. The school was temporarily organized in rooms next to the parish chapel, but the space was too small for the one hundred sixty-five registered young women. Additional rooms were opened on Notre-Dame Street in the sub-basement of a shop. Sister Sainte-Madeleine-de-Jésus (Marie-Vitaline Duhamel) with two lay teachers were sent to join the team.

During 1906, the four classes were transferred twice to different locations on Saint-Maurice Street. In May, 1908, the classes and the sisters who lived in the mother house moved to the new school built by the school commission and located on Chaboillez Street (today Montfort Street). One section was for boys and another for girls. Sister Sainte-Héloïse (Marie-Hermine Pion-Lafontaine) became the first superior of the school. On that year, education was provided to six classes of girls. In 1924, the school offered the complementary programme. In 1925, the school commission set up a room for a course in home economics. Several fires affected the building during the years, especially the one of December 1937 which made the structure uninhabitable. For a few months, classes were offered in rooms inside the church and on a less damaged floor of the school. The sisters returned to live at the mother house. In 1949, Notre-Dame-de-Montfort Alumni Association was established. In 1955, at the request of Cardinal Paul-Émile Léger, then the Archbishop of Montreal, the sisters of the Congrégation de Notre-Dame gave over the direction of the school to the French sisters of Notre-Dame-des-Apôtres, who wanted to teach in this country. 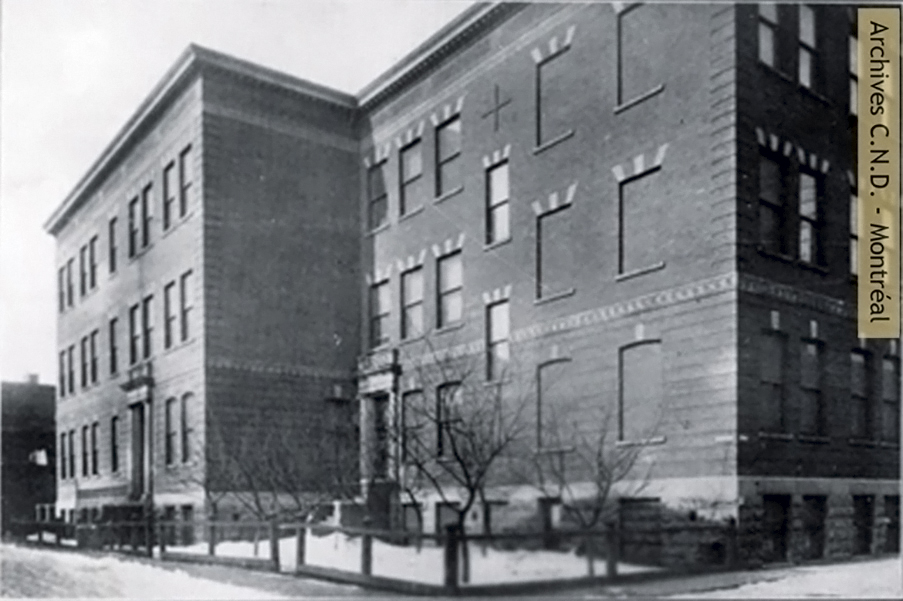