Saint-Louis-de-France School, a branch of Académie Saint-Léon, was established in 1890 by the sisters of the Congrégation de Notre-Dame. The founders of this institution, Sister Sainte-Justine (Marie Bernard) and Sister Saint-Éloi (Marie-Émelie Caron) resided in Académie Saint-Léon and commuted to school each morning and afternoon. In October, the school opened a French class and an English class in a rented building on de Bullion Street (formerly Cadieux Street); there were one hundred and twelve registered students. In February of the following year, the school fell under the direction of the Montreal Catholic School Commission. In May 1892, the issue involving the opening of Avenue des Pins Avenue was resolved. This brought about the expropriation of the building which housed the school and the institution was transferred. The lack of suitable buildings in the parishobliged the sisters to move frequently. For two months, the school was housed on the opposite side of where the previous school building was situated on de Bullion Street. In August, it was transferred to a house on Roy Street. In September 1893, it moved back to de Bullion Street in a building considered too small and unsuitable. In 1894, in order to allow a new school to be built, the school commission granted the Congrégation de Notre-Dame a fifteen-year rent allowance. In 1895, the Priests of Saint Sulpice ceded a piece of land on the North corner of de Bullion and Roy Streets for the construction of a new building. The work was completed by September of that same year. The new school opened its doors to two hundred twenty-nine students. The number of registered students increased in the following years to reach, in 1900, four hundred and fifty students, divided in eleven classes, nine French and two English. Four lay teachers were hired. In 1914, the school commission granted the school the title of Academy.

For the first time, in 1923, Saint-Louis-de-France Academy opened a class for boys making it, from then on, a co-ed institution. Two years later, theory and practical classes in Domestic Sciences were offered for the first time. For this purpose a kitchen was built in the school. In 1930, a new wave of immigration from Europe arrived in Montreal and the neighbourhood became multi-ethnic. That year, the Academy opened two classes for Hungarian children and the following year it opened a class for German children under the direction of a teacher of the same origin. In 1933, the ground floor became the chapel for the German Catholic parishioners. The Congrégation de Notre-Dame ceded the space to them when their place of worship, situated in the basement of Saint-Louis-de-France Church, was destroyed by fire that same year. By 1935, there was even more ethnic diversity in the Academy. Among the registered student population, sixteen different nationalities were represented. German students, who made up the majority, benefited from a German course and a catechism course in their language. In 1940, the Hungarian students in Grade 1 and Grade 2 were offered the same benefits. In 1945, the council of the Congrégation de Notre-Dame, at the request of Archbishop Joseph Charbonneau of Montreal, approved the sale of the school and the property to the Montreal Roman Catholic Archiepiscopal Corporation. Saint-Louis-de-France Academy became Collège sacerdotal Marie-Médiatrice. 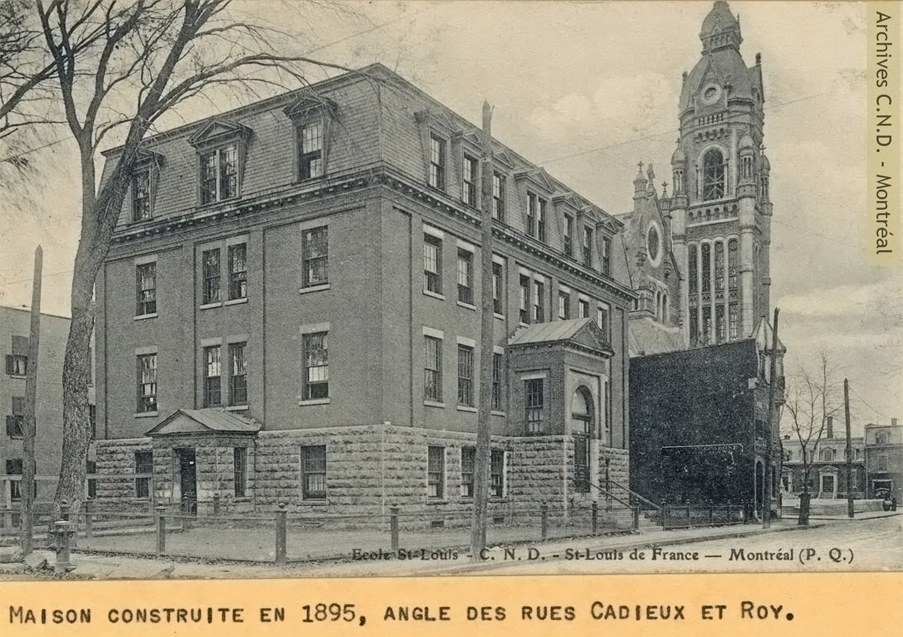