On August 26, 1943, at the request of the authorities of the Notre-Dame-des-Prodiges Parish, a group of sisters of the Congrégation de Notre-Dame left Montreal to found a school in northern New Brunswick. Their first stop was Campbellton where they were received by the Sisters of Marie-de-l’Assomption. The next day, they arrived in Kedgwick, where they were welcomed by the parishioners and their future students. The former presbytery, which was transformed into a convent, was where the four founding sisters, Sister Superior Sainte-Jeanne-d’Arc (Marie-Blanche Drouin), Sister Sainte-Marie-Gaétane (Léonile Roy), Sister Sainte-Elisabeth-du-Sacré-Cœur (Adèle Léger) and Sister Sainte-Christina-Marie (Julienne Godin) resided. On September 7, 1943, Notre-Dame-des-Prodiges convent school opened its doors to receive 204 students divided into five co-ed classes. Two lay teachers joined the sisters to provide courses to 1st to 9th grade students. Activities during the first months were disrupted by water supply problems which required using first an automatic pump, then an artesian well and finally an electric pump. From the outset, several youth groups, such as, Boy Scouts and Girl Guides, in which the sisters participated, were organized in the school. On September 18, the Bishop of Bathurst, Bishop Camille-André Leblanc, arrived in Kedgwick to bless the convent’s chapel. On November 25, the first meeting of the Parent-Teacher Association was held in the churchhall. Here, parents and teachers shared their views on education. The first term ended on December 17 with a pageant for parishioners, parents and friends, which featured singing, dancing and theater performances.

The number of students increased steadily during the 1950’s. This resulted in the opening, in 1953, of the École Centrale under the direction of Sister Sainte Marie-Gaétane (Léonile Roy). During the 1960s, the school’s student population of Notre-Dame-des-Prodiges School was at its highest and twelve sisters, eight of whom were teachers, worked there. During the 1970’s, the sisters were involved in various apostolic activities in Saint-Jean-Baptiste-de-Restigouche Parish. On December 4, 1973, the parish paid tribute to Sister Sainte Marie-Gaétane (Léonile Roy) for her 29 years of teaching by naming the new school in her honour: Marie-Gaétane School. The official opening of this high school was celebrated on October 26, 1975. In the 1980’s there was a considerable decrease in the number of students as Saint-Quentin Comprehensive High School now provided high school level education. Because the convent became too spacious, the Congregation agreed to sell it to La coopérative de l’âge d’or. In 1981, the school closed. The building became a seniors’ home named Maison Notre-Dame. The sisters moved into a residence on Saint-André Street. They were involved in different ministries, such as, evangelical sharing, “Week-ends Jeunesse,” catechism classes, meetings to prepare for baptism, Bible initiation classes and others. In 1993, on the same year during which parishioners paid tribute to the sisters on the convent’s 50th anniversary, the mission closed. 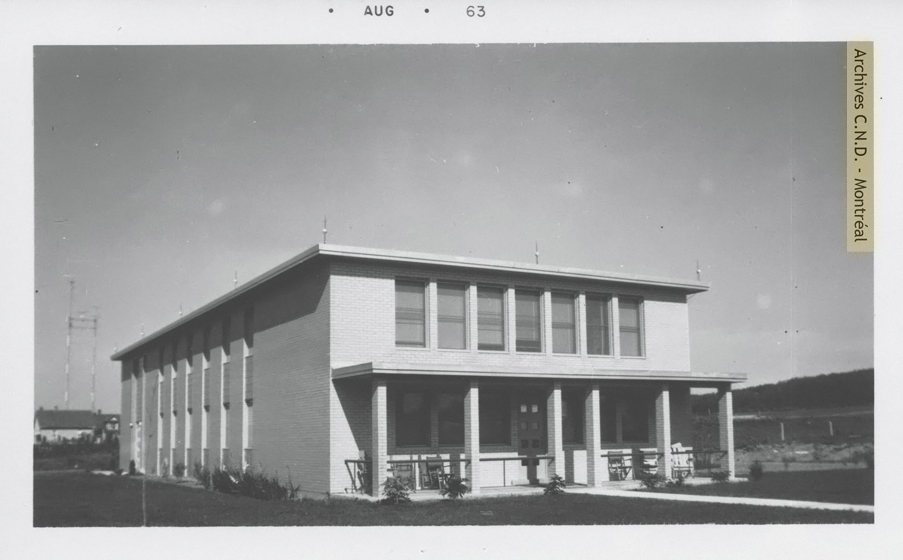