At the request of Monsignor James Rogers, Bishop of Chatham, the Congregation agreed to open a boarding school for girls in Bathust-Village in 1871. The founding Superior was Sister Saint-Hilaire (Marie-Azilda-Julie Comeau) and her companions were Sisters Sainte-Paule (Ellen Mary Lane), Sainte-Marie-d’Égypte (Marie-Louise Berthelot) and Sainte-Eulalie-de-Mérida (Marie-Herculine Frédette). The boarding school was established in Holy Family parish. In 1878, an annex was opened in Sacred Heart of Jesus parish in Bathurst-City. Two Sisters taught there every day. In 1886, Father Thomas Francis Barry requested that the Sisters have their own residence at the school. A wing was built to accommodate the Sisters’ residence on the ground floor and classes on the upper floor. At that time, the original house contained the sleeping quarters, the music room and the chapel. In 1887, with the approval of the General Council of the Congregation, the Sisters were permitted to teach boys between the ages of five and ten. The permission was, however, withdrawn the following year. For a few years, the Sisters taught catechism to children who were preparing their First Communion but could not get to the church. In 1890, during its last year of operation, the two schools had a total of 92 students, of whom 21 had taken music lessons. That year, the General Council decided to close the schools because the Education Law of New Brunswick did not permit the Sisters to teach according to the Congregation’s constitutions. The Sisters of Charity of Halifax, who had already taught in Bathurst took over the schools. 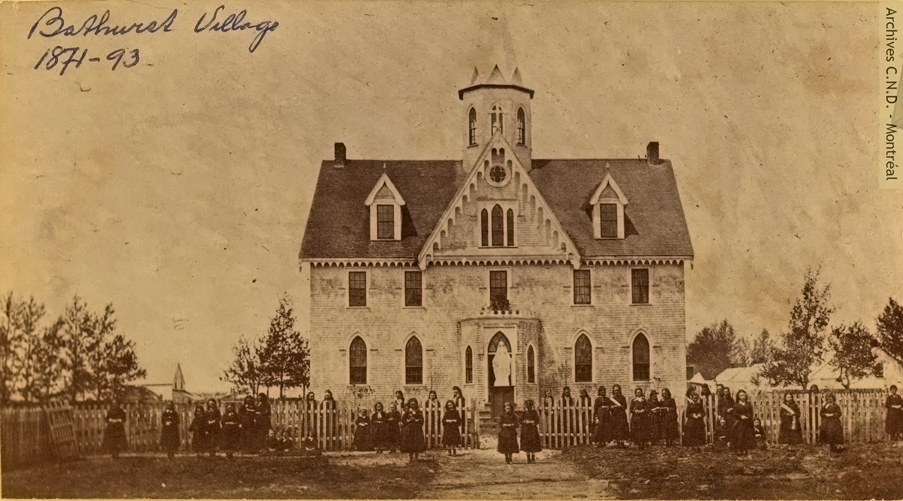