The establishment of Sainte-Marguerite-du-Lac School in Oka stems from the expansion of one of the oldest Sulpician institutions founded in Ville-Marie (Montreal): the Mountain Mission. Two of the fort towers, dating back to 1684, can still be seen on Sherbrooke Street West, in Montreal. In 1676, as a permanent institution, the mission was devoted to evangelizing and educating Amerindian girls. It is understood that the sisters of the Congrégation de Notre-Dame provided instruction to girls, while the Sulpicians were responsible for the education of boys. In 1701, while still continuing the same mandate, the mission was moved to Sault-au-Récollet, near Des-Prairies River, always on the island of Montreal. In 1721, under the supervision of Sister du Saint-Esprit (Marguerite Lemoyne de Sainte-Marie), the sisters once again followed the Sulpicians when the mission moved for the last time to the Seigneury of Lake of Two Mountains, which the Sulpicans owned. Two missionary sisters, Sister de la Passion (Marie-Anne Guyon du Buisson) and Sister Sainte-Claire (Élisabeth Courtemanche) settled there with their young students from three different First Nations: Iroquois, Huron and Nippising. According to texts written by a sister in the 19th century, they first lived in bark cabins where they also taught. The Sulpicians, however, quickly built them a convent near their presbytery. The educational activities were first funded by the King of France and later by individual donations. From 1740 to 1742, the Sulpicians built Oka’s Calvary, a worship and pilgrimage site. On May 27, 1772, a first accord between the sisters of the mission and Monsieur Étienne Montgolfier, superior of the Saint-Sulpice Seminary, assured them of a fixed annual income. The accord stated that, among other things, every year, the seminary would give the sisters four hundred fifty shillings, forty-five bushels of wheat and enough hay to feed two cows. In exchange, the Congregation agreed to send two teaching sisters, prepare the singing in the church and care for the place. Over time, the agreement was improved several times, hence releasing the sisters of certain functions and increasing their income.

In 1867, Lake of Two Mountains Mission was renamed Oka, after the Algonquin Chief, Paul Oka, which signifies “golden fish.” In 1874, Oka became an official municipality. In 1885, the convent which the sisters had occupied since their arrival had become too small; it was therefore demolished. A larger building was built further away from the river. It housed three classrooms where the sisters taught sixty girls. In September 1889, the Exaltation of the Holy Cross celebrations attracted a record number of thirty thousand people to Oka’s Calvary. On June 15, 1877, a violent fire ravaged the presbytery, the fort and the church. In December 1922, a second major fire significantly damaged the presbytery and the church. From 1931, Oka Convent was referred to as Sainte-Marguerite-du-Lac School. In 1936, the boys’ education was entrusted to the sisters of the Congrégation de Notre-Dame, and Saint-René School, until then administered by the Sulpicians, was also given to the sisters. In 1951, the sisters moved from the convent to a new building built by the Oka School Commission. They purchased the old convent from the Sulpicians with the idea of building a residence for assisted living that would be named Notre-Dame-de-l’Assomption. On January 14, 1951, on the eve of the students’ first day of school, the new building, which served as both residence and school, was blessed by Bishop Conrad. On October 22, 1954, the Oka Alumnae Association was established. In 1955, with the authorization of Cardinal Léger, the old convent, which had been built in 1885, was finally sold to the Oka School Commission. In the 1970s, the sisters continued their mission in Oka’s community. They were involved in various activities such as counselors at Camp Notre-Dame. On September 17, 1972, important celebrations were held to highlight the 250th anniversary of the arrival of the Congrégation de Notre-Dame and of the Sulpicians at the Lake of Two Mountains Mission. In 1980, the municipality of Oka purchased the old 1885 convent, located on Des Anges Street, in order to make it the town hall. 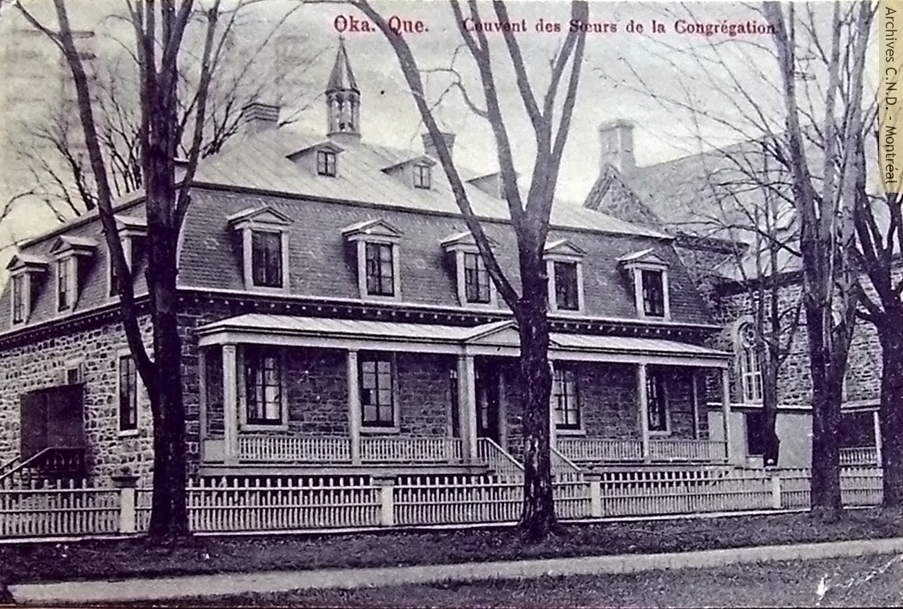