The story of the convent in Caraquet began in 1869, when it was still a mere idea in the mind of Father Joseph-Marie Paquet, the pastor of the parish, who made its construction possible by bequeathing upon his death a sum of money and a piece of land for this undertaking. During the next four years, his successor supervised construction. When all was completed, the convent received the Congrégation de Notre-Dame sisters. Travelling to Caraquet was not an easy task. On August 10, 1874, three sisters, Sister Sainte-Marie-du-Carmel (Julie Pineault), Sister Sainte-Clarisse (Annie Simpson) and Sister Sainte-Zénobie (Marie-Catherine Dionne), embarked on the ship Le Québec from Montreal for a three-day voyage to Paspébiac. The second leg of their trip, from Paspébiac to Caraquet, was as turbulent. Relieved, the sisters arrived at their destination at around four in the morning, only to find that the convent was not furnished and that, for some time, they were to lodge at the presbytery. On September 2, 1874, twenty-four students and two boarders began the school year at the new Caraquet Convent-School. As weeks passed, the number of students increased. The first year was challenging: an outbreak of chicken pox claimed the lives of some of the students; a shortage of fire wood made the winter particularly difficult for the sisters. This is not counting the conflict between Protestants and Catholics about schools which took place on January 25, 1875. The events became so heated that the Bathurst police were called to resolve the situation. Aside from these incidents, the school year at the convent-school went smoothly. Courses were given in English and French; music lessons were also offered. Some pupils also participated in associations, such as Enfants de Marie, Anges gardiens and de l’Enfant-Jésus. In addition to teaching, the sisters also worked on a farm where they cultivated hay and vegetables and raised animals. In 1903, the convent-school underwent renovations which were supervised by the architect Nazaire Dugas. In 1926, the school numbered two hundred thirty boys and girls. Boarders came from as far away as Moncton and from such regions of Quebec as Mont-Joli and Matane. At that time, the sisters also offered a bilingual business course; from 1933, the course was offered to boys. In 1933, the Notre-Dame de l’Acadie Alumnae Association for former students was established and in July 1947, a new annex was built.

In 1958, the convent-school numbered three hundred forty-three enrolled boys and girls. Most of the classes closed the following year; only grades 1 and 2 remained open. The majority of the sisters continued to teach at the regional school and at the one at Pointe-Rocheuse, which had opened ten years before as a branch. The Caraquet Convent-School celebrated its 100th anniversary in August 1974. Festivities went on for three days and included an opening parade, the unveiling of a commemorative plaque, visits from former students, a reunion social and a banquet in honour of the sisters. In 1978, because the School Commission built an elementary school in Caraquet, it ceased renting the premises to the sisters. Even though the sisters continued to teach in various parish schools, they could no longer reside in the convent as it no longer received students and was too expensive to maintain. A residence was built in the same parish on Blanchard Street; in March 1982, the sisters took possession. Sadly, a fire in 1992 destroyed the old convent leaving only the stone walls damaged by the flames. The ruins were consolidated and the location became a public place known as Place du Vieux Couvent. In June 1999, a plaque was placed on a statue of the Virgin in order to commemorate the one hundred twenty-five-year presence of the Congrégation de Notre-Dame in Caraquet. The sisters continued to work in various ministries until the residence was closed in 2008. 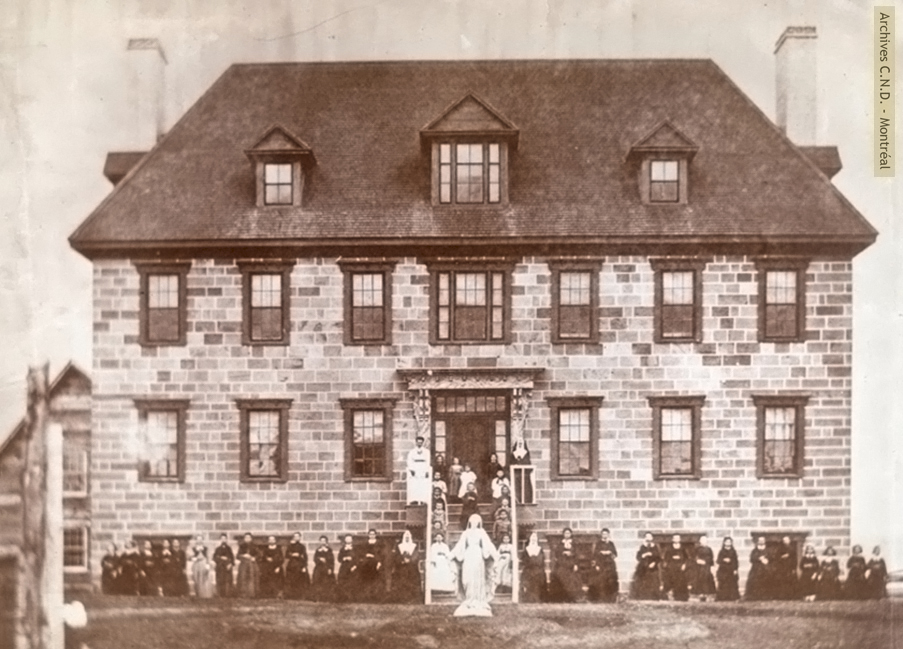 Dernière adresse : At the corner of Blanchard Street and Châtellerault Street

At the corner of Blanchard Street and Châtellerault Street