In the 19th century, Canada experienced a large wave of immigration from the United Kingdom, specifically from Ireland. Because of poor harvests in their country, many Irish families immigrated to Quebec, specifically Montreal. The founding of Our Lady of Good Counsel School met the need for an English-language school for young Irish girls in Sainte-Marie-du-Bon-Conseil Parish. In April 1891, Father John Salmon contacted the Congrégation de Notre-Dame sisters in connection with this project; in April, 1891 they accepted to establish the mission. The parish council had acquired land on Craig Street, near de l’Église, facing Académie Visitation. On this land, the sisters built, at their own expense, a lovely brick house with a stone façade and named it Our Lady of Good Counsel. In April of the same year, five English-language classes received one hundred forty-five enrolled students. Most of them were of Irish descent and had previously attended Académie Visitation. This school was considered a benefactor for Our Lady of Good Counsel School, located just across the street.

Four sisters took charge of the school. They were: Sister Sainte-Eliza (Teresa Sophia McDougall), Sister Saint-Pierre (Marguerite Duhamel), Sister Saint-Thomas-de-Jésus (Honorah Sheehan) and Sister Saint-Pancratius (Jane O’Neill). With dedication, they provided education from grade 1 to grade 9. In addition they also offered classes in music and singing. For a few years, there were also classes specifically for students whose mother tongue was French. However, due of lack of space these closed. The French-language girls were transferred to Académie Visitation. In 1920, they returned to learn English when a number of Irish families moved away, hence creating available places. Around 1930, the school curriculum changed: Grades 7, 8 and 9 were closed. In addition to school activities, the students of Our Lady of Good Counsel School were encouraged to join religious youth groups, such as Société des Enfants de Marie, Les Anges gardiens and La société de l’Enfant-Jésus. In June 1956, after sixty-five years at Our Lady of Good Counsel School, the Congrégation de Notre-Dame sisters departed permanently. 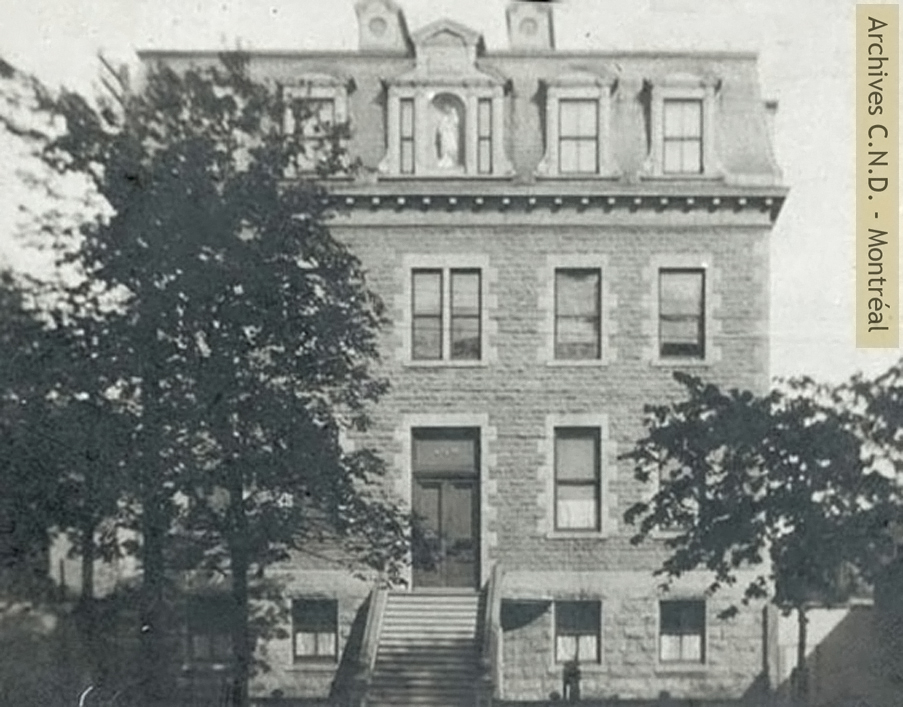 Dernière adresse : [at the corner of rues Saint-Antoine and Notre-Dame?]

[at the corner of rues Saint-Antoine and Notre-Dame?]