Opened in 1908, École d’enseignement supérieur, also known as Superior School, offered a selection of Arts, Sciences and Business courses. The bilingual school, located within the Congrégation de Notre-Dame Mother house (located at 3040 Sherbrooke Street West, today Dawson College) and affiliated with Université Laval, received both French and English speaking students. Saint Charles School’s modest business class became part the school’s English section known as Notre Dame Ladies College. Sister Saint Catherine of the Rosary (Ann Maria Cooke) became the director of the bilingual women’s business college. The courses offered in the Business Section were varied and technologically advanced. In addition to Typewriting, the school also offered language courses and courses in Bookkeeping, Business Practice, Accounting, Penmanship, Mimeography, Stenography, Indexing and more. In the 1909 – 1910 school years, there were thirty-three young women enrolled in the school; during the following years, this number steadily increased. Each year, former students returned to specialize or update their academic training. Between 1916 and 1925, another sister and five lay teachers joined the school’s teaching staff. In 1918, there were one hundred fifty-four students in the Business Section. In 1922, École d’enseignement supérieur became affiliated with the newly established Université de Montréal. In 1926, the Arts and Sciences Sections of École d’enseignement supérieur took the name Collège Marguerite-Bourgeoys and moved to the new Institut pédagogique located at 4873 Westmount Avenue (today Marianopolis College). The Business Section, still known as Notre Dame Ladies College, remained at the Mother house. It became a private, independent college whose mission was to help women take their place in society and in the business world, a world still predominantly male.

In 1935, the school changed its name to Notre Dame Secretarial School, a name it bore until the 1980s. Because of its location, the school was also familiarly called The Mother House. In fact, it was known under that name even years later when it moved into the building which had formerly housed École normale Jacques-Cartier for girls. From 1936 to the 1950s, students annually participated in writing, accounting and stenography competitions and distinguished themselves among many business schools around the world. The ever-increasing number of registrations and overcrowded classrooms numbering about sixty students forced the administration to refuse many enrollment requests. In 1956, the teaching staff comprised of five teaching sisters and four lay teachers who provided education to two hundred students. In the early 1960s, the Parent Commission brought important changes in the Quebec education system and the school adapted to this new situation. In 1962, a new stenography laboratory and a very modern writing room were added. In 1966, The Board of Directors made up of four Congrégation de Notre-Dame sisters obtained the incorporation of the school. In 1967, the government of Quebec created CÉGEPS. Once again, the school adapted to this new reality. In 1969, the curriculum was completely revised. It became a two-year program for high school graduates and a one-year program for students from colleges or universities. In accordance with the CÉGEPS’ program, there were mandatory courses such as Literature and Humanities. Students were also offered complementary courses such as Translation, Music and language courses (German and Spanish) to prepare them for careers in international organizations. In the early 1970s, the ever-increasing number of enrollments forced the administration to find additional space to receive the students. Three additional classrooms were rented in the former École normale Jacques-Cartier for girls, then situated on the other side of Atwater Avenue, at 2330 Sherbrooke Street West (today’s Mother house). In 1971, in order to be able to house all the Secretarial College’s classes, important renovations to the former normal school building (which then housed the Generalate) were undertaken. On September 13 of that same year, although the work had not been fully completed, all students began their classes on the new premises. At the students’ disposal were: nine classrooms, two typewriting rooms and a library with a collection of over 4, 500 volumes. In 1972, after many years of struggle to gain CÉGEP-level recognition, the Ministry of Education finally granted the school its official status. Consequently, the school’s graduates became eligible to obtain the Diploma of Collegial Studies and young women from all walks of life were able to obtain financial aid. In 1977, it became necessary to give the school a new bilingual name. Thus, it became Collège de secrétariat Notre-Dame/Notre Dame Secretarial College. In 1980, its name was registered by letters patent. In the mid-1980s, the number of enrollments reached four hundred fifty and the number of teaching sisters and lay teachers went from eleven to forty-five. The college, with its best-in-class practices, was, more than ever, a leader in the secretarial field. In 1981, the college adopted a logo which was designed by one of its students. In 1982, at the request of the Ministry of Education, the program underwent a profound restructuring. The new program, which lasted three years instead of two, focused much more on new technologies and computer skills. Because of the introduction of new terminology, Secretarial Sciences were from then on known as “Office System Technology (OST)”. Still in 1982, the school celebrated with great ceremony the college’s 75th anniversary. At one of the gatherings there was a large number of special guests who came to mark this important achievement. Hundreds of former students were also present. The celebration ended with a Mass of Thanksgiving in the Mother house chapel, then situated at 3040 Sherbrooke Street West. The celebrations continued with a large banquet at the Queen Elizabeth Hotel in Montreal. Graduates who wished to pursue university studies were able to call on the services of a placement director to help them continue their education. The relationships between the college and the business milieu also greatly helped recruit qualified and bilingual employees. In its 90 years of existence, the college prepared thousands of women for positions of responsibility in the business world. The school’s excellence is also measured by the continued professional training of the teaching staff who was invited to participate in seminars and conferences. The institution contributed to the advancement of women. Throughout the years, it also was able to adapt to the many changes which occurred within the educational, political and social systems. In 1992, a few years after the Ministry of Education had imposed the extended three-year program, the enrollment of mature students from the work force was much greater than that of high school graduates; recruitment became progressively more challenging. In 1994, the administration decided to close its three-year program for high school graduates but retained its two-year-for-professionals and its 3-term certificate programs. Because of the decrease in the number of enrolled students, it was finally announced that, after almost ninety years, the college would permanently close at the end of the 1996 school year. 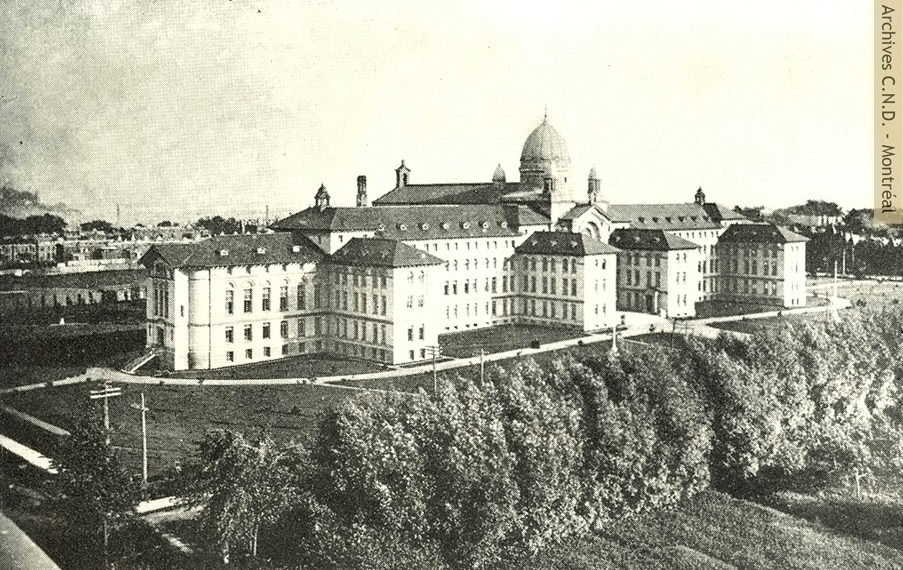 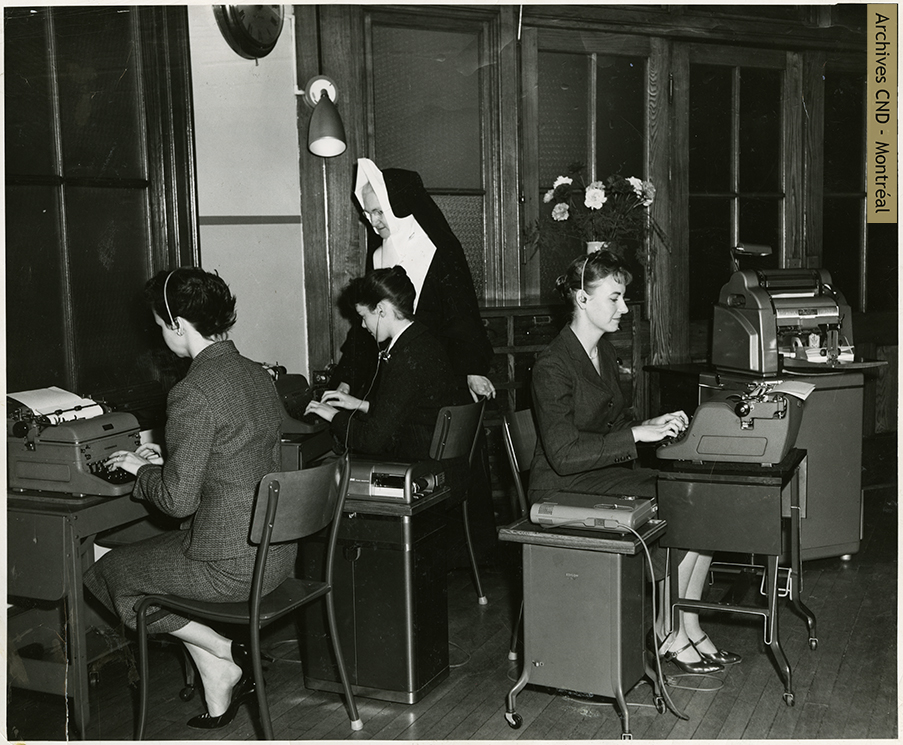 Sister Lucille Goodman supervises the work of the students in the dictaphone lab of Collège de secrétariat Notre-Dame Secretarial College, Montreal, Quebec, [between 1945 and 1960].