In the early 1950s, thinking that a little competition would be beneficial for all educational institutions in Joliette, the parishioners of Sainte-Thérèse-de-l'Enfant-Jésus Church asked the parish priest, Father Félix Gadoury, if another congregation could come and teach their children. Even though the Congrégation de Notre-Dame directed a convent school, boarding school, normal school and three parish schools, the parish priest still requested the sisters of the Congrégation de Notre-Dame and Sainte-Thérèse-de-l'Enfant-Jésus School was founded in 1952. Although the school was not yet built, classes were taught in various schools around the town by Sister Saint-Paul-Martyr (Lucile Trudel), Superieur, Sister Sainte-Berthe-de-France (Antoinette Beaulieu), Sister Sainte-Yvonne-des-Anges (Yvonne Paquet) and Sister Sainte-Cécile-de-France (Cécile Gagnon). The sisters taught one hundred seventy-seven students, one hundred and five girls and seventy–two boys from Grade 1 to Grade 7. The other institutions as well as the parishioners were very generous to the sisters of Sainte-Thérèse-de-l'Enfant-Jésus School. In addition to providing them with classrooms, they also gave them lodging, a convent, work spaces and different types of equipment to help them run the school. The school and the residence, situated on Calixa-Lavallée Street were completed at the end of the year.

In addition to academic education, the school also offered piano, singing, diction, sewing, knitting and cooking lessons, and physical education. Many receptions allowed the young women to put into practice, under their teacher’s supervision, what they learned in their Domestic Sciences classes. Sisters and students participated in a cinema club at the Congregation boarding school, where the film Flammes de charité was shown. Jeunesse étudiante catholique and Croisade eucharistique organized many events. In 1954, construction of a new wing began, according to the plans of Architect J. Perrault. In 1955, Grades 8 and Grade 9 were added. From then on, the school was known as Sainte-Thérèse School. Normal school students did their apprenticeship there. In 1957, because there were too many registered students, the School Commission decided to transfer the boys to other schools. To meet the needs of the new Grade 8 and Grade 9 programs, the Commission named an arts teacher, Father Étienne Marion, who offered lessons in diction, music theory and art history. In 1958, Paulette Gagnon, a student of Sainte-Thérèse School, qualified for the Concours d'histoire du Canada finals, organized by the Société Saint-Jean-Baptiste. In the 1960s parent-teacher meetings were organized to keep parents better informed and include them in their children’s education. A Grade 10 class was also added. In 1965, the sisters were told that they had to leave the school at the end of the school year. Many continued their mission in Joliette in one of the other Congregation’s institutions while others left to pursue other ministries. Sainte-Thérèse Elementary School is still active on Calixa-Lavallée Street and the sisters’ residence houses the Kindergarten. 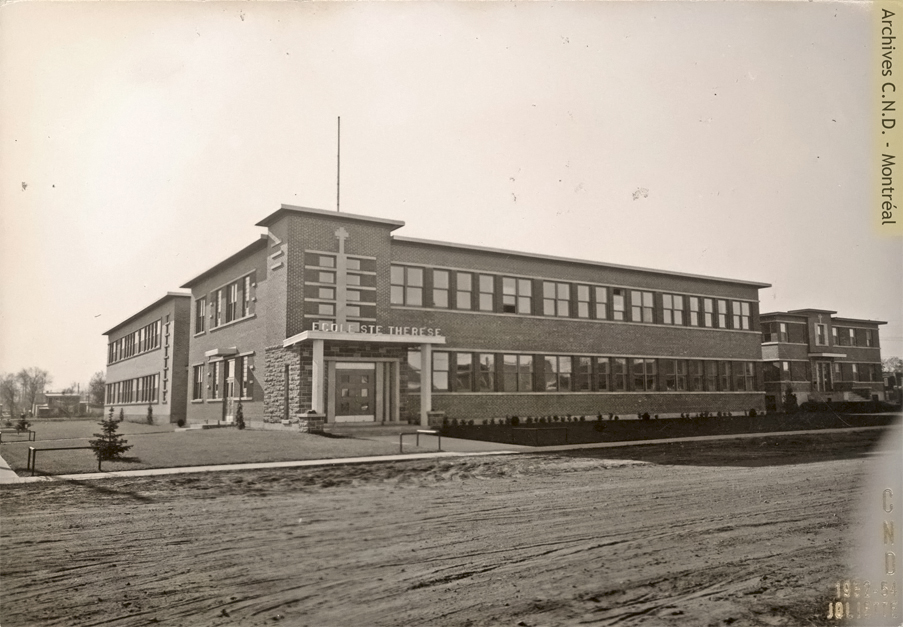