On August 5, 1877 the Congrégation de Notre-Dame founded its first missionin Îles-de-la-Madeleine at the request of Father Onésime Hébert, the Sulpician pastor of Havre-aux-Maisons Parish. At that time, the main reason for the establishment of a convent school by the sisters of the Congregation was to implement a program for the training of future teachers. Indeed, the situation pertaining to school-age children was a concern; in 1858, school was accessible to less than half of them. Responding to this urgent situation, Sister Sainte-Anne (Marie-Odile Lepailleur), Superior of the school, and her companions, Sister Sainte-Céline (Maire-Philie-Phoebé Leduc) and Sister Saint-Théophane (Marie-Louise Hébert) settled in the former Havre-aux-Maisons presbytery, which became the Notre-Dame-des-Flots Convent School. When the school opened on September 3, 1877, it received eight full boarders, fifteen weekly boarders and two day students. The sisters quickly realized that the building was too small and that plans had to be made to expand. The pastor, therefore, requested that a second boarding school be built. It was completed by November 1878. The establishment of Notre-Dame-des-Flots Convent School completely transformed the education milieu not only in Havre-aux-Maisons but throughout the archipelago. Indeed, during its first fifty years of existence, one hundred thirty students obtained their diplomas from the Bureau des examinateurs du Québec, of which fifteen obtained a brevet académique (full teaching licence, Grade 12) and forty obtained a brevet modèle (intermediate teaching license Grade 10). In addition, from 1877 to 1900, after having received their formation at Notre-Dame-des-Flots, eleven recruits became sisters of the Congrégation de Notre-Dame. During this period, almost all the elementary schools in Îles-de-la-Madeleine were indirectly influenced by the Congregation.

Nevertheless, in 1914, because of the continued lack of space, Pastor Samuel Turbide dreamed of building a stone convent in Havre-aux-Maisons Parish. This would be a first in Îles-de-la-Madeleine since stone was not abundant in this region and was difficult to transport. Pastor Turbide solicited parishioners to help dig the foundations and transport materials on a volunteer basis. The population accepted his proposal and, over a three year period, the men transported five hundred loads of stone. While the men went out fishing, the women helped the pastor with his tasks. The boarding school made of stone finally received its first students on January 16, 1919. In 1938, the Bureau central des examinateurs catholiques closed and the school lost the possibility of giving students the opportunity to pass preparatory examinations to obtain a diploma. In order to be able to issue diplomas to its graduating students, the institution had to obtain the title, Normal School. This was achieved by the superior of Notre-Dame-des-Flots in October of the same year. However, this title was only valid within the islands’ territorial boundaries; the normal school graduates could not teach in the rest of the province. For this reason, in 1942, a third year was added to the normal school program. In this way a student was able to obtain a complementary diploma recognized throughout Quebec. Because the number of students at Notre-Dame-des-Flots Convent School was ever-increasing, the superior of the. Congrégation de Notre-Dame was obliged to transfer the lower grades to other schools on the islands. Only Grade 8 to Grade 12 and the Normal School remained.

In 1955, during the visit of Premier Maurice Duplessis at Havre-aux-Maisons, the government and Congrégation de Notre-Dame authorities jointly decided to build a new normal school. This institution was an école moyenne familiale (vocational school in household arts). It was built on the same land as another building belonging to the school commission and included a section for elementary education and another for the first cycle of high school. The school was built in 1957. However, only seven years later construction of a comprehensive regional high school began. This new school consolidated all high school education. The Parent Report proposed the creation of Cegeps to replace religious teaching institutions. Notre-Dame-des-Flots Normal School closed its doors in June 1969 and the building was sold to the Havre-aux-Maisons School Commission on January 9, 1970. The parishioners sent a letter to the Congrégation de Notre-Dame asking that the sisters remain and that the parish be considered as a place for mission. They were therefore transferred to a new residence near the church and continued to work in schools. The residence at Havre-aux-Maisons received sisters until it closed in 2006. The sisters were actively involved in the community and religious life of the parish. They taught catechism, facilitated spiritual development, directed the choir called, Les Voix du Havre and lead groups of school age children: Les Brebis de Jésus and Les Étoiles du Berger. They provided help to students who needed assistance with their studies and care to the elderly and to people who were alone. 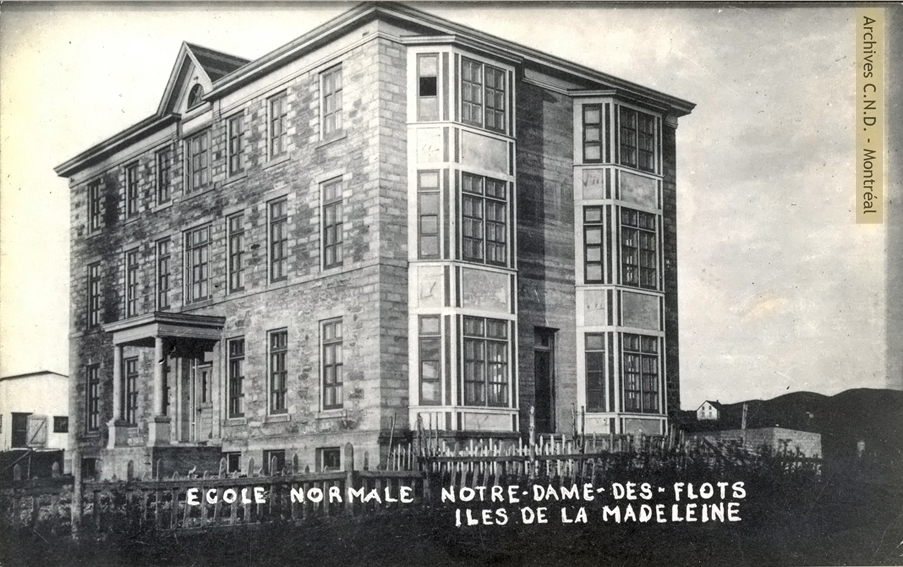