In September 1951, Cathedral School opened its doors on Johnson Street, in the east-end of Kingston, Ontario as a branch of Notre Dame Convent. Situated near the Lakeshore Native Algonquin Reserve, it was the very first Senior Elementary School established in Ontario. This new school was established in accordance with the Ministry of Education’s "Porter Plan," which stipulated that all new construction must adhere to the rule that each scholastic level have its own school building. Consequently, grade 7 to grade 10 students attended the new Cathedral School, while those in senior levels stayed at Notre Dame Convent School. Four hundred sixty students were present on the first day of classes. Most of the teachers were sisters and Sister Saint Mary Desmond (Florence Quigley) was the school’s assistant director. A business program was offered, as were courses in industrial arts, science, home economics, physical education, French and social science. The school’s emblem, especially designed during the establishment of the school, bears several symbolic elements. On the left-hand side, there is a star inspired by the coat of arms of Kingston’s Archbishop, Joseph Anthony O'Sullivan. On the right-hand side, a book and quill are references to Saint Thomas Aquinas, patron saint of boys. Represented in the centre, is a lozenge shape on a wavy band which symbolizes Saint Marguerite Bourgeoys, patron saint of girls and the Saint Lawrence River.

Cathedral School students participated in several clubs overseen by the sisters and lay teachers (dance, sciences, debating, model cars, reading, acrobatics, chess, poetry, journalism etc.). In 1953, the students launched the Drama Festival, published the first school newspaper, Cathedral School News, and broadcast a radio program. The boy’s Bantam Hockey Team won the league trophy several times while the girls won the Kingston Junior Basketball League Championship several years in a row. In 1957, an annual public speaking competition was launched in collaboration with the Knights of Columbus. In 1959, the girl’s uniform was changed. On October 4, 1961, the 10th anniversary of the school was celebrated. For the occasion, a religious service, presided by Archbishop Joseph Anthony O’Sullivan, paid tribute to Cathedral School’s three founding sisters. In 1966, the sisters permanently withdrew from the school. Still active as of November 2014, it is known by its French name, École catholique cathédrale and offers a French immersion program to students from grade 1 to grade 8. 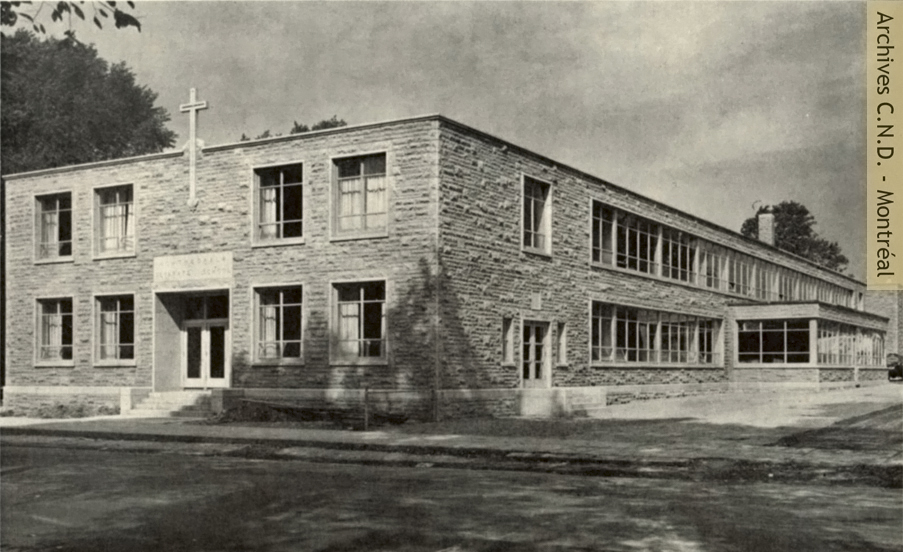