Saint Peter’s Convent, located in the small town of Port Hood, Nova Scotia, was established in 1884. Father Colin Chisholm, brother of Sister Saint-André-Avellin (Catherine Jane Chisholm), wanted to open a school in his parish. In 1879, his project was made possible by an endowment from Mr. Peter Smyth for the construction of a convent-school. While waiting for its completion, they looked for a spacious house that could house the classrooms and the sisters’ residence. The first sisters of the Congrégation de Notre-Dame arrived in August 1884. The founders were Sister Sainte-Eliza (Mary Ann Deane) and Sister Sainte-Eusébie (Marie-Jessie Proulx). The residence was blessed on September 24th, but the two classrooms remained closed because of renovations. Two additional sisters arrived the following October, in time for the beginning of the school year. They were Sister Saint-Pierre-de-la-Croix (Victoria-Anne Martel) and Sister Sainte-Marie-de-la-Purification (Marie-Émélie Lauzon). The small community of Port Hood was very generous toward the sisters. A donor offered them a piano, so that music lessons could be offered. At the official opening, on November 4, 1884, there were twenty students. On that same day, the teaching sisters were once again required to demonstrate patience. A diphtheria epidemic forced the closure of the school. It was reopened permanently eight days later. In the summer of 1886, the sisters organized a large concert to which the students’ parents were invited to attend. Various musical selections were performed in French, English and Gaelic.

The construction of the convent-school began some years later. In 1898, a three-storey building was inaugurated on a property situated near the church. On December 17, the sisters received one hundred and six students, of which seven were boarders. In 1906, work in the mines was interrupted causing a significant increase in Port Hood’s unemployment rate. Many inhabitants decided to leave the town and move to the United States or Western Canada in search of work. Two years later, work in the mines resumed. The community was deeply affected when a violent explosion caused the death of ten workers. In 1918, important renovations in the convent-school were made. The heating system was completely redone. A gas engine was installed in order to provide running water to the second and third floors. A fourth class was also added. During that year, boys were received at the convent. Of the one hundred eighty students, forty eight were boys. June 1934, marked the 50th anniversary of the foundation of Saint Peter’s Convent. A High Mass was celebrated for the occasion. In addition, a banquet and dance were organized by the Alumni Association. On January 28, 1938, an improvement was made which significantly affected life in the convent: the arrival of electricity. From the 1940s, students participated annually in the South Inverness Music Festival and won several awards. During the same decade, some of the sisters of Saint Peter’s Convent were sent to teach in Judique-Creignish School, in the County of Inverness. They commuted back and forth by taxi. In 1946, this school took the name Judique-Creignish Consolidated School. It was the first high school in Nova Scotia to be established under the Consolidated School Act.

In 1950, a metal fence was installed around the convent. Under an archway in front of the main entrance, “Saint Peter’s Convent” was inscribed in large letters, which gave the building a certain elegance. At the beginning of the 1961 school year, there were a record breaking one hundred thirty-nine students. Due to the lack of space, an additional class was opened in the parish hall. The same year, a fire destroyed Port Hood Academy, a public school which had been established in 1911. In 1962, these events made it necessary to build a new school in Port Hood and the school commission took on the task. It took the name Port Hood Consolidated School. The establishment of this new school caused the closure of a number of local ones, among them Saint Peter’s Convent. Students and teachers were transferred to the new school. Port Hood Consolidated School was a much larger school with twelve classrooms, a science laboratory, a department of domestic sciences and a library. In its first year, it received six hundred and nine students from grade one to grade twelve. The staff was made up of six teaching sisters, eight lay teachers, a principal and an assistant principal. The former convent-school with its four classrooms was transformed into a sisters’ residence, in which, thanks to Father Allan I. MacAdam, a television set was installed. In December 1970, the sisters celebrated Christmas in a new residence since the former convent, which had been built in 1898, was sold. Some sisters continued to teach at Port Hood Consolidated School as well as at Judique-Creignish Consolidated School. In 1987, they withdrew from teaching in Port Hood. In July 1991, the last two sisters of the congregation in Port Hood permanently took their leave of the residence for other missions in Nova Scotia. Port Hood Consolidated School closed in 2000. 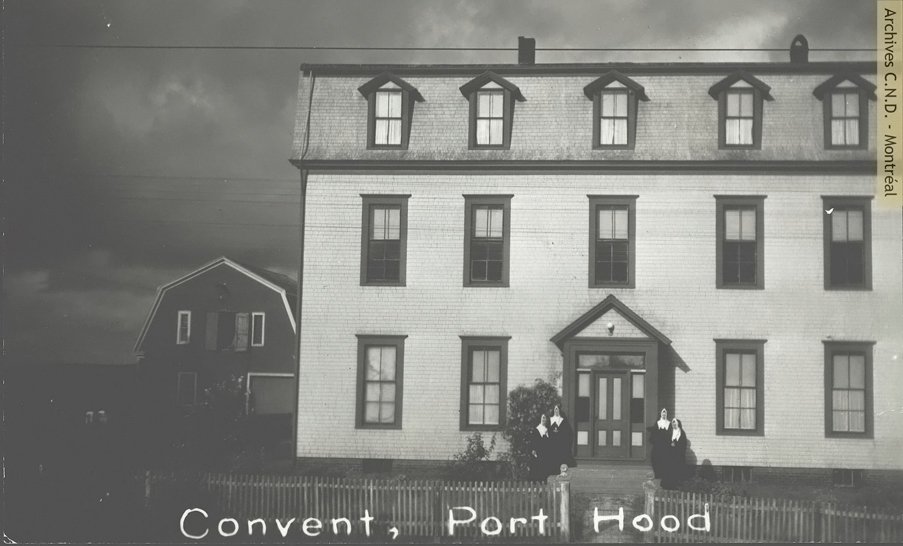