Notre-Dame-de-Lourdes School was founded to meet a pressing need for new facilities for the student youth. Indeed, in 1928, because student population of Saint-Athanase d’Iberville Boarding School had become too large, the School Commission decided to open a school in the centre of town for the children of families who lived further away. Rather than building a new school, the Iberville School Commission purchased a property at 295 6th Avenue on which renovations and repairs were started in January 1928. The Congrégation de Notre-Dame assigned four sisters to the new school: Sister Sainte-Hortensia (Germaine Kirouac), Sister Saint-Frédéric (Bernadette Perreault), Sister Saint-Celse (Marie Bisson) and Sister Saint-Pierre-des-Oliviers (Blanche Gosselin). The sisters lived in Saint-Athanase d’Iberville Boarding School and commuted morning and night by coach paid for by the Iberville School Commission. The school opened on September 3, 1928 with one hundred seventy-four enrolled students divided into four classes. On October 4, 1928, finding the classes overcrowded, the School Commission inspector decided to open a fifth class that was taught by a lay teacher.

When the school first opened, courses covered grades 1 to 5 and in 1935 grade 6 was added. The school program was gradually enhanced with courses in music theory, arts and crafts, drawing, English, home making, food preparation, sewing and physical education. The year 1938 was synonymous with innovation: The number of teachers increased to eight, two classes of boys were added, and expansion work began. The work ended in January of the following year. A third floor was opened for girls in grades 3, 4, 5 and 6. Still, the school population kept increasing until, in 1952, the Iberville School Commission opened Saint-Noël-Chabanel School in order to provide education to the children of the parish of the same name who, until then, had attended Notre-Dame-de-Lourdes School. Over the years, more classes were added and from 1953, grade 11 classes were taught. However, the ever-increasing number of students made the space insufficient. In 1955, classes had to be opened in makeshift spaces in the Saint-Charles Parish Hall. This gave the sisters hope that a new school would be built. This dream came true. On Friday, November 21, 1958, teachers and students combined their efforts to move their furnishings and equipment to the new school, which was separated from the older one simply by a door. On the following Monday, classes officially resumed. In August of the same year, the sisters moved from Saint-Athanase d’Iberville Boarding School to their new residence located in the older part of Notre-Dame-de-Lourdes School.

The teaching sisters’ daily life was made up of conferences, pedagogical days and visits from inspectors and commissioners. The students, on the other hand, went on religious retreats every year, attended Eucharistic congresses and participated in competitions and exhibitions. In 1961, in addition to the general curriculum, the older students could choose to enroll in the science curriculum. Over the years, they could add various options to their school program, such as science, humanities, art and mathematics. Religious associations were also present in Notre-Dame-de-Lourdes School: La société des Anges Gardiens, La société du saint Enfant-Jésus, La Croisade eucharistique and La Jeunesse étudiante catholique. There were also meetings of the Cercle des jeunes naturalistes. In 1965, a prefabricated school was added to the existing one. In 1966, the school was given over to lay administrators. In February 1967, the Congregation’s General Council decided to close the sisters’ residence next to Notre-Dame-de-Lourdes School. All the sisters of this mission were transferred elsewhere, except for three who continued to teach there and who communted from the Congrégation de Notre-Dame Normal School located in Saint-Jean-sur-Richelieu. 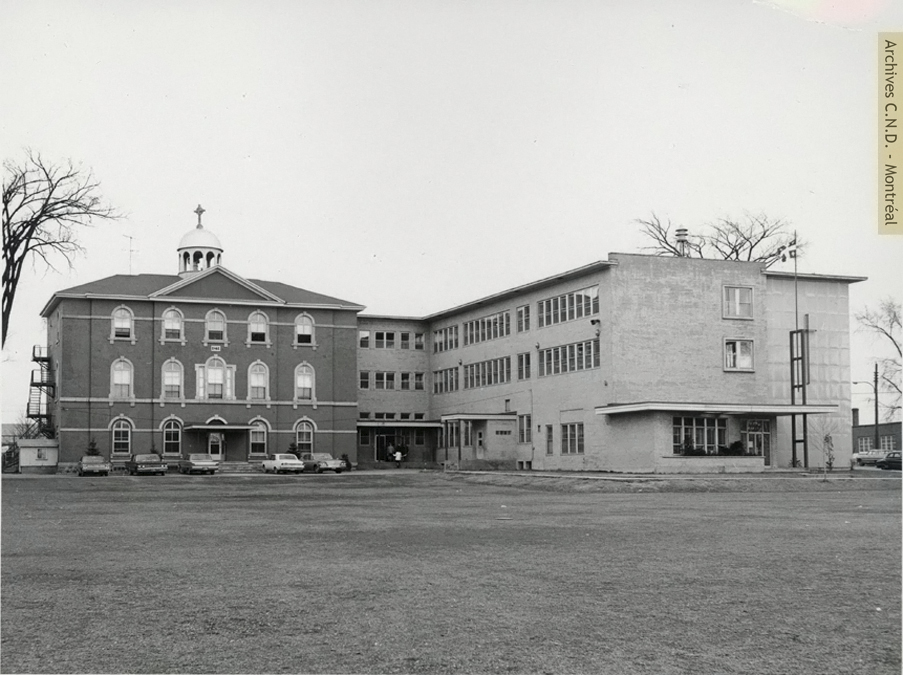