1960 was an important year for the Verdun School Commission. For a long time, it had wanted to build a large, new, modern school for high school level girls of the area. The magnificent plans were designed by the architects Armand Dutrisac and Athanase Grl. The new Margarita School was situated on Gordon Street, near Champlain Boulevard. The superior and founder was Sister Sainte-Renelle (Jeanne Fortin); her assistants were Sister Saint-Azellus (Eustelle Lavallée) and Sister Saint-Élie-du-Carmel (Laurette Martin). The sisters’ residence stood adjacent to the school. Because of a poliomyelitis outbreak, the beginning of the school year was postponed until September 15, 1959. When the school finally opened, the sisters and lay teachers received five hundred sixty-three girls divided into nineteen classes. The school offered high school level classes from grade 8 to grade 11 and the possibility of enrolling in the classical program. The grade 8 students followed the sciences program, while the grades 11 and 12 students followed the general or business programs. Even if the school was spacious, it quickly became overcrowded. The grade 8 students were transferred to Notre-Dame-Auxiliatrice School.

On February 15, 1960, the group, Young Christian Students (YCS) held its first day of recollection; the school library was transformed into a sanctuary and Mass was presided by Chaplain J. Ouellet. On May 11, 1960, the school was honoured by the visit of Cardinal Paul-Émile Léger, who blessed the premises. A grand welcome was organized. Indeed, a guard of honour formed by five hundred students marked his way. The following year, four more classes were transferred to Notre-Dame-Auxiliatrice School, and another four to Notre-Dame-des-Sept-Douleurs School. In April 1961, oral debates were organized in the classrooms. Such questions as “Yes or no, television for young women students in 1961?” were debated in order to determine the best orator. In 1962, a school choral was formed. That same year, the Department of Public Instruction awarded honorary diplomas: three sisters were recognized for their teaching of French. In 1960, in addition to YCS, the school also organized the Cercle des Jeunesses Naturalistes and the Cigales de Verdun, another environmental group. In 1964, Margarita School opened a Literature class. In 1965, the school was affected by a conflict between the teachers and the School Commission in relation to the collective agreement. Indeed, in June, two thousand students from Margarita and Richard Schools went on strike to support their teachers. In November 1966, the teachers engaged in work-to-rule, in other words, performed absolutely no task other than teaching. All other extracurricular activities in which they participated were suspended. The strike ended five months later. In 1966, the Congrégation de Notre-Dame sisters donned their new religious habits.

In 1967, many events took place. The resident sisters watched the television broadcast of the opening of the World’s Fair in Montreal. They succeeded in obtaining from the School Commission a excellent gift for all their grade 4 to grade 12 students in Verdun: a whole day at the World’s Fair. The year 1968 saw some changes: the girls’ schedules were now computer-generated and classes were now known as foyers. At that time, the school included seventeen foyers. In 1970, another group named Club des Jeunes du Monde was established. In 1974, Margarita School once again became an elementary school. The following year it took the name Notre-Dame-Auxiliatrice (not to be confused with the school of the same name 1931-1956). From 1973 to 1979, the number of teachers decreased; gradually, the teaching sisters left the school and Margarita residence. The sisters living in the residence were responsible for such tasks as bookkeeping, sewing, the kitchen and the sacristy. Some sisters had jobs on the outside. One worked in a printing shop and another was a nurse at the mother house. In 1979, the sisters left Margarita School permanently. In 1984, the school closed.

NB: This text was written using documents found in the archival holdings in our possession and does not constitute a complete administrative history of the teaching establishment.�� 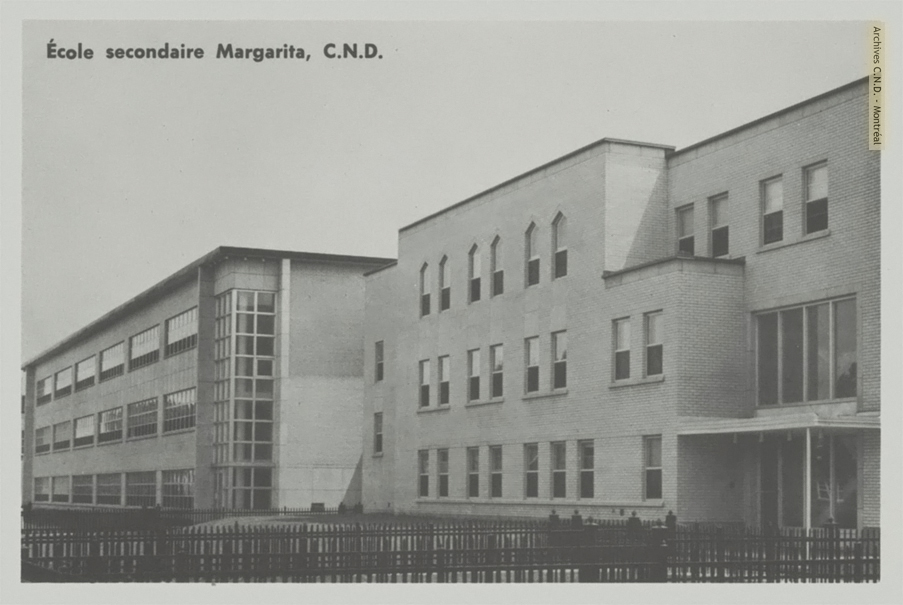