In 1913, Saint Willibrord Parish, the first English-language parish in the Verdun district of Montreal, was established. The School Commission requested three sisters of the Congrégation de Notre-Dame to provide education to the English-speaking girls of the parish. Consequently, three classrooms and a section of the music room in Notre-Dame-des-Sept-Douleurs School were opened to temporarily receive the students. In 1918, a new school, which was named École Jeanne d’Arc, was built on the corner of Rielle and Verdun Streets. The following year, sisters moved to the new school and received one hundred sixty-five girls. They shared the premises with the Brothers of the Sacred Heart, who taught the boys. Each communityhad its own residence next to the school. Sister Sainte-Marie-Vitaline (Marie-Anne Fournier) was its first superior and was assisted by Sister Saint-Cornélius (Marguerite-Olympe Robley), Sister Sainte-Marie-de-Massabielle (Mary Kurrle) and a novice. Five lay teachers were also part of the teaching staff. In 1922, it was renamed Saint Willibrord School. In 1924, because of the increasing number of students, the school was enlarged to include four new classrooms. In 1926, there were four hundred fifty enrolled students. Therefore, in 1928, seven additional classrooms were set up in the former McDonald Church, which temporarily served as a school. At the beginning of the 1930 school year, enrollments from kindergarten to grade 9 reached the one thousand mark. Two classrooms were opened in École Notre-Dame-de-Lourdes, the school adjacent to Saint Willibrord School.

In 1931, a section of the playground was restructured to make room for a new building: Saint Willibrord Primary School. Affiliated to Thomas d’Arcy McGee High School in Montreal, this school replaced the one in McDonald Church and received students from kindergarten to grade 3 (High School). At the beginning of the school year, the sisters received four hundred sixty-four girls. In 1934, the school opened a chemistry laboratory. The following year, Notre-Dame-de-la-Pentecôte Alumni Association was established. In 1940, the students were offered a Domestic Science course. In September 1946, an outbreak of poliomyelitis forced the school to close for two weeks. That same year, students, for the first time, received their school books free of charge thanks to a provincial government initiative in collaboration with the Verdun School Commission. To celebrate Marian Day, on May 14, 1954, Cardinal Paul-Émile Léger presided at Mass and gave communion to the six hundred students who had walked from the school to the Verdun Auditorium. In 1961, because of inadequate safety exits, the city’s Fire Department ordered the closure of Saint Willibrord Primary School. The sisters moved all their teaching materials to the adjacent Saint Willibrord High School, which became once again an elementary school. The school took the name Saint Willibrord Elementary Girls and Boys School. The young women who attended the high school were transferred to another Verdun school. In 1962, the sisters left the school and its direction was given to the School Board. Saint Willibrord Elementary Girls and Boys School permanently closed at the end of the 1981 school year.

École Jeanne d’Arc (1918-1922) and later Saint Willibrord School (1922-1981) were established to provide education to Verdun’s English-speaking boys and girls. They offered courses to children from grade 1 to grade 7 and later to adolescents from grade 8 to grade 11. The school was first under the administration of Saint Willibrord Parish and later of the School Commission. The teaching sisters were under the direction of the General Council of the Congrégation de Notre-Dame. 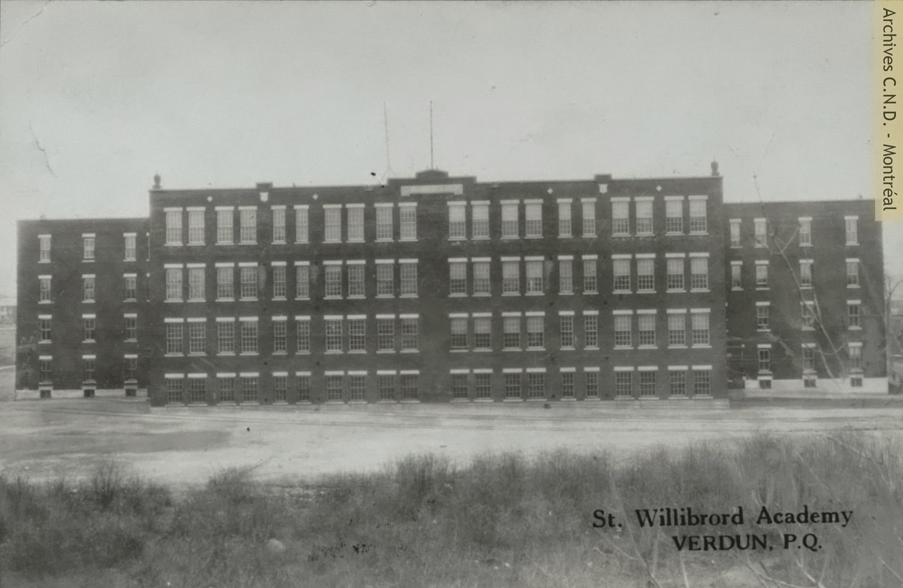