In 1886, the commissioners of Cornwall, Ontario with the approval of the pastor of Saint-Colomban, Father Charles Murray, decided to build a school known as the wood school in Cornwall’s east-end. The one hundred and twenty-five students, who attended the school situated on the corner of Edward Street and Montreal Road, were divided into two classes: one for girls under the responsibility of Sister Saint-Michel-des-Saints (Marie-Agathe Pion-Lafontaine), and one for boys under the supervision of a lay teacher, Ms. MacDonald. The sisters who taught at the wood school lived in Saint-Colomban Convent located in Cornwall West, at the other end of town. Every morning, rain or shine, they would walk to school or travel with the milk man. Bilingual education was introduced in 1888 by Sister Saint-Antoine-du-Désert (Marie-Philomène Paradis). In 1897, when the number of students had increased, an annex containing two class rooms was added and in 1901, a second sister came to teach at the wood school. In 1904, the Enfants de Marie began their activities under the direction of Sister Saint-Antoine-du-Désert. In 1907, a residence ironically known as “Château Parker” located near the school was offered to the sisters. Its first residents were Sister Sainte-Luména (Louise-Ombéline Cheval dit Saint-Jacques), Superior, Sister Saint-Raphaël-Archange (Marie-Anna Melançon) and Sister Lebel (Marie-Malvina Morin).

In 1908, music and singing were added to the curriculum. In 1924, the sisters moved to a new location on Montreal Road. A new school made of red brick was built the same year on Edward Street behind the wood school and was named La Nativité Convent School. The sisters taught elementary and high school to six hundred and sixty-three girls and boys divided into eight classrooms. On Saturday, they offered French classes to the children of the region. The French-language population continued to increase. When the school was obliged to refuse sixty students in 1927, the boys’ classes were transferred to the “Château Parker” and to an abandoned store. Classes were still overcrowded and the French and English teachers were overwhelmed. In 1930, a new school containing twelve class rooms, Saint-Louis-de-Gonzague, was built to receive five hundred boys. The eight-hundred girls were divided among La Nativité Convent School and the wood school which took the name Saint-Antoine Academy. Culturally, the 1930s and 1940s were very productive. There were many competitions in French and Catechism as well as singing and poetry recitals. In addition, a marching band was organized. In 1955, the ever-increasing number of students resulted in multiple reorganizations: several students, both girls and boys, were relocated in the new Immaculée-Conception School. The wood school was demolished and Saint-Louis-de-Gonzague School became a school for boys and girls. In January 1962, the Congregation bought the convent school. In 1965, Sainte-Lucie School opened and in 1967, all the students in east-end Cornwall were received in the new Jean XXIII School, under the direction of lay personnel. La Nativité School permanently closed but the sisters continued to teach in Immaculée-Conception, Sainte-Lucie and Jean XXIII Schools. They also became involved in the parish by giving private courses and visiting people who were alone, ill and the elderly. The convent school was sold in 1970 to the Diocese of Alexandria and at the end of June of that year the sisters moved to a residence on Montreal Road. Three years later, they moved again to a house located on 13th Street which took the name Marguerite Residence. The sisters continued to teach in public schools during the 1970s and 1980s. They also offered assistance to the needy, taught literacy to adults and carried out a pastoral ministry until Marguerite Residence was closed in 2005. 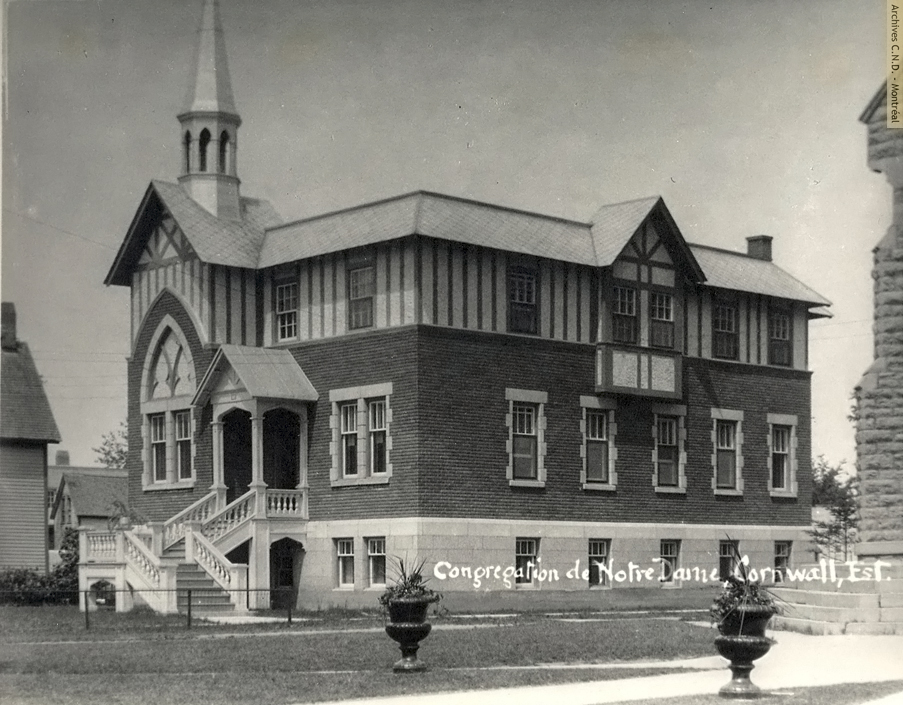