n 1943, Most Reverend Georges-Arthur Melançon, Bishop of the Diocese of Chicoutimi, approached the Congrégation de Notre-Dame about opening a boarding school in the town. The mission was established in August 1943 by Sister Sainte-Olive (Marie-Aurélie Bougie), Superior, accompanied by seven teaching sisters. A residence was set up next to the school in order to be able to also accommodate the sisters who were teaching in the branch schools. In September, seventeen classes were opened to receive six hundred sixty-nine students. During the following months, the student population considerably increased and new lay teachers were hired. In 1945, the School Commission authorized the opening of a Grade 12 class. The following year the first meeting of the Cercle du bon parler français was held. In 1947, in order to meet the needs of an ever-increasing number of students, construction of two new wings began. While waiting for the work to end, some of the classes were held in the hall of the Canadian Legion and in rooms in the union building. One year later, the sisters moved into a new location and received a total of nine new boarders. On April 21, 1949, the new building was blessed by Bishop Melançon. The students participated in the Croisade eucharistique, Société des Enfants de Marie and Jeunesse étudiante chrétienne.

In 1951, there were nine hundred nineteen young women registered. In addition to the academic program, the school also offered courses and workshops in singing, sewing, music, knitting, weaving, decorative arts, food preparation and homemaking. Various community events were organized in order to showcase the students’ achievements. In 1953, during a special radio broadcast, the students performed the play Mère Sublime, which was a wonderful success. In that same year, the normal school in Alma was established and, until 1963, it occupied a portion of the premises of Marguerite-Bourgeoys High School. In 1956, a business class was opened and three years later, a special Grade 12 science class was offered. In 1957, nine student boarders from neighbouring parishes lived in the convent school from Monday to Friday. In 1958, Saint-Cléophe School was annexed to the convent school. It was situated on du Pont Avenue and was part of Saint-Joseph Parish. A lay teacher taught Grades 1, 2 and 3 girls and boys and the direction was entrusted to Sister Sainte-Marie-Victorine (Éva Vézina). In June 1959, the crusaders of Saint-Cléophe School participated in a pilgrimage to Notre-Dame-de-Fatima Shrine in a room in Saint-Pierre School, another of the convent’s branch schools. In September of the same year, Saint-Cléophe School severed its ties to the Congrégation de Notre-Dame.

At the beginning of the 1960s, the government launched a vaccination campaign against tuberculosis; students who had received their parents’ consent were immunized. In September 1967, the school received the students from du Saint-Sacrement School, whose Grades 10 and 11 were merged with Marguerite-Bourgeoys High School; records showed seven hundred registered students. In 1969, the school offered courses at secondary 3 and 4 levels in addition to a first cycle of classical studies. At the end of 1969, the direction of Marguerite-Bourgeoys High School was entrusted to a lay man; the sisters continued teaching there. In 1970, the sisters moved from their residence in the school to make room for new classes and rented a house on Levasseur Street. They moved again on Levasseur Street West until 1975, when the Congregation bought a house on Gauthier Street West. The sisters also continued to teach in three Alma School Commission schools: Champagnat School, “Campus A” High School and Notre-Dame School in Isle Maligne. In February 1984, a project whereby students lodged in the sisters’ residence began. Its purpose was for the young women to live a humane and Christian experience. On August 20, the sisters welcomed the first boarder; by October there were four. The following year, the residence was officially recognized as a “foster home” by the Social Services Regional Centre. Until 1995, the year it closed, an average of four boarders per year were received at the residence. The house was sold to two brothers of the region. 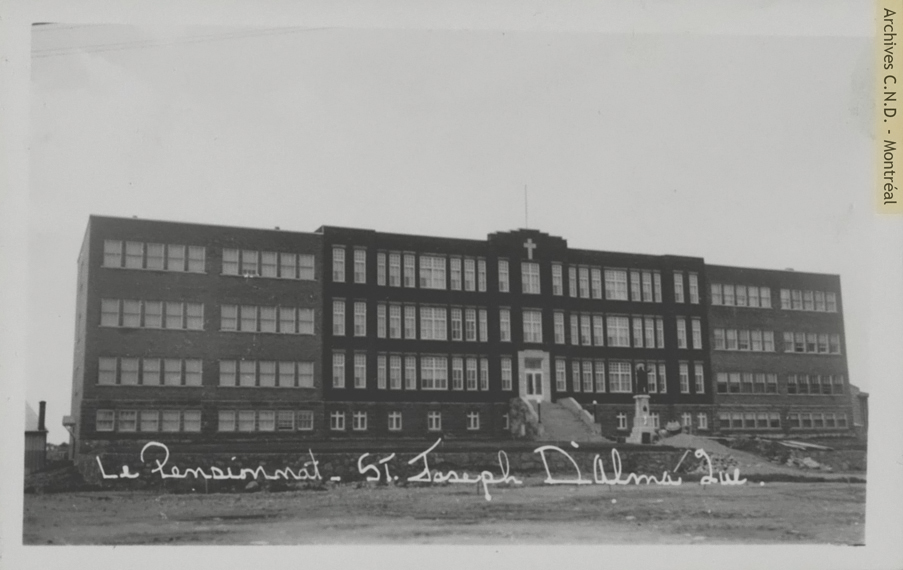