On August 10, 1874, six Sisters of the Congregation, with ten Montreal Hôtel-Dieu Sisters, left the city for New Brunswick. They boarded a ship to Chatham and then travelled to the mission in Newcastle where they found lodging for a few days. Two missions were founded: one in Caraquet and the other in Saint-Louis-de-Kent. On August 20, at the request of Bishop Marcel F. Richard, the Saint-Louis-de-Kent Convent opened. On September 1, the convent received five boarders and twenty day students. The three Sisters who established the convent were Sisters Sainte-Louise (Marie-Émilie Denis), Saint-Wilbrod (Mary McLaughlin) and Sainte-Julienne (Marie-Alexina Bourbonnais). The Sisters offered classes in French and in English. The English section followed the public school programme. The administration of the convent was, however, French. On September 19, the first Mass was held in the convent chapel. The Society of the Children of Mary was established in the school on November 21. In 1881, the Sisters took possession of a bigger building in which to hold classes. In 1888, there were thirty-six boarders and, in 1898, there were fifty. For the silver jubilee of the convent, in 1899, a wing was added to the main building using recycled materials from the former convent. In 1914, the parish offered the convent a new chapel.

In 1924, the village celebrated the convent’s 50th anniversary with a High Mass and a reunion of former students. For the occasion, the Notre-Dame-de-l’Assomption Alumni Association was established. In 1929, the Sisters took over the administration of the parish school for boys until 1938, when the classes became co-educational. A fire destroyed the convent in 1938, forcing ten Sisters and thirty-eight boarders to find lodging in different places for a few months. In 1950, the Salesian Fathers opened a college for boys; the convent returned to its original ministry. At the end of the 1950’s, the convent became a high school. This created a need for new classrooms and marked the end of the boarding school. Students from other schools of the region, including those from Saint-Ignace School, were received. In November 1961, the parish sold the convent to the School Board. The Sisters administered the convent until 1984. In August 1999, the parish celebrated the one hundred and twenty-five years of presence of the Sisters of the Congregation by organizing a reunion of former students. In August 2009, the town erected a statue of Marguerite Bourgeoys to pay tribute to the Sisters of the Congregation. 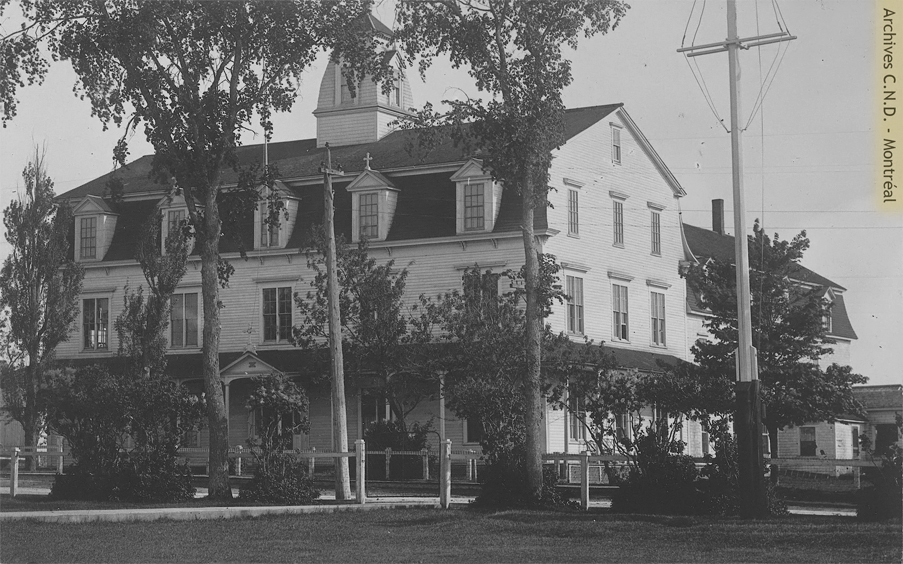