Sakura no Seibo Gakuen in Fukushima, Japan, is a modest Congrégation de Notre-Dame school. Since 1938 (barring the five years of World War II the Pacific), it has continued its mission sustained by the patience, dreams and prayers of the sisters. In 1932, five sisters were missioned to Fukushima from Canada: Sister Saint-Arcadius (Marie-Rose-Marcelline Olivier), the Congregation leader until just before leaving for Japan; Sister Marie-Damase (Marie-Laura-Emérence Gauthier, dit Landreville), nurse; Sister Sainte-Jeanne-d’Aza (Marie-Flore Antoinette Castonguay), French teacher; Sister Sainte-Marguerite-de-l’Enfant-Jésus (Anne-Marie-Rose-de-Lima Cauchon), musician; Sister Sainte-Marie-Agnès-de-la-Charité (Joséphine Dillon), cooking teacher. At that time, Pope Pius XI had appealed for “Spreading the Gospel in Asia” and missionary zeal had spread in the western world. As a result the five sisters travelled across Canada to Vancouver and took a ship to Japan. There were eighteen missionaries on the ship. When the five sisters arrived in Fukushima, they lived in a rented Japanese-style house in Shin-machi, where they struggled to familiarize themselves with the customs of Japan. It is recorded that, at that time, about thirty Catholics attended Christmas Mass in the parish church. The sisters began to teach religion on an individual basis. In 1933, two additional Canadian sisters, Sister Saint-Jean-d’Avila (Léocadie Tremblay) and Sister Sainte-Marie-Anne (Marie-Mélina Chicoine) arrived in Fukushima.

In 1935, in the area that would later be named Hanazono-cho, a two-story wooden building was erected as a convent. It was a beautiful building. Many people attended the blessing ceremony and the event was also reported in the newspaper. The central part of the building was the convent area and the south wing became the kindergarten. In 1936, when four more sisters arrived from Canada, a clinic was opened in the north wing. In 1938, the kindergarten named Hinagiku (Marguerite) Kindergarten opened. At that time, Japanese women began to join us and everyone believed that the flower of Congrégation de Notre-Dame education had begun to bloom in Japan. In 1937, however, war between Japan and China began. In December 1941, when the United States entered World War II, our Canadian sisters were considered the enemy and lost their freedom. From 1942 to August 1945, they were interned in Aizu-wakamatsu with three Japanese candidates: Sister Tomiko Saito (Sainte-Maria-Hostia), Sister Tome Sasamori (Sainte-Thérèse-de-Marie) and Sister Kimi Ogata (Sainte-Angéline-de-Jésus). During that time, Hanazono-cho Convent became an internment facility for foreign prisoners from many countries who had been captured aboard ships in or near the war zone. When the war ended in August 1945, the sisters returned to Fukushima. Other Japanese women soon joined us. In 1946, nineteen war orphans were welcomed in our convent. At last our Congrégation de Notre-Dame education ministry began. Sakura no Seibo Elementary School was founded for the orphans who were of school age. The kindergarten reopened and, gradually, the junior high school, senior high school and junior college were founded to meet the needs of the students as they grew older. Sakura no Seibo Gakuen’s educational program totalled sixteen years. After the war, as the relationship between Japan and North America improved, many sisters came to Japan from Canada and the United States. We increased to forty and the majority taught at Sakura no Seibo Gakuen. Currently, there are fifteen Japanese and Canadian sisters working full-time at Sakura no Seibo Gakuen. Fukushima is primarily an agricultural area, In March 2011, after the triple disaster that hit Northeastern Japan, the number of students decreased significantly. At present, there are about one thousand, one hundred students.

Less than one percent of the population of Japan is Catholic. As a result, the majority of students and their parents are not Catholic, but they are very open to Christianity. The students say the Our Father and Hail Mary every day, and welcome the message of love and justice into their lives. It is a work of evangelization that requires patience and perseverance. However, in every period of the Congregation’s history, Marguerite’s daughters have earnestly and sincerely spread the Good News which, we believe, have penetrated the hearts of at least some of our students and their parents. 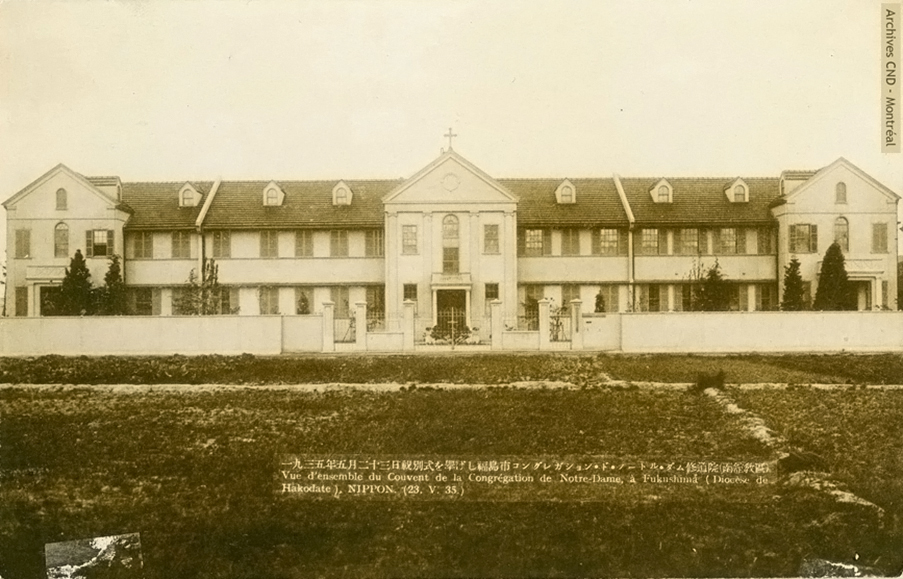 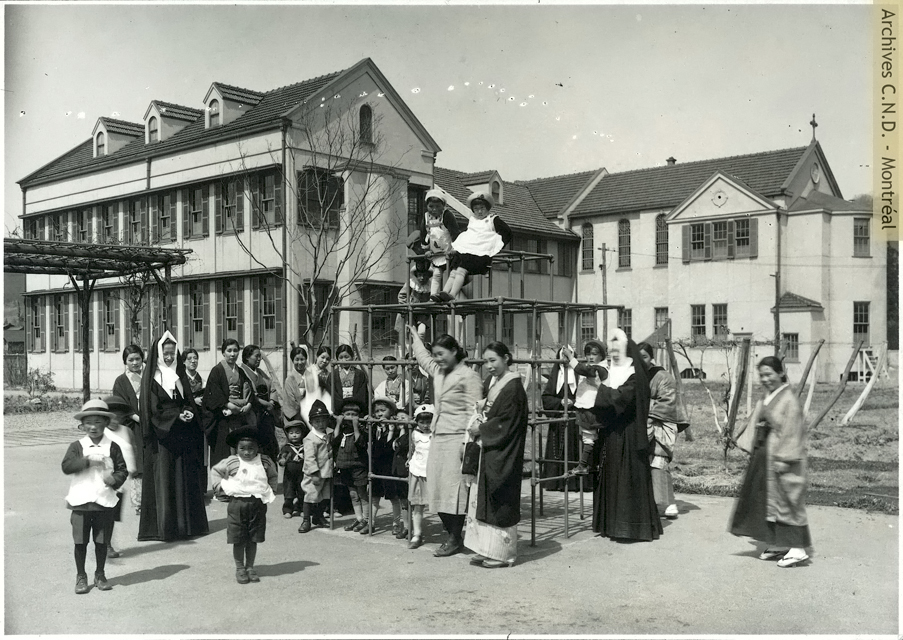 Religious and lay teachers on the playground with the students, Fukushima, Japan, 1938. 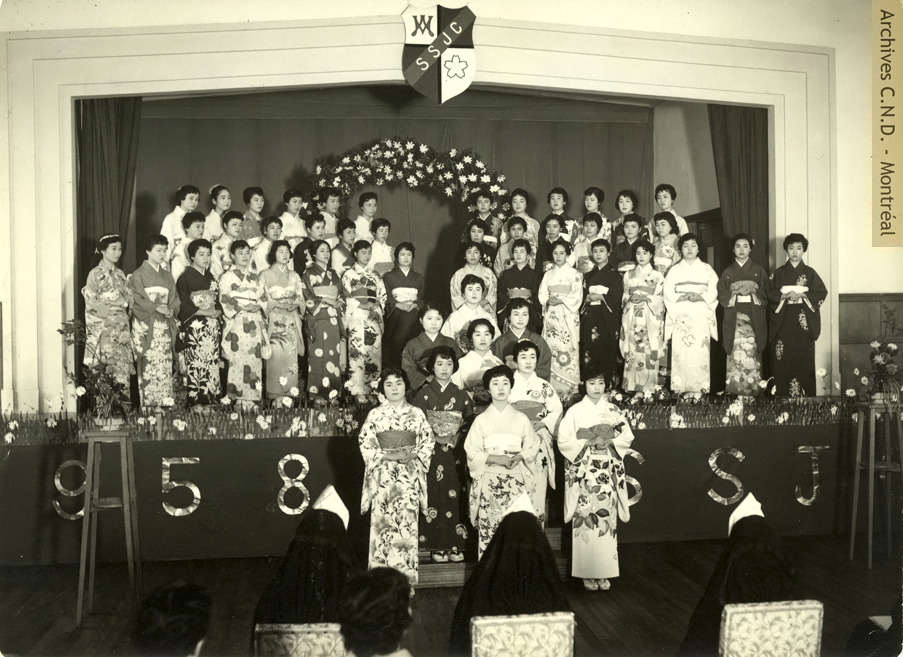 Group of graduates from Sakura no Seibo College dressed in ceremonial kimonos ("Our Lady of the Cherry trees" High School), Fukushima, Japan, 1958.

Religious and lay teachers on the playground with the students, Fukushima, Japan, 1938.

Group of graduates from Sakura no Seibo College dressed in ceremonial kimonos ("Our Lady of the Cherry trees" High School), Fukushima, Japan, 1958.