Saint Columban School was established in 1885, at the request of Father Charles Murray, of Saint Columban Parish in Cornwall, Ontario. Located on Augusta Street, the house funded by the parishioners was also the sisters’ residence. Three sisters of the Congrégation de Notre-Dame arrived on January 5, 1885 to provide education to the children of Cornwall. They were: Sister Sainte-Marie-Françoise (Catherine Deane), Superior, Sister Saint Mary Jane (Margaret Byrnes) and Sister Saint-Michel-des-Saints (Marie-Agathe Pion-Lafontaine). They taught over one hundred students. In 1885, the sisters began to offer classes in French. The result was an increase in registrations; by late June they had reached two hundred fifty. In 1886, French-language parents requested the construction of another school, this one in the east end of the city. The new school was situated on the corner of Édouard Street and Montréal Road. It was named École de la Nativité. From 1887, the sisters teaching in this school resided in Saint Columban Convent until they were offered, in 1907, a residence situated nearby. Very soon, music became the school’s vocation. A piano was acquired in order to be able to offer music lessons to the students. A very real tradition was born. Every year, the school organized a recital which would demonstrate the students’ talent to the parishioners. In 1927, an additional wing for six classrooms was built. At this time, the convent was thriving. The student population continued to increase and the Congregation received praise from both civil and religious authorities. Quickly, education at Saint Columban became a reference for the rest of Ontario. The sisters also acquired specializations which made them, in everyone’s opinion, true professional educators. Their education program was even recognized by the Ontario Department of Education. The sisters were also members of the English Catholic Teacher Association. In 1938, the school received five hundred seventy-five students.

On September 5, 1945, an earthquake that shook the entire town seriously damaged the convent. The damage was so severe that the Congregation had to demolish and rebuild the chimneys as well as have major masonry work done to the exterior walls of the building. However, the work progressed slowly because of the social and economic context caused by World War II. In 1960, the 75th anniversary of the sisters’ arrival in Cornwall was celebrated. Over four hundred guests attended the banquet. When, in 1959, the Frères de la Présentation withdrew from providing education to boys and left the City of Cornwall, the sisters took their place. For the first time, boys and girls shared classrooms from kindergarten to grade 8. In 1962, Saint Columban Parish ceded the convent’s property to the Congrégation de Notre-Dame. The former convent which dated back to 1884 was demolished. In its place was built a more modern structure, Notre-Dame Convent, designed by the architect Peter Dickinson. Always committed to teaching young people, the Sisters of the Congrégation de Notre-Dame not only taught in schools under their direction; they were also involved in other local schools. From 1967, many sisters also taught in Bishop MacDonnel School and Sacred Heart School. In 1985, Saint Columban Parish organized a special Mass to highlight the 100th anniversary of the sisters’ presence in Cornwall. In 1990, Notre Dame Convent permanently closed. 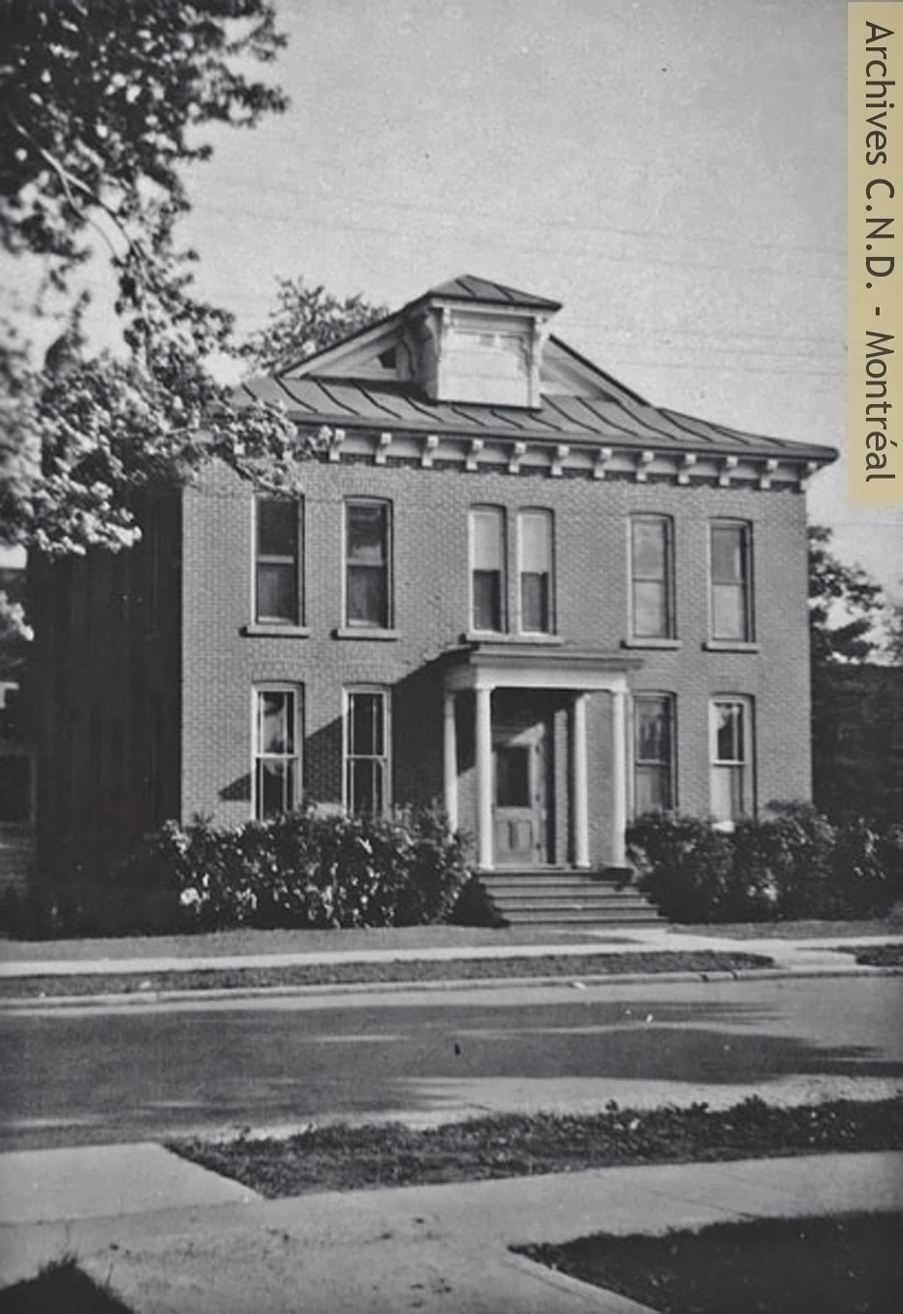