In 1868, Father Gaillard asked for teachers for the Diocese of Monsignor Joseph-Bruno Guigues, Bishop of Bytown (Ottawa). The General Councilaccepted the mission and the Sisters opened a school in Saint Patrick’sparish, where the pastor was Father Collins. The founding Superior was Sister Saint-Gabriel (Ann Darragh) with Sisters Sainte-Caroline (Marie-Cordélia Baby), of the Nativité-de-Jésus (Marie-Thérèse-Elmire Pinsonneault), Sainte-Claire (Margaret Kennedy), Sainte-Ernestine (Marie-Amélie Méthot) and Sister Sainte-Marie-de-la-Croix (Catherine-Adèle-Suzanne Saveuse de Beaujeu). The Sisters lived in a house situated on the corner of O’Connor and Maria (now Laurier) Streets. The first classes were held on October 21,1868. In 1869, the Victoria Hotel, located on the corner of Wellington and O’Connor Streets, was rented to welcome boarders. Boarders and day students were offered instruction in both English and French. In 1871, a property was bought on Gloucester Street, on the corner of Nepean Street. A five-storey convent with its accessory buildings was built in 1872. Three years later, a wing was added to the building. In 1909, the Soper House, on the corner of Metcalfe and Nepean Streets was purchased and renamed Saint Joseph House. The 50th anniversary of the institution was celebrated in 1918. In 1923, another property was bought on the corner of Metcalfe and Gloucester Streets, where courses in home economics were offered. In 1925, a wing connecting all the buildings was built. In 1926, the purchase of the Renaud property, located on Nepean Street, was finalized to house the Business School. Some teachers also taught in annexed schools, for example, Saint Patrick’s School as of 1926 and Saint Theresa’s as of 1930. In 1933, Notre Dame College opened its doors, occupying the first floor of Saint Joseph House. In 1948, the community purchased the Rogers House, situated on Elgin Street, which became the exclusive residence of the College in 1948. In 1949, a Sister bequeathed the house on Nepean Street. It contained a kitchen, a refectory and additional rooms. As of the 1952-1953 school year, the College and the boarding school were completely separated. In 1956, the French section was closed and the juniorate opened (for newly professed Sisters). In 1959, the search for a location to build a new and more modern campus led to the purchase of lots on Heron Road in the Alta Vista district, near Queen of the Angels Primary School, which became one of the Congregation’s schools in 1960. Activities on Gloucester Street ended in 1965 and were replaced by the English Campanile Campus and the French Campus on Heron Road. Gradually, the Congregation sold its former down-town properties or had them demolished. 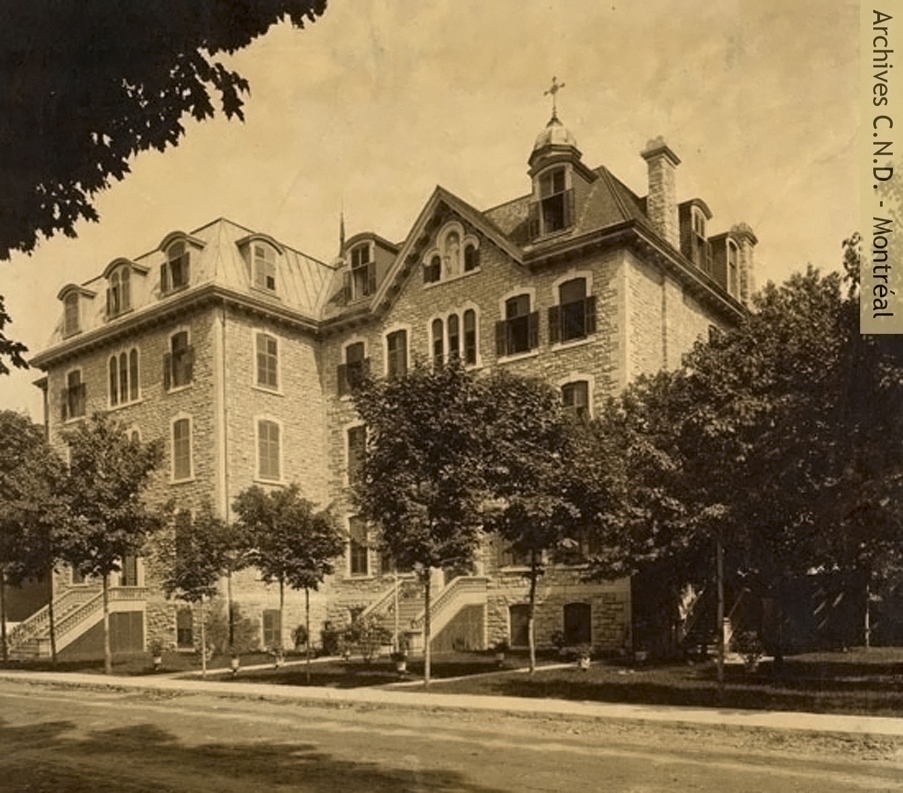 Dernière adresse : O'Connor Street, at the corner of Laurier Street

Dernière adresse : At the corner of O'Connor Street and Wellington Street

Dernière adresse : Nepean Street, [at the corner of Elgin Street?]