Notre-Dame-de-Lourdes School was established in 1956 at the request of Father Joseph-Arthur Tremblay, pastor of Saint-Gabriel-Lalemant Parish. The building, built that same year and located on the corner of Saint-François and Saint-Antoine Streets, had three stories and nine classrooms. Father Tremblay named the school Notre-Dame-de-Lourdes at the request of Bishop Georges Cabana, archbishop of Sherbrooke who wished to give the schools in his diocese Marian names. The administration of the school was entrusted to Sister Saint-Lucien (Marie-Jeanne Tremblay) of the Congrégation de Notre-Dame. She lived on the third floor of the school with three teaching sisters; Sister Saint-Victor (Rolande Hébert), Sister Sainte-Thérèse-Marguerite (Thérèse Champoux) and Sister Sainte-Clémence-du-Portugal (Clémence Landry). In September, the school opened for the first time and was immediately filled to capacity; there were two hundred sixty-three registered students. Six lay teachers were also part of the teaching staff. In November, Bishop Cabana blessed the school. The following year, two pianos were offered to the school: the first by the School Commission and the second by the citizens of the area. These instruments were essential to being able to offer piano and singing lessons, for which a fifth sister, Sister Sainte-Gracia-Marie (Marie-Isabelle Massicotte), was responsible. In that same year, Croisade eucharistique was established at the school.

In 1958, registrations increased and the School Commission decided to send Grade 6 and Grade 7 boys to the school of the Frères du Sacré-Cœur. The Grade 1 students occupied the emptied space. The following year, the twelve Grade 7 girls were given a Grande distinction mention after having passed the exams of the Department of Public Instruction. The school came in first among the Windsor elementary schools. In the winter of 1961, during a day off, the sisters took the opportunity to ride on a snowmobile. In September 1962, English and diction classes were added to the curriculum and two lay teachers were hired. Sometime later, a teachers’ strike caused the school to close for one month. In 1964, the Windsor chief of police gave presentations on road safety at the school; he congratulated the director for the students’ proper conduct. The following year, the increasing number of registered students obliged the School Commission to add a space in the building for some twenty Grade 2 students; a Grade 5 class was also transferred to the basement of a house which belonged to Fernand Dion. In 1969, the administration of the school fell under the direction of lay personnel and the three remaining teaching sisters were responsible for the Grade 2 and Grade 6 classes. Four years later, the School Commission decided to convert the sisters’ residence on the third floor of the school into classrooms. The teachers left the premises in July 1973. 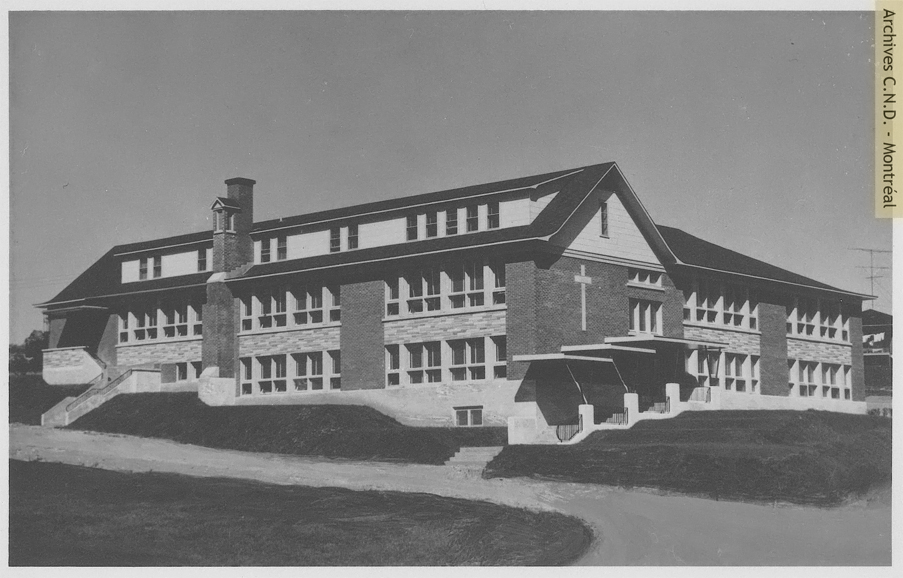